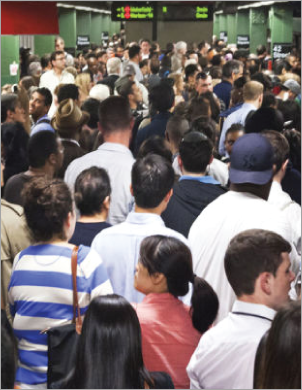 New Yorkers are efficient, direct and fast moving. Their commutes: anything but. In this data analysis, we examine New Yorkers’ commutes by neighborhood and across industries.

This research was made possible through general operating support from the Bernard F. and Alva B. Gimbel Foundation, the Lucius N. Littauer Foundation and the M&T Charitable Foundation.

This data brief details the average commute times for each of the city’s neighborhoods; compares commuting times for workers in different industries; shows which forms of commuting (car, transit or walking) are most prevalent in each neighborhood; and shows that the number of residents commuting to work in their own borough continues to rise.

While nearly every New Yorker suffers through a long commute, the length varies depending on the borough and neighborhoodsi where they reside.  Average commutesii range from 53 minutes in the Rockaways to 26 minutes in the Financial District and Greenwich Village. In other words, over the course of a five day work week, Rockaway residents will spend four hours and 29 minutes more time commuting than those who live in Downtown Manhattan. Of the ten neighborhoods with the longest commutes, four are in Brooklyn, four are in Queens and two are in the Bronx. Of those with the shortest commutes, all but one is in Manhattan. However, even in neighborhoods closely located to the Manhattan jobs centers, commuting times are extensive. The average commute for residents of Astoria is 38 minutes and for Williamsburg, 36 minutes.

Many New Yorkers avoid commuting altogether. In six neighborhoods, more than seven percent of employed residents are primarily working from home (Upper West Side, Park Slope/Carroll Gardens, Chelsea/Clinton/Midtown, Stuyvesant Town/Turtle Bay, Greenwich Village/Financial District and Brooklyn Heights/Fort Greene). Interestingly, it is those neighborhoods with the closest proximity to job centers and the best transit options that have the highest share of residents who work out of their home. The number of New Yorkers working from home increased by 68 percent from 2000 to 2014 and now represents 3.9 percent of the city’s working population.

Queens residents are the most likely to work outside of the city. Thirteen percent commute to jobs beyond the five boroughs, followed by the Bronx (12 percent), Staten Island (9 percent), Manhattan (8 percent) and Brooklyn (6 percent).

Beyond neighborhoods and boroughs, commuting patterns also vary by industry. In several sectors, for instance, a large share of employees do not live in New York. In the city’s utilities sector, 40 percent of employees commute from outside of the city. Other sectors with a high share of workers commuting from outside the city include finance and insurance (38 percent) and government (30 percent). By contrast, the preponderance of those working in New York’s lowest paying sectors—retail, tourism, food services—reside inside the city. All but 10 percent of employees in accommodation and food services, 15 percent in retail and 15 percent in healthcare live in New York City. On the whole, 79 percent of jobs in the New York are filled by city residents. This has changed little since 2000, when 78 percent of New York jobs were occupied by city residents.

Given the large share of non-New Yorkers working in the city’s finance and insurance sector, it is unsurprising that it is the industry with the longest average commute: 51 minutes. It is followed by construction (50 minutes), public administration (48 minutes) and manufacturing (48 minutes). Employees in the educational services sector, on the other hand, have the shortest average commutes (40 minutes), followed by those working in arts and entertainment (41 minutes), real estate (41 minutes) and retail (42 minutes).

To reduce commuting times for those living inside and outside of New York, the city will have to improve and expand its transit options. To this end, the Center’s 2014 report on New York City infrastructure, Caution Ahead, offered several recommendations for increasing the efficiency of the city’s subway system and financing expansion.

First, it recommended an accelerated schedule for the modernization of the MTA’s signal system. Adopting Communications Based Train Control across the subway system will increase the frequency and speed of the city’s trains.

Second, it recommended the adoption of the Move NY plan, introducing tolls on the city’s East River bridges. The plan would generate $1.5 billion in net annual revenue for the MTA, helping to improve state-of-good-repair and to finance system expansion.

Finally, while the MTA operates over 20 LIRR stations in the five boroughs, few New Yorkers use the service because of its high fares and its poor integration with the subway MetroCard. Reducing fares and integrating payment and transfers within the city could dramatically reduce commutes in transit deserts like northeast and southeast Queens. 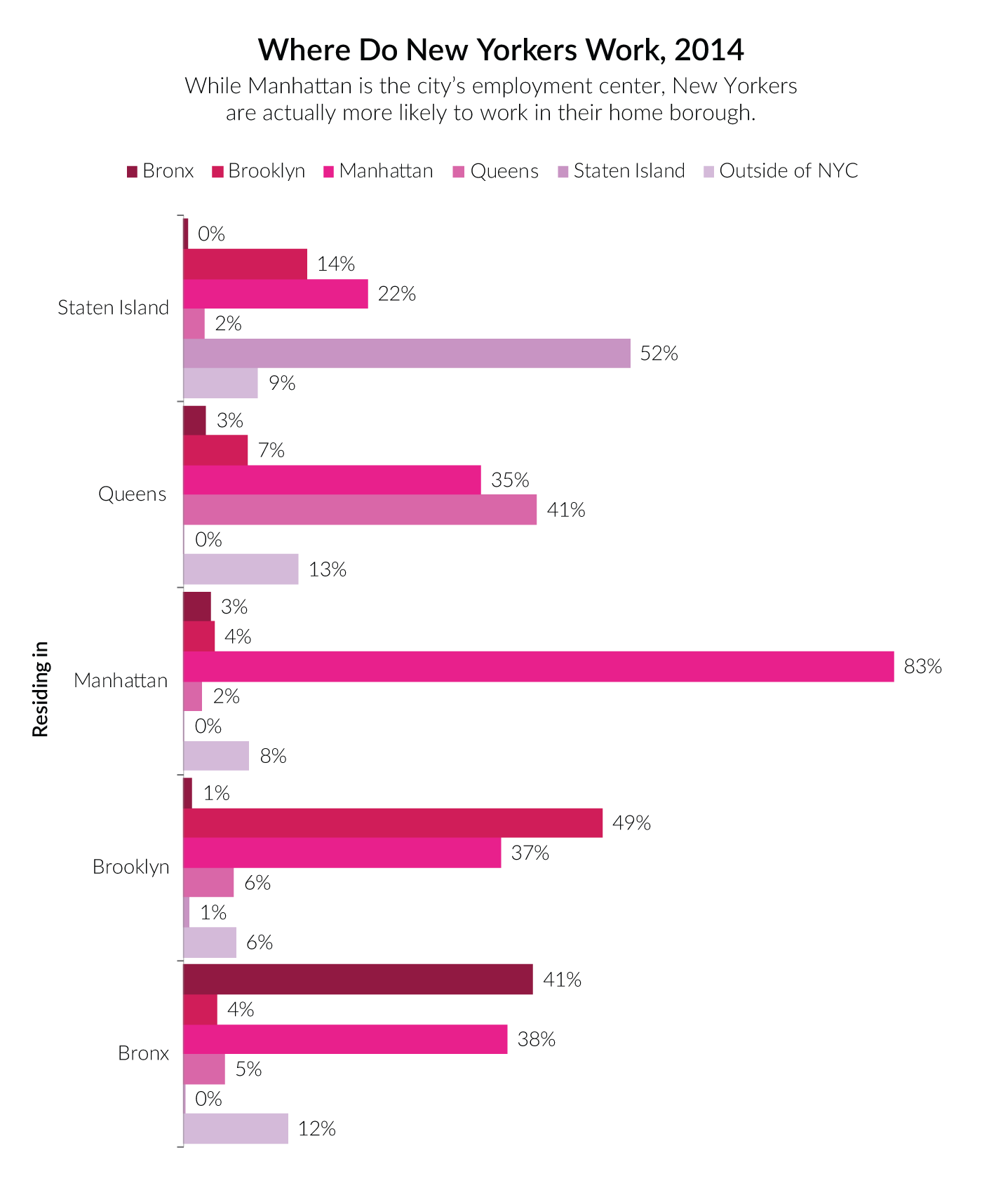 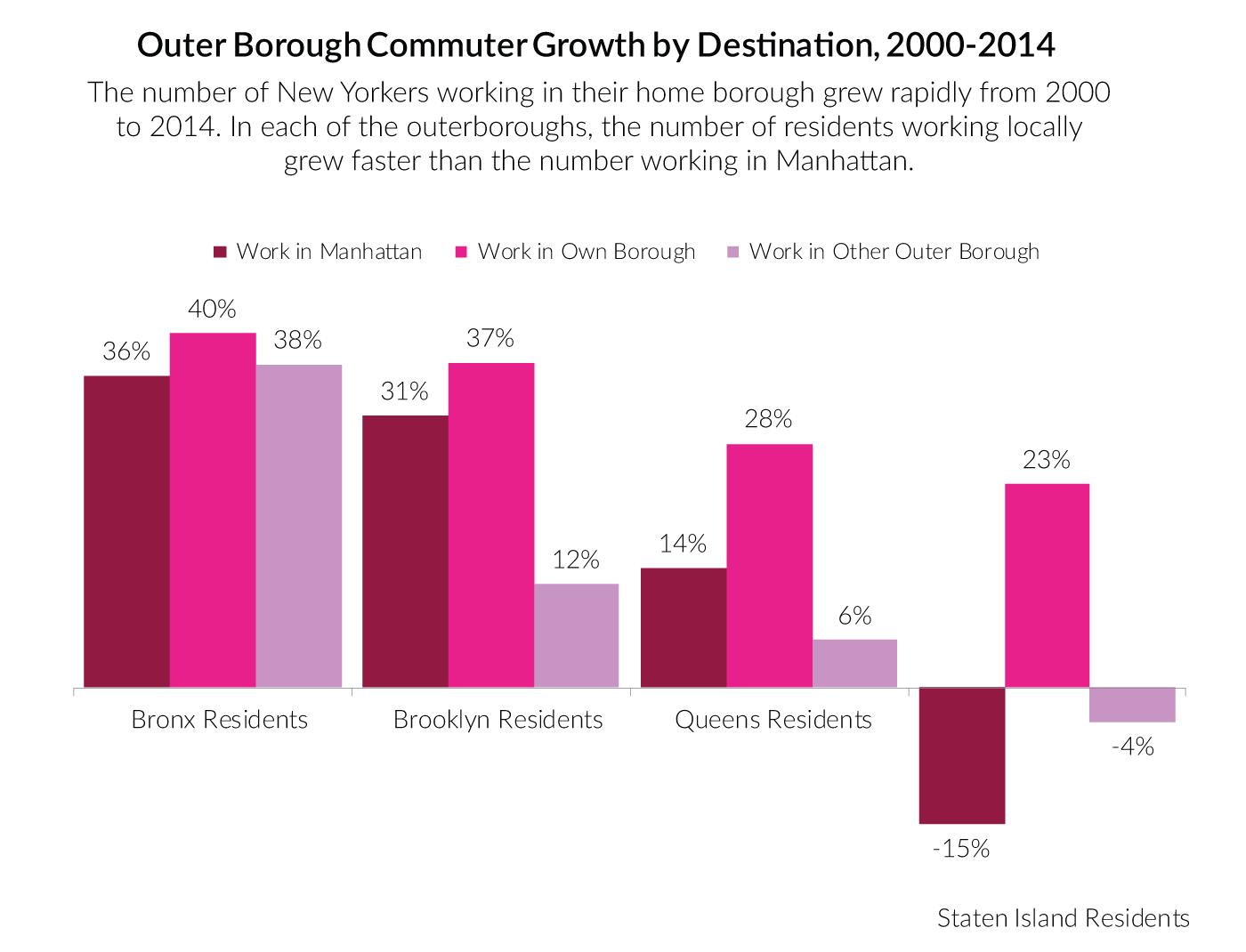 1 This data brief is drawn from the U.S. Census Bureau’s 2014 American Community Survey.
2 Average commuting times exclude those who do not work or work from home.

Looking at commutes in every Brooklyn neighborhood

New Yorkers’ Commutes Not Getting Any Shorter Any Time Soon

How Many Of Your Neighbors Actually Drive To Work?

Queens neighborhoods have the worst commute of all NYC, study shows

B’hurst Among Nabes With Longest Work Commutes In NYC: Study

Report details which New York City commutes are the longest

Looking at commutes in every Brooklyn neighborhood
Technical.ly

Looking at commutes in every Brooklyn neighborhood
Technical.ly