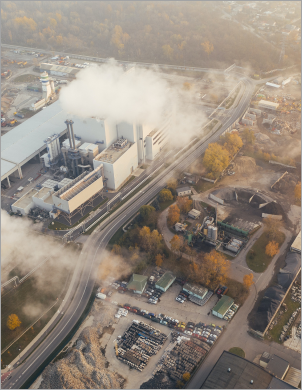 While greenhouse gas emissions from city-owned buildings have decreased since 2014, this new analysis reveals 8 of 25 city agencies have seen emissions increase, including a 15 percent spike at the CUNY. More progress will be needed to achieve the city’s goal of net-zero carbon emissions by 2050.

by Charles Shaviro and Eli Dvorkin

As New York City's largest property owner, the City of New York will have to make swift and sustained progress in reducing greenhouse gas emissions from the buildings it operates to lessen the city's carbon footprint and tackle a major driver of climate change. A new analysis by the Center for an Urban Future reveals that while the intensity of greenhouse gas emissions from city-owned buildings has decreased 9.6 percent since 2014, eight of 25 city agencies have experienced emissions increases.1

The greatest emissions increases have been among the 117 City University of New York (CUNY) buildings included in the city's data, which registered a 15 percent rise in emissions intensity from 2014 to 2019. Achieving the city’s goal of net-zero carbon emissions by 2050, therefore, will almost certainly require a new level of investment in decarbonizing CUNY and other city agencies that are falling behind the emissions-reduction curve.

This report analyzes data on more than 1,600 city-owned buildings tracked by the New York City Department of Finance and published in its annual municipal government energy benchmarking reports. The analysis shows that while city government has made strides in reducing greenhouse gas emissions from city-owned buildings in recent years by investing in building retrofits, modernized heating and cooling systems, and energy efficiency upgrades, progress has been strikingly uneven.

The overall decline in emissions intensity of 9.6 percent since 2014 forges a feasible path to achieving the city's goal of reducing emissions from large buildings by up to 40 percent by 2030, compared to 2005.3 However, the challenge will only grow as the city continues to experience the effects of climate change, including an increase in the number of unusually hot and cold days that drive additional energy consumption.4 To achieve this ambitious goal, Mayor Adams and other city and state officials will have to prioritize capital funding for building systems upgrades and retrofits among those agencies where emissions intensity is increasing or falling behind the citywide average decrease—especially at CUNY, which oversees the largest group of city-owned buildings to register an overall emissions increase since 2014. At a time when New York City is still down nearly 250,000 jobs from its pre-pandemic peak, a major new public investment in building decarbonization efforts can help spark much-needed new jobs while making progress on the city's economic and sustainability goals.

Key findings of this analysis include:

Source: Center for an Urban Future analysis of municipal government energy benchmarking data from the NYC Department of Finance.

Source: Center for an Urban Future analysis of municipal government energy benchmarking data from the NYC Department of Finance.5

Source: Center for an Urban Future analysis of municipal government energy benchmarking data from the NYC Department of Finance.

1 For this data brief, CUF analyzed municipal building carbon emissions data from the NYC Energy Benchmarking Report: https://www1.nyc.gov/site/finance/taxes/property-reports/nyc-energy-benchmarking-report.page. Because energy usage dropped precipitously in 2020 due to the pandemic—as municipal buildings shuttered and schools shifted to remote learning—we focused on data from 2014–2019 for our analysis.

2 Emissions intensity benchmarking reported in this data was not fully standardized across agencies. As a result, some agencies only have data available for a limited portfolio of their buildings. As such, this data analysis should be considered a snapshot of progress rather than a comprehensive analysis of every city-owned building.

5 Only agencies with five or more tracked buildings included.

This report is a publication of the Center for an Urban Future (CUF). Researched and written by Charles Shaviro and Eli Dvorkin.

When it Comes to Reducing New York City Emissions, CUNY Flunks the Test

This report was made possible thanks to support from the Lily Auchincloss Foundation for ongoing research on the intersection of sustainability and New York’s economy.