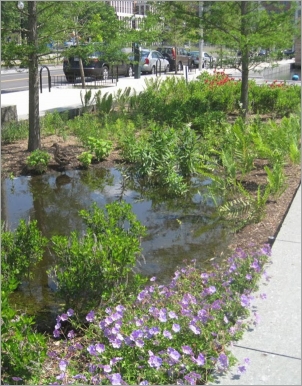 The devastating flooding caused by Hurricane Ida has brought renewed focus on the importance of building green infrastructure, which experts believe is critical to lessening the impact of rainstorms on the city's aging sewer system. New research by the Center for an Urban Future finds that while the de Blasio administration has made significant progress in constructing green infrastructure, it has still not met the city’s goals for 2015, has completed only a fifth of the green infrastructure projects started in post-2015 contingency plan areas, and has barely built any green infrastructure assets in the Bronx, Staten Island, and Manhattan.

The city is still yet to verify its first milestone – the 2015 goal for green infrastructure to reduce combined sewer overflows by just 2.4 percent of the citywide baseline, or 507 million gallons per year.1 After missing that first five-year target laid out in the city’s 2010 Green Infrastructure Plan—due in part to Hurricane Sandy—the de Blasio administration developed a Contingency Plan in early 2016, designed to reach its 2015 target by 2020. The administration has been aggressive in trying to catch up; when complete, the projects it launched beginning in 2016 will nearly triple the amount of green infrastructure assets throughout the city. But our research shows that even this important push is mostly still a work in progress: just 21 percent of the 7,346 new assets launched after 2016 have been completed; 79 percent remain under construction.2

Mayor-elect Adams will need to do a lot more. With climate change leading to more frequent and severe rainstorms that overwhelm New York’s century-old sewer system, the city must expand its goals for green infrastructure development and increase the pace at which construction occurs.

With Hurricane Ida revealing that neighborhoods all over the city are at risk of flooding from increasingly powerful storms, significantly more progress is needed in all boroughs. 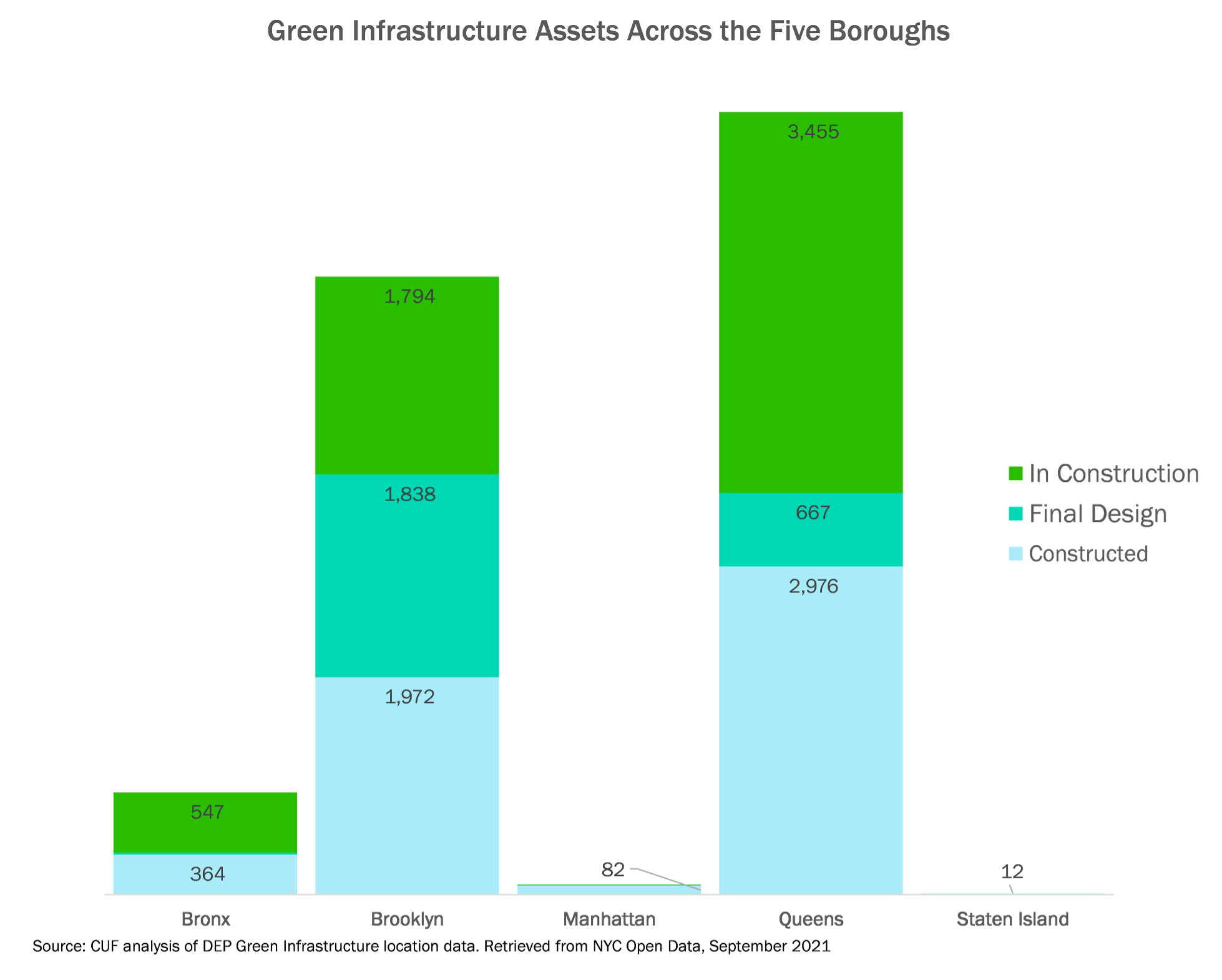 This data brief examines New York City’s progress on constructing new green infrastructure—including curbside rain gardens; green roofs; and permeable surfaces on paths, roads, and play surfaces at parks, schools, NYCHA campuses, and other city-owned property throughout the city. The construction of green infrastructure assets has the potential to capture and divert billions of gallons of stormwater runoff away from the city’s century-old sewer system, where just one-tenth of an inch of rainfall can cause “Combined Sewer Overflows” (CSOs)—the discharge of stormwater mixed with untreated sewage directly into local waterways.3

Lessening the burden of rainfall on the city’s combined sewers is critical in normal times because nearly every time it rains the system becomes overwhelmed, ultimately discharging over 20 billion gallons of raw sewage mixed with stormwater into New York City’s waterways every year.4 Now, with climate change causing more frequent and severe rainstorms, green infrastructure must play an increasing role in mitigating flooding, too.

The city’s green infrastructure plan is a key component of how the city plans to reduce CSOs, as required by a Consent Order between NYC DEP and the New York State Department of Environmental Conservation (DEC). But as heavy rainstorms increase in frequency, at minimum, the city’s rollout of green infrastructure should keep pace, and our research confirms that NYC DEP is falling behind state-mandated targets.

Key findings of our data brief include:

There are over 78,000 acres of impervious area in the parts of New York City that use the combined sewer system. The goal of NYC’s 2010 Green Infrastructure Plan was to use green infrastructure to capture the first inch of rainfall on 10 percent of that area by 2030, reducing combined sewer overflows by a total of 1.67 billion gallons per year. But the city has already missed the first two five-year milestones: 1.5 percent by 2015, and 4 percent by 2020.

For New York to not only meet the state-ordered 1.67-billion-gallon CSO reduction within the next 9 years, but also take steps to mitigate increased flooding due to climate change, the city will have to redouble its efforts and deploy green infrastructure in every neighborhood throughout New York City.

Scale up the original Green Infrastructure Plan, set new goals, and develop a strategy to get there more quickly. The city’s first Green Infrastructure Plan was established by the Bloomberg Administration in 2010, long before Hurricane Sandy and Hurricane Ida. As storms become more frequent and severe due to climate change, the city must reevaluate its approach. The city should make green infrastructure a central part of mitigating flooding and keeping New Yorkers safe. It should set new goals to reduce sewer overflows by billions more gallons per year and develop a plan to meet those goals on time.

Prioritize fixing the capital construction process for green infrastructure. Just 21 percent of the green infrastructure assets that have gone into construction since 2016 are fully built. The city cannot afford to take several years to build rain gardens and bioswales if it is to meet its fast-approaching 2030 goal. The next mayor should build on DDC capital reforms and push all agencies involved in building green infrastructure—from DEP and DOT to EDC, OMB, DOE, and the Parks Department—to follow through with the bold reforms needed to reduce project delays. Nearly all the recommendations in our Stretching New York City’s Capital Dollars report apply equally to green infrastructure.

Greatly expand and accelerate the rollout of Right-of-Way (ROW) green infrastructure in all five boroughs. Though public roads and sidewalks make up 30 percent of the city’s impervious area, the vast majority of the city’s roadways—including nearly all of Manhattan and Staten Island—have no rain gardens, catch basins, or permeable surfaces to capture stormwater. The city should accelerate plans for area-wide green infrastructure contracts beyond the priority neighborhoods in Brooklyn and Queens that have been the focus for the past decade, with new attention to areas with combined sewers but little to no planned green infrastructure, such as Manhattan, Southwest Brooklyn, and the South Bronx.

Fast-track Cloudburst Projects Hurricane Ida and other devastating rainstorms this year show the city must act now to manage stormwater from extreme rain events, also known as “cloudbursts,” which are increasing in frequency and severity due to climate change. DEP should explore all options for managing flash flooding, including using streets, parks, and other public spaces. The city should prioritize cloudburst projects in the areas most affected by Hurricane Ida and move quickly beyond feasibility studies to begin the rollout of neighborhood-scale solutions to divert floodwaters and keep communities safe.

Green Infrastructure assets across NYC that are built (green), under construction (yellow), or in final design (blue). 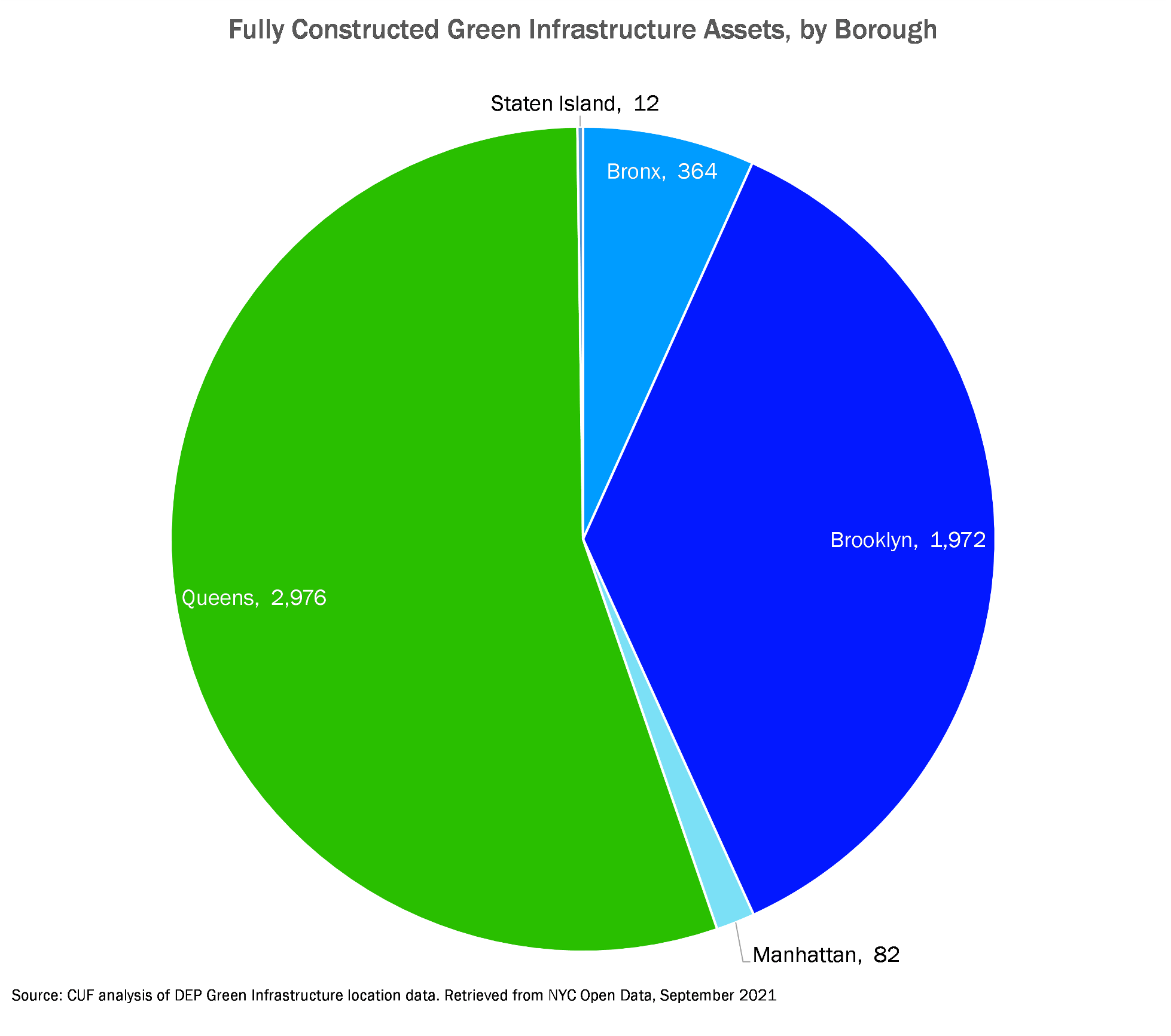 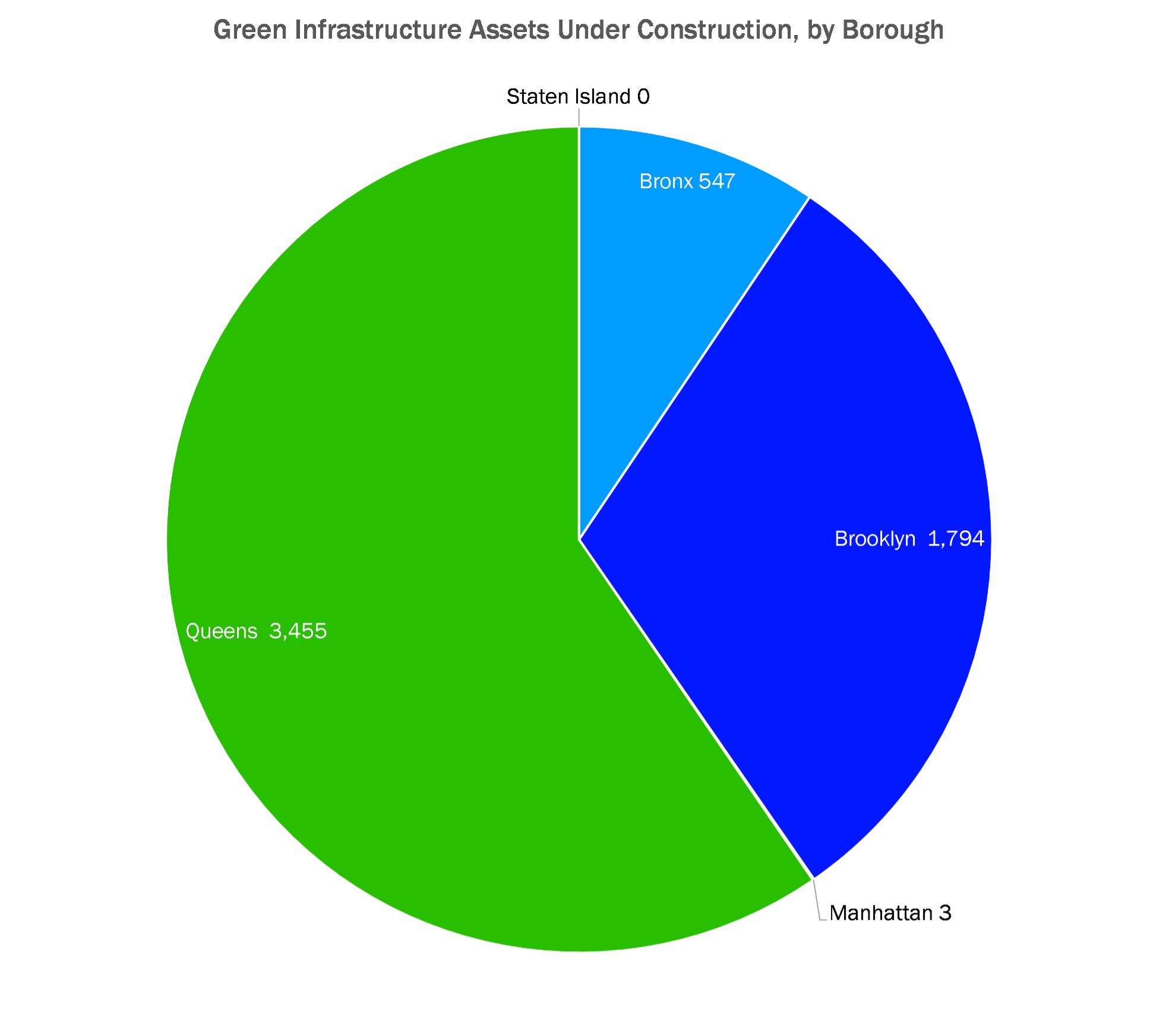 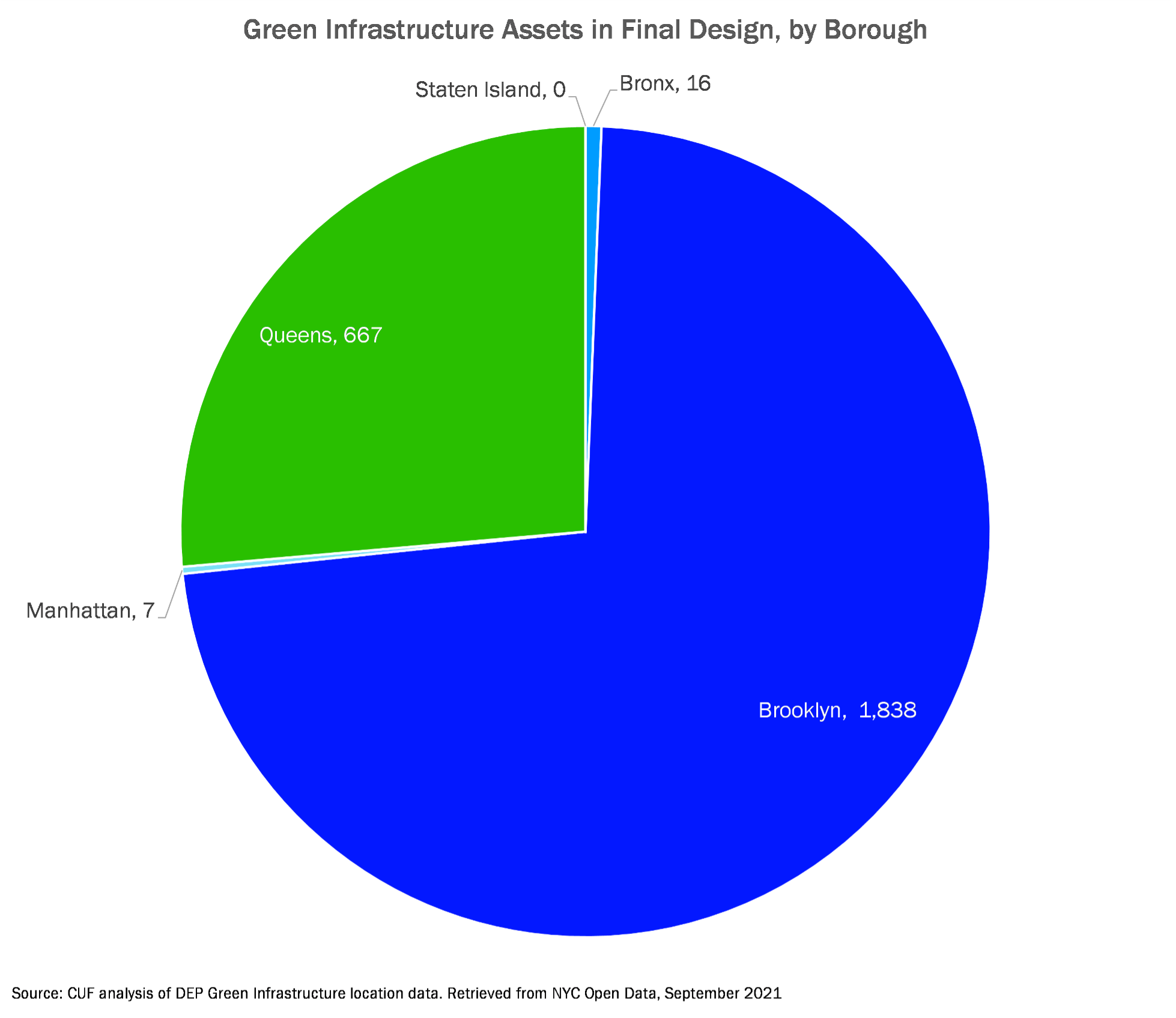 This report is a publication of the Center for an Urban Future (CUF). Researched and written by Laird Gallagher.

How New York City Plans to Soak Up the Rain

How New York City Plans to Soak Up the Rain
Bloomberg

How New York City Plans to Soak Up the Rain
Bloomberg