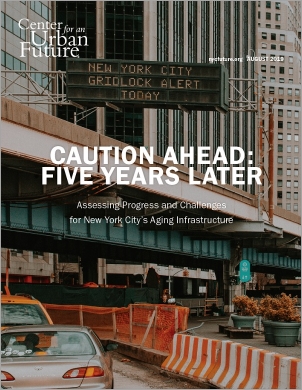 In this five-year update to our landmark report on New York City’s aging infrastructure, we find that the city has made record-level capital investments, but results have been mixed. Increased usage and new stresses from climate change make bringing the city's core infrastructure to a state of good repair all the more essential.

In the last six weeks alone, flash flooding shut down streets in Park Slope and Williamsburg, a software glitch brought subway trains to a halt during rush hour, a massive power outage left tens of thousands of city residents in the dark, and a Long Island City subway station was deluged with so much water that it knocked a straphanger off his feet. Though hardly at the same scale of infrastructure woes New York City experienced in New York in the 1980s—when the city closed the Williamsburg Bridge for fear of collapse, and track fires were a regular occurrence in the subway system—the recent wave of breakdowns is a troubling reminder of what can happen in a city where a large segment of the core infrastructure is decades old and overdue for basic upgrades.

In March 2014, the Center for an Urban Future documented an array of challenges and vulnerabilities resulting from the city’s aging infrastructure. Our report, titled Caution Ahead, revealed that many of the city’s roads, bridges, subway signals, water and sewer mains, and public buildings were more than 50 years old and in varying states of disrepair. And it identified a minimum investment of $47.3 billion over the next five years to bring the city’s core infrastructure to a state of good repair.

The events of the past month make it clear that the city’s aging assets still present a massive infrastructure challenge. If anything, the need has only been magnified as a result of unprecedented usage from a growing population and record tourism, and new stresses brought on by climate change.

This study provides a five-year update to our assessment of New York City’s aging infrastructure vulnerabilities. It concludes that the de Blasio administration’s record infrastructure investments have resulted in real progress in several areas, but also finds that capital needs across many city agencies have grown significantly—and not just in high-profile areas like the subways and NYCHA. Our new analysis shows that some of the problems we documented five years ago have only gotten worse, and that the new stressors like climate change have only added to the overall price tag to bring the city’s core infrastructure to a state of good repair.

Increased capital investment—particularly in water and sewer infrastructure and street resurfacing—is beginning to show results. Our analysis finds that the following areas have shown signs of improvement since 2014:

But in other areas, conditions have gotten worse as needs have grown:

There are also areas of city infrastructure that are seeing improvement, but which still face enormous challenges:

The pages that follow go into significantly more detail about the city’s current infrastructure needs. Throughout our analysis, we find that the decisions made by Mayor de Blasio and the City Council to significantly increase the city’s capital investments are paying off and putting the city’s core infrastructure on stronger footing. But it is also evident that current investment levels will need to be sustained, not only to make up for decades of underinvestment but also to keep pace with increasing usage and new stresses.  Doing so will be essential to keeping New York City a global leader into the twenty-first century. 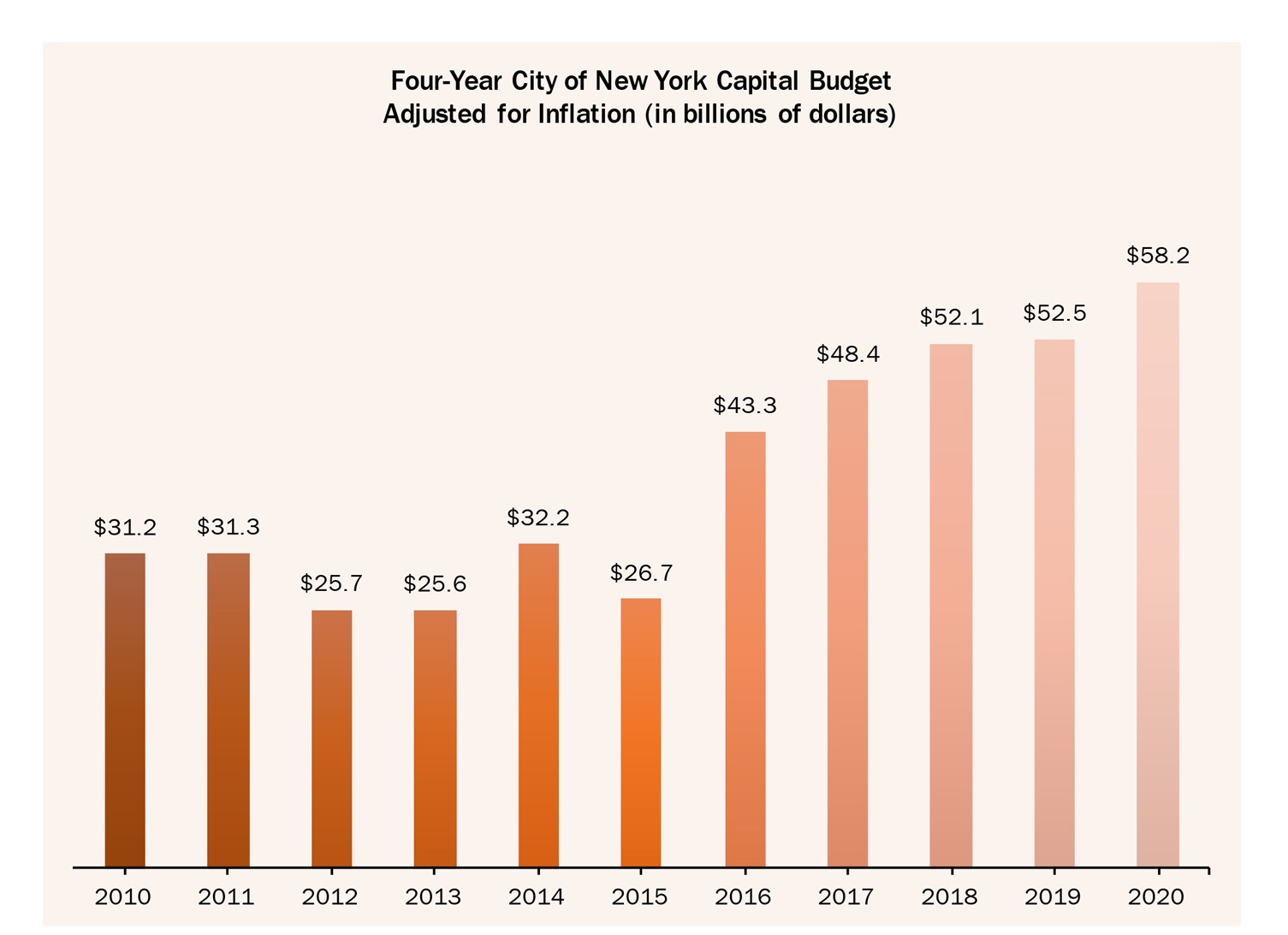 New York City’s streets, roads, and highways serve far more than cars. They allow buses, bicyclists, and pedestrians to get around the city, and enable the transport of goods and the activity of first responders, all while protecting vulnerable underground infrastructure and guiding rainwater to catch basins. Yet over the past two decades, city streets have experienced significant deterioration. However, some progress has been made since 2014. 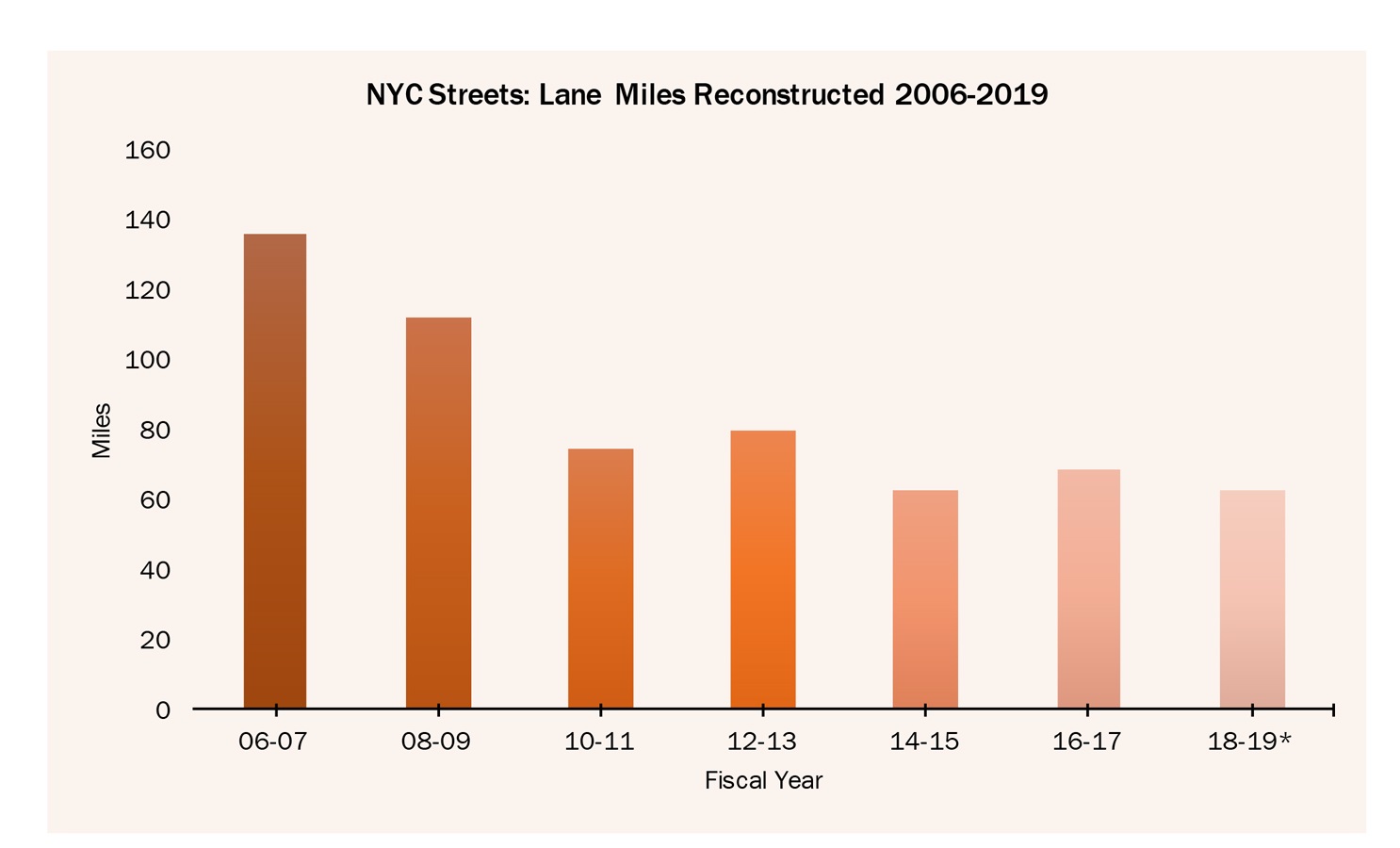 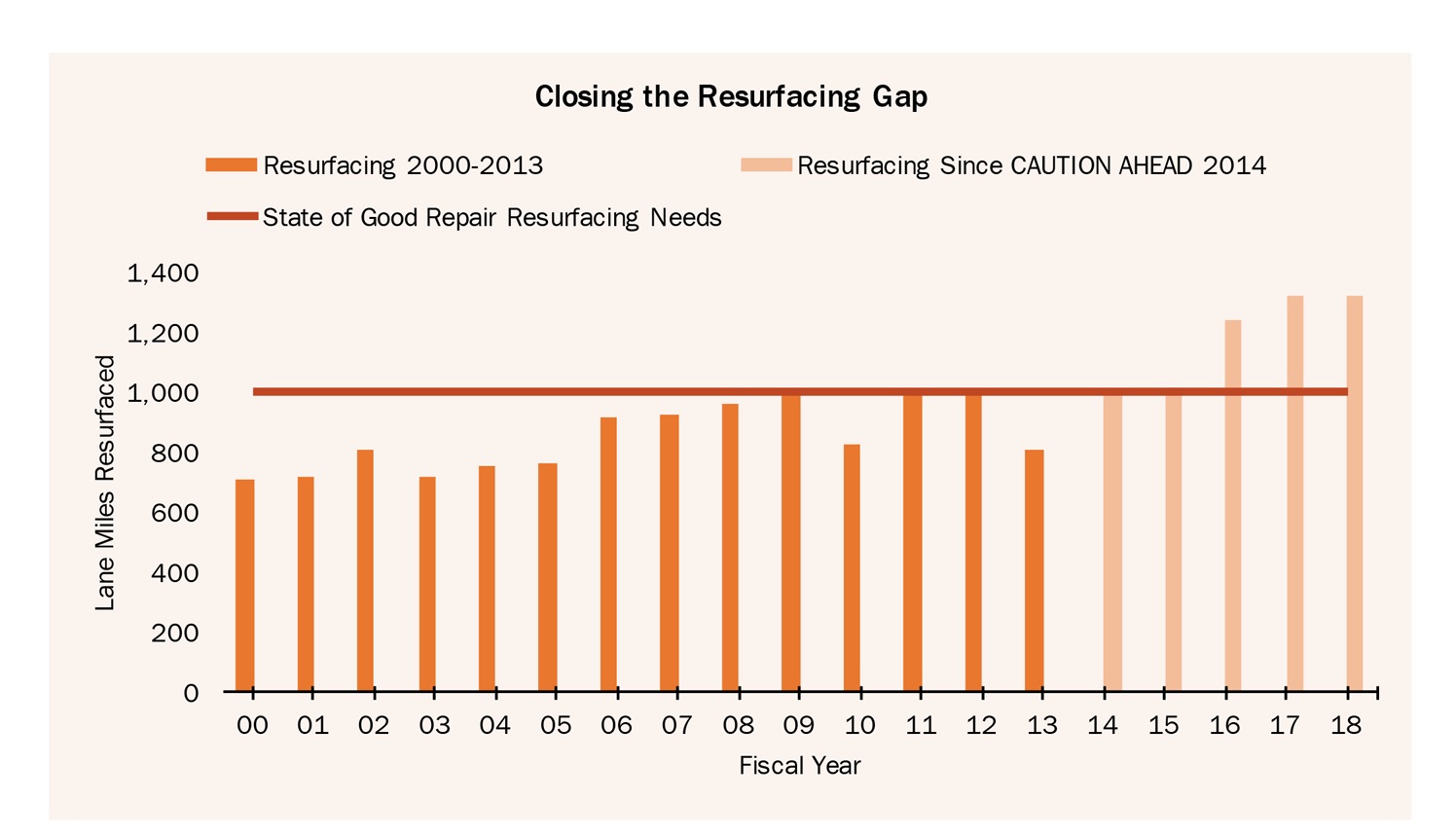 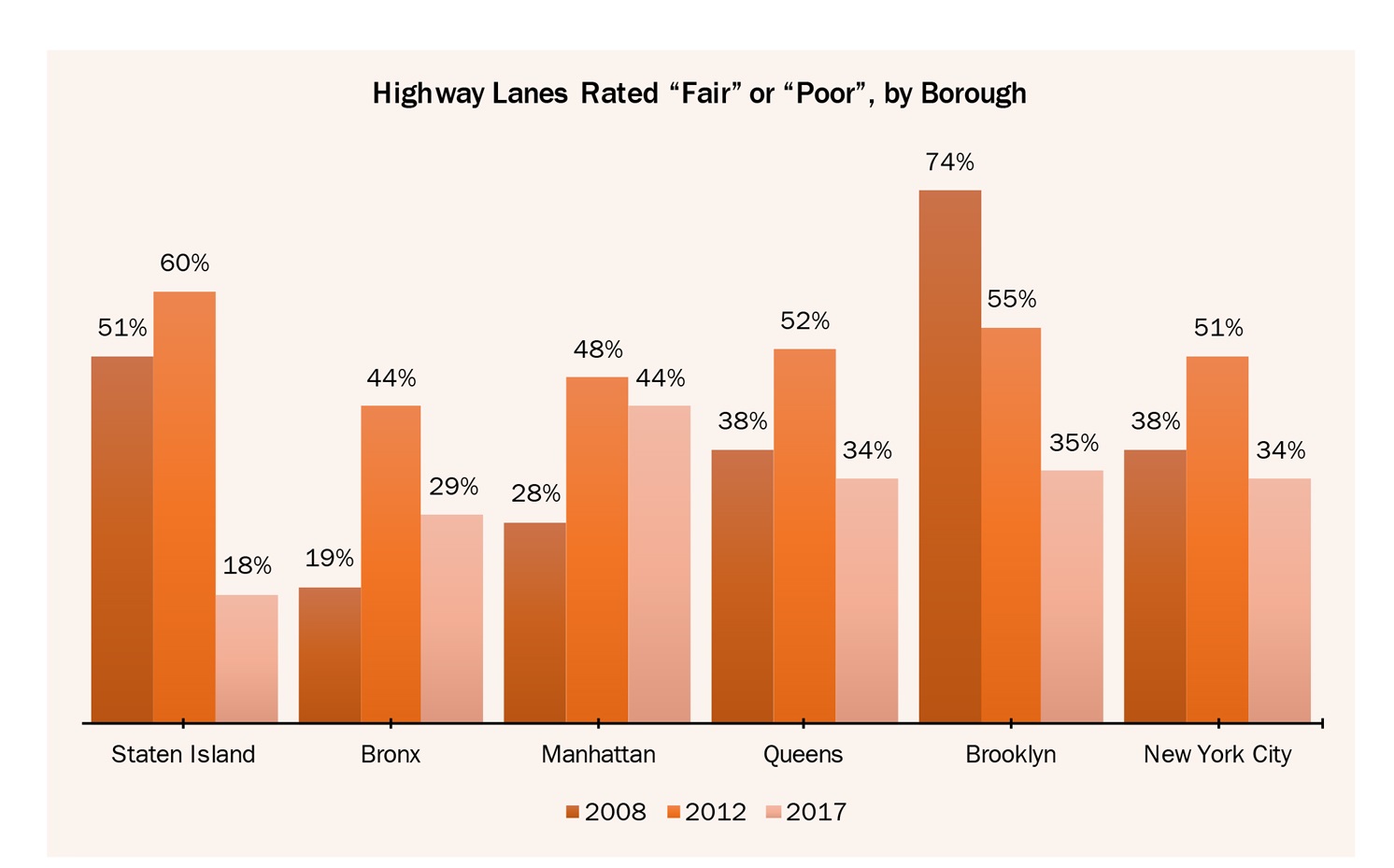 New York City is an archipelago crisscrossed by rivers, creeks, canals, and estuaries, train tracks, highways, parks, and roads. The city’s 1,444 bridges are essential to how the city functions, connecting transportation routes, neighborhoods, and boroughs. But they’re also aging rapidly, and many are now used in ways for which they were never designed. 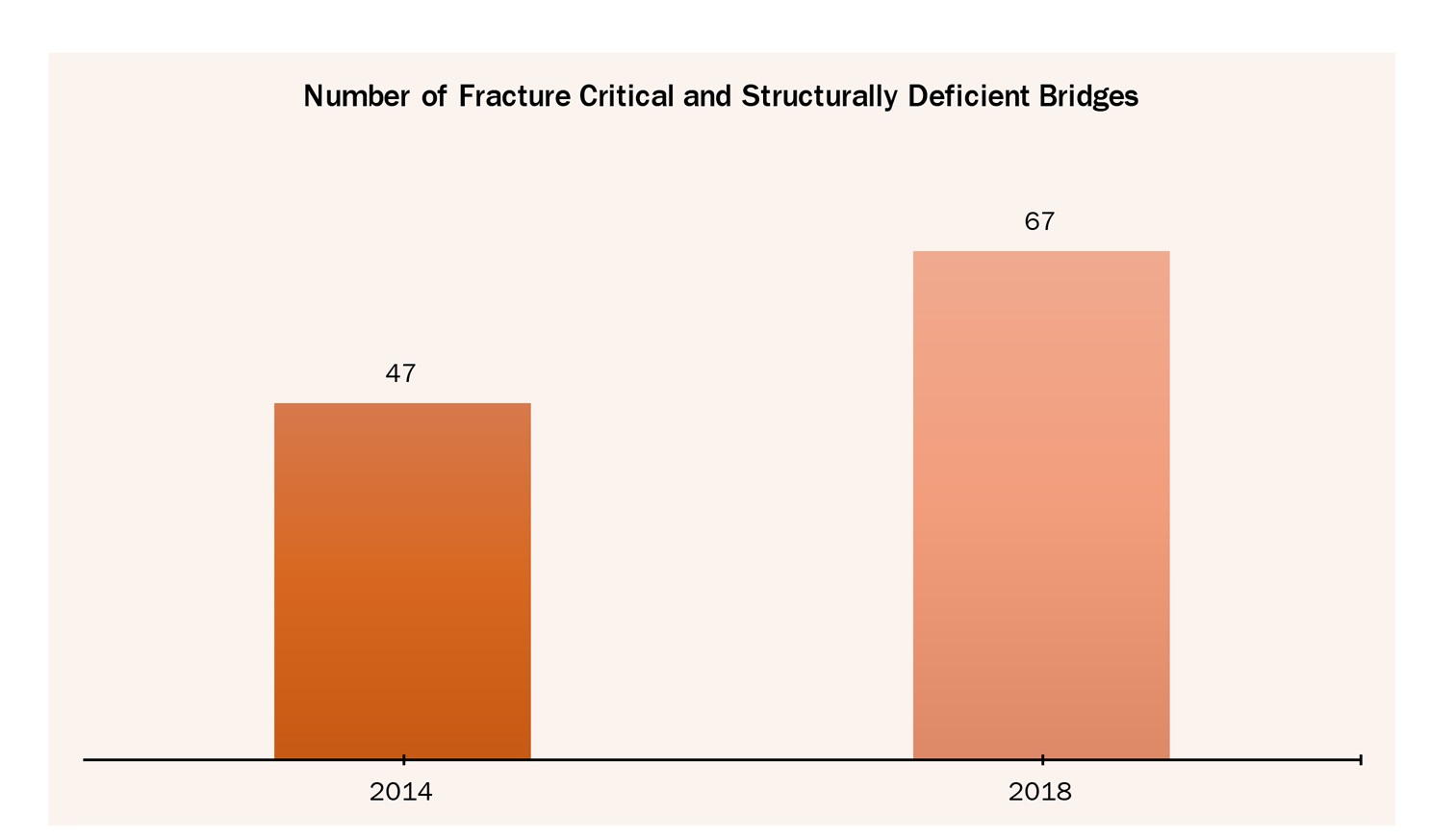 Source: Save Our Bridges data on Structurally Deficient and Fracture Critical Bridges, http://saveourbridges.com/, accessed May 17, 2019 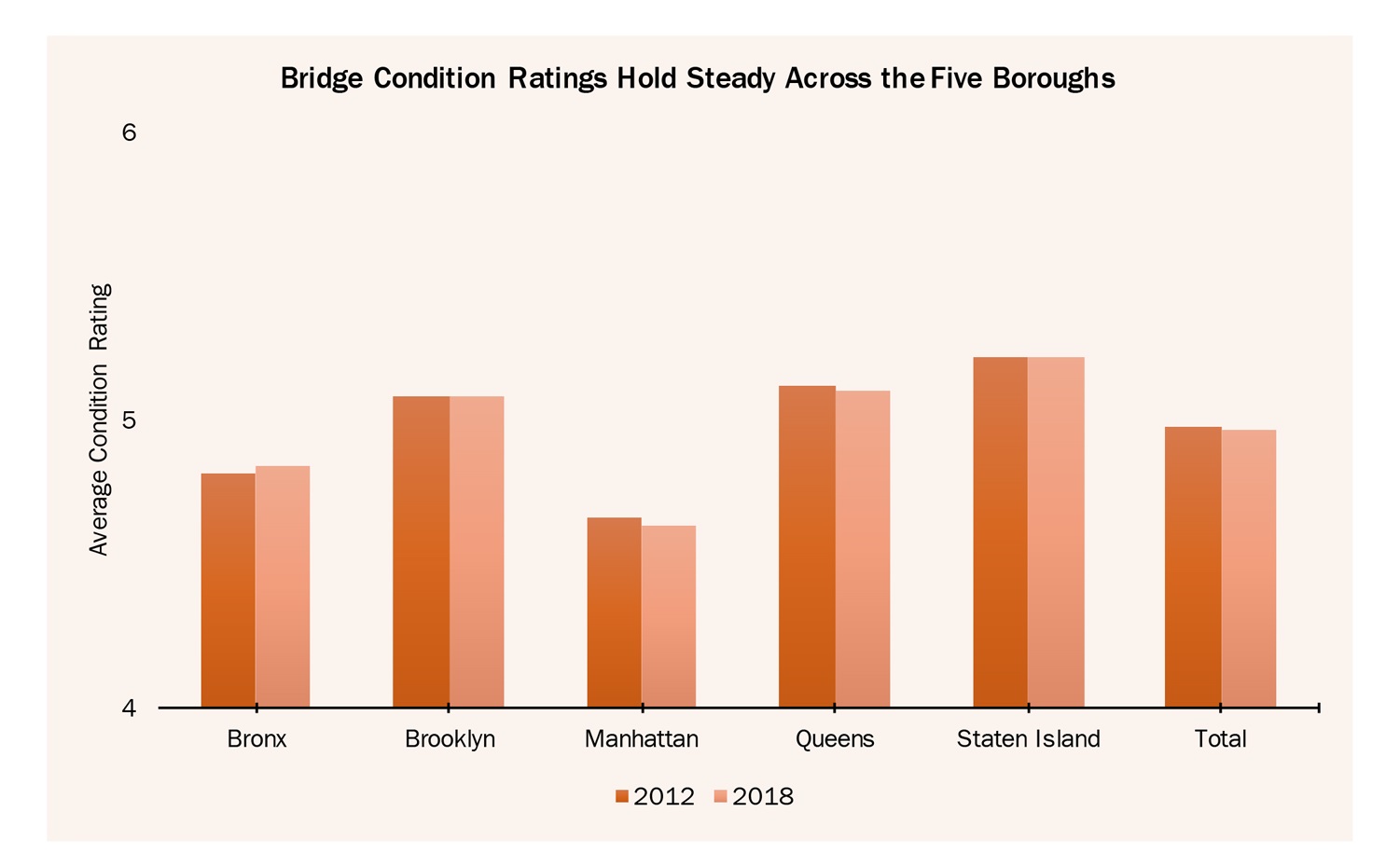 In keeping with the policy recommendations in our 2014 Caution Ahead report, the de Blasio administration’s Underground Infrastructure Working Group recommended prioritizing water and sewer utility infrastructure, and those new priorities have started to yield results.16 The New York City Department of Environmental Protection (DEP) operates, manages, and maintains a massive water system that extends 125 miles north and west of the city and has a storage capacity of over half a trillion gallons. In this update, CUF focuses on the maintenance of the approximately 7,000 miles of municipal water mains and pipes.17 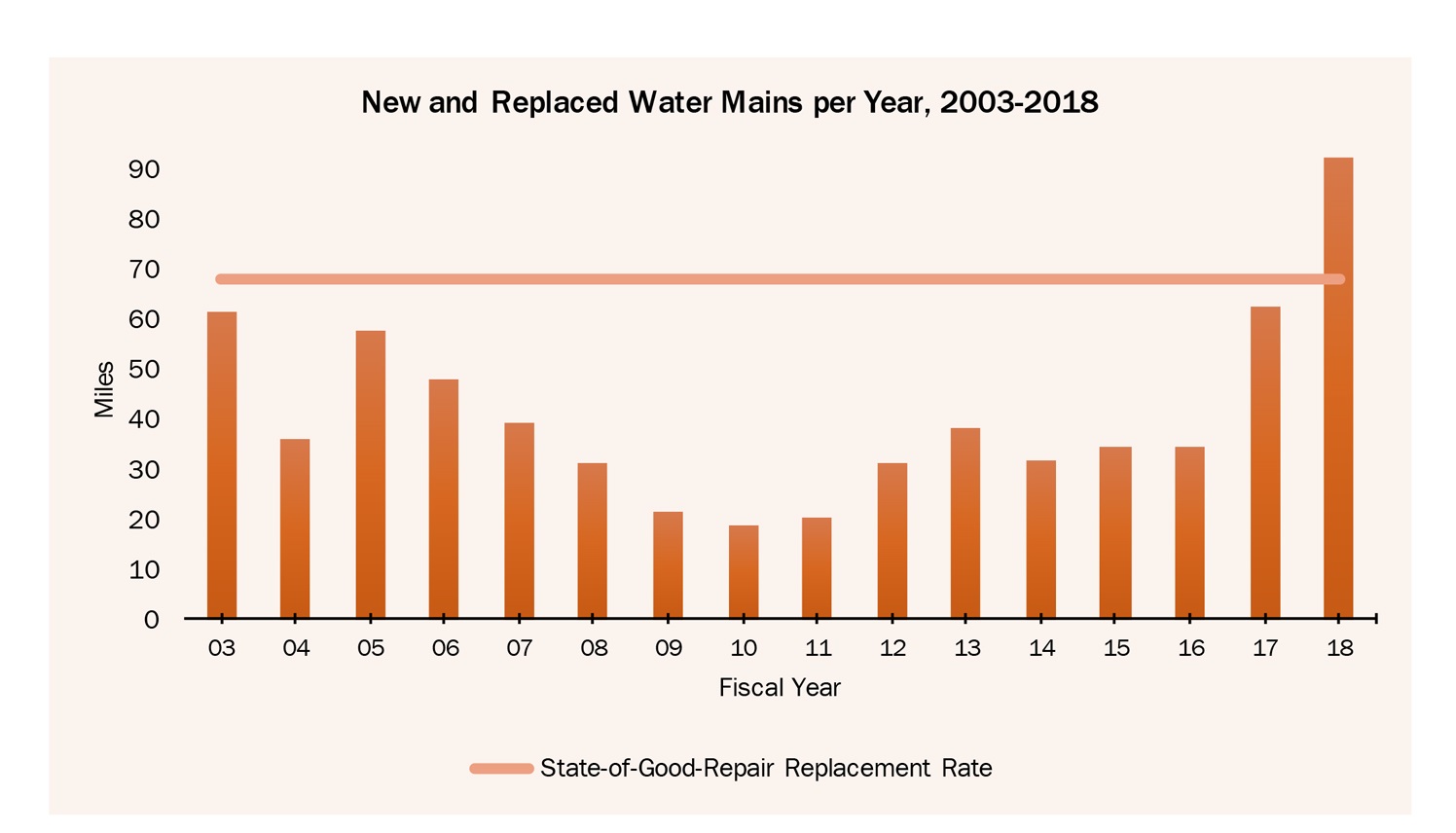 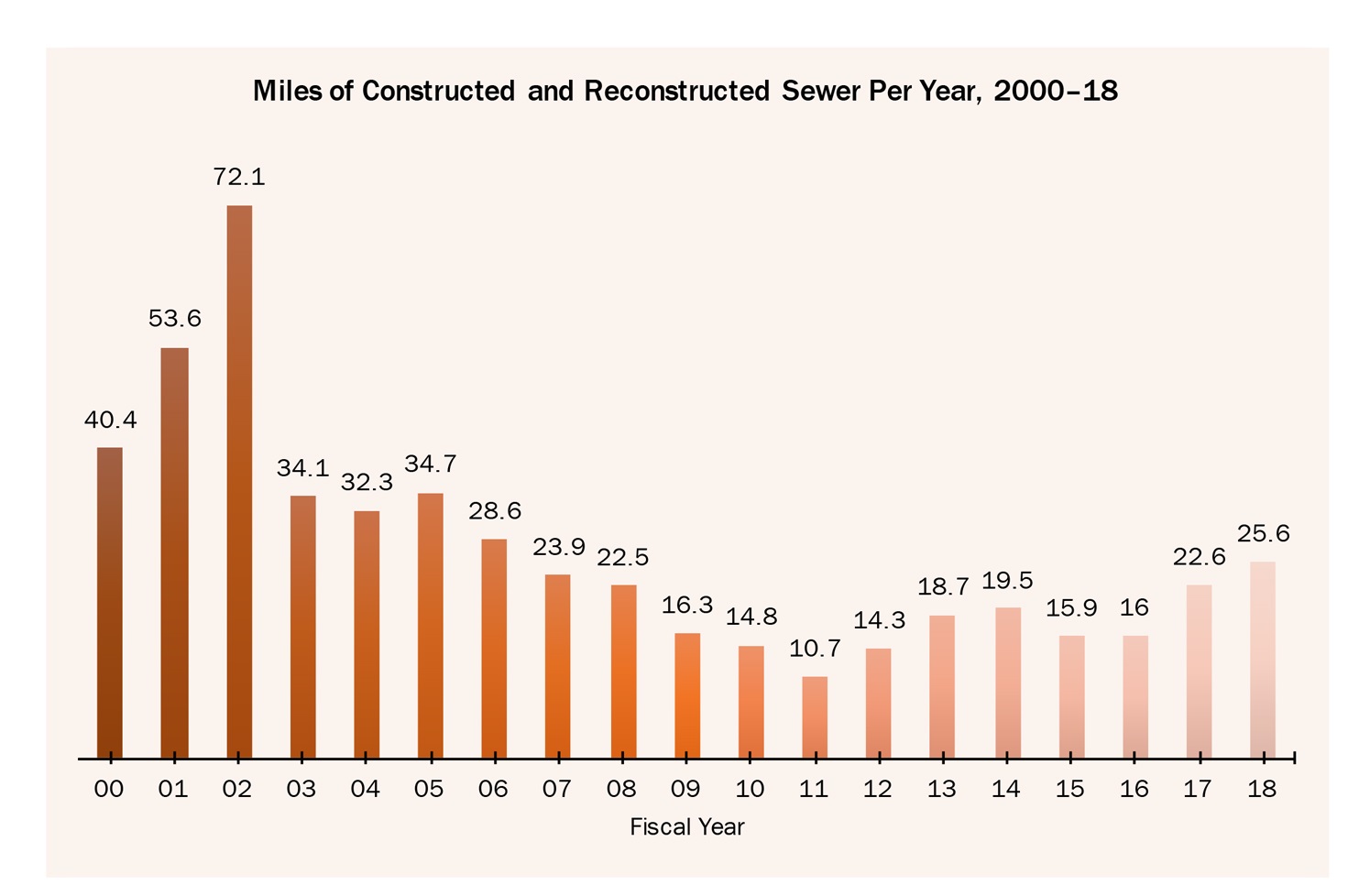 In the first Caution Ahead report, CUF examined the overall state of good repair needs of the city agencies which report those needs to the Mayor’s Office of Management and Budget (OMB) as part of the Asset Information Management System (AIMS) report. As in the 2014 report, we focus on the library systems and CUNY separately. Here, we review and update the costs of bringing the eighteen  city agencies’ aging infrastructure to a state-of-good-repair, meaning the cost for existing agency assets to be repaired, replaced, or rehabilitated so that they are fully functioning.25 Since 2014, those costs have risen dramatically. The good news is that allocated funding has risen as well, though significant gaps remain. 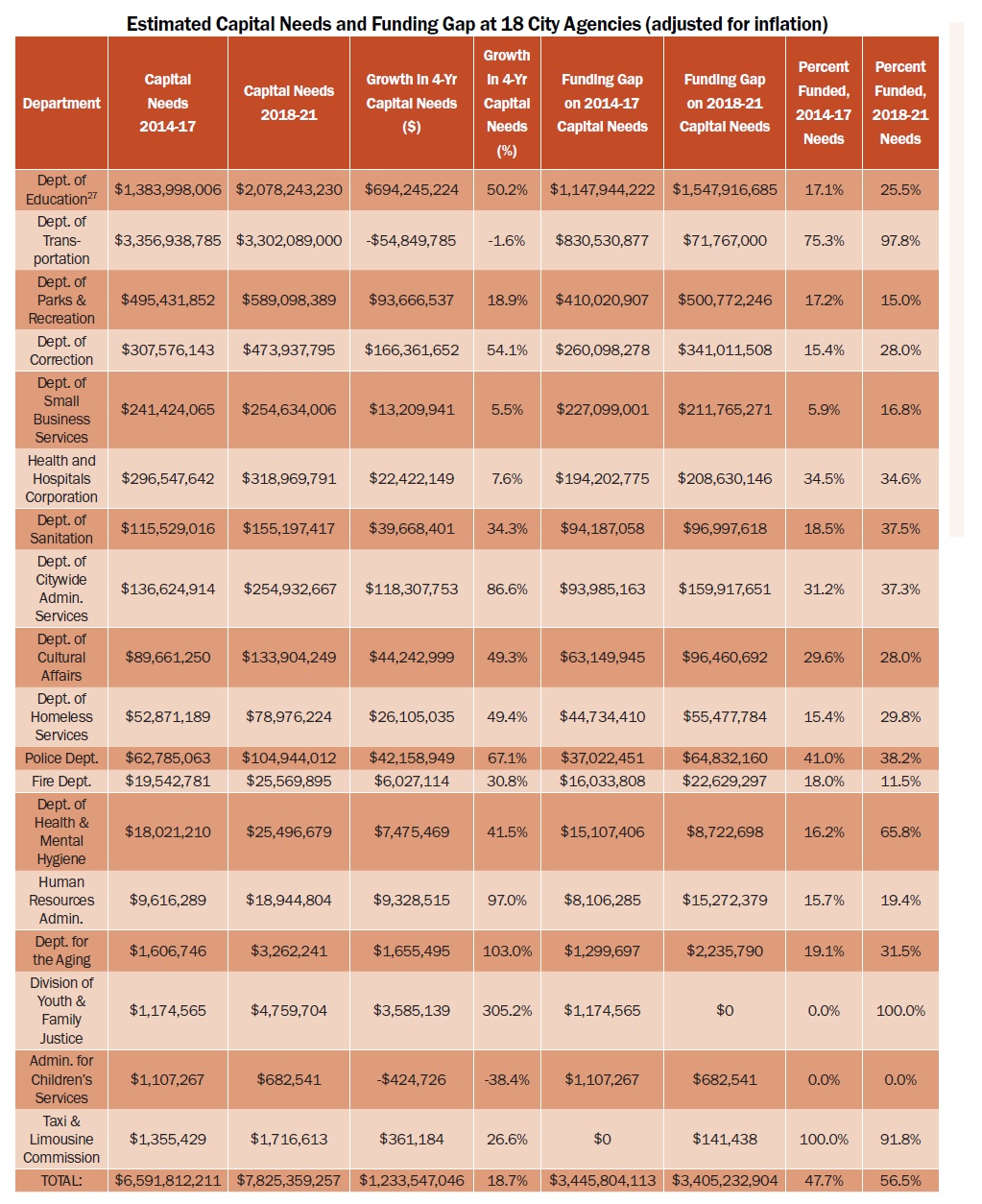 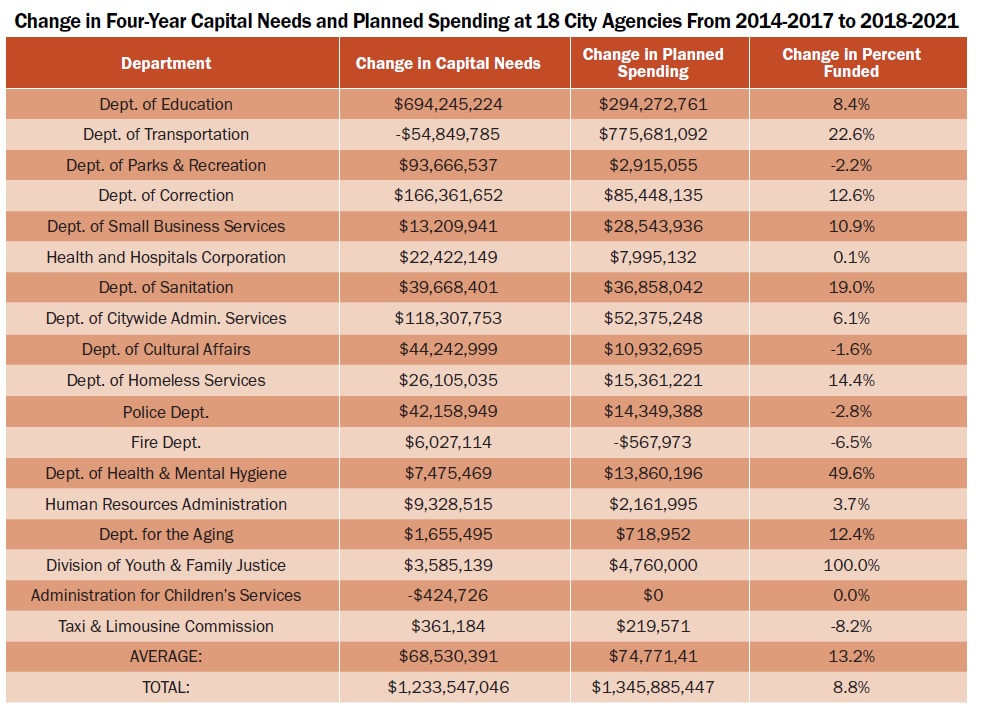 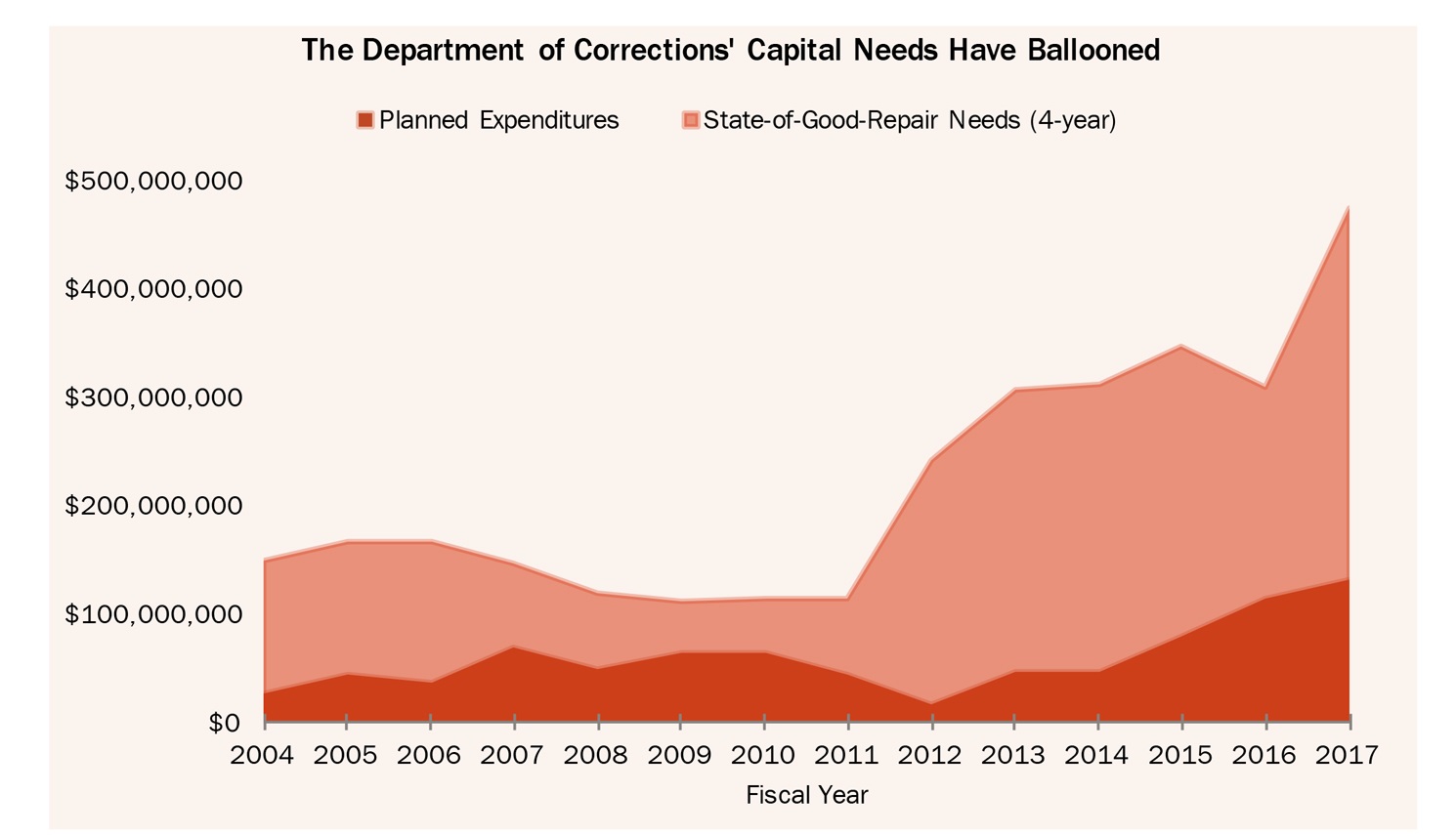 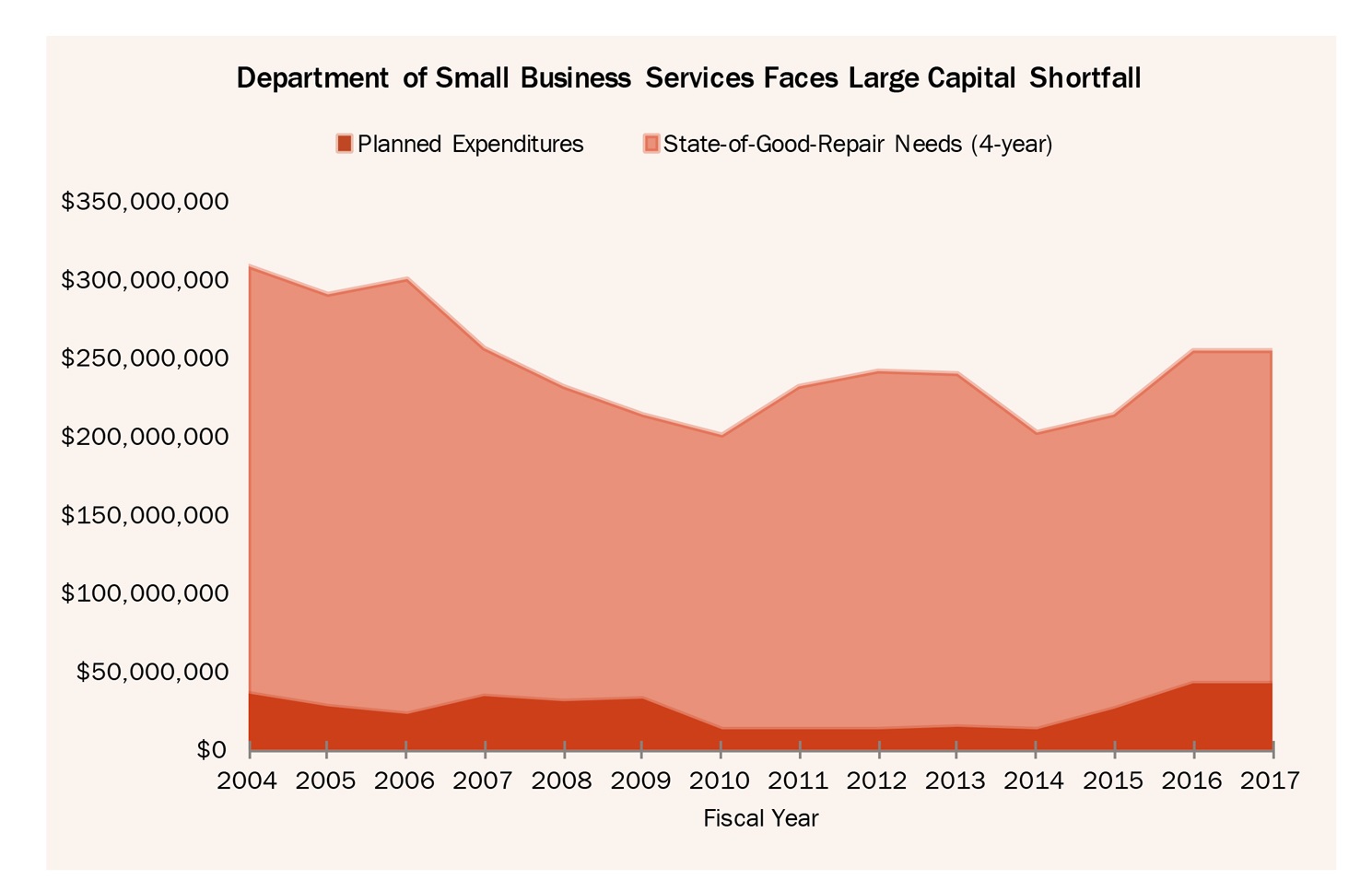 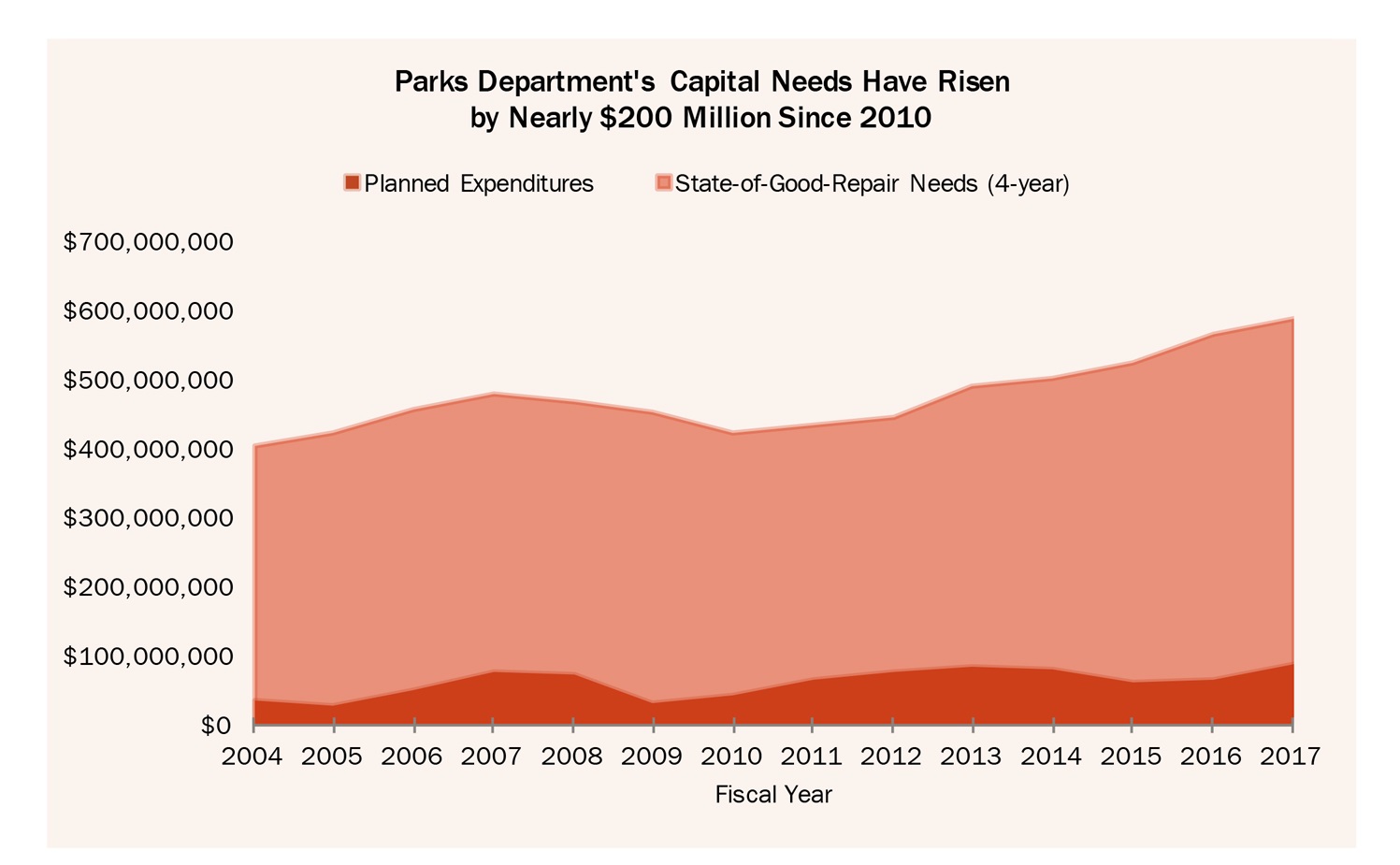 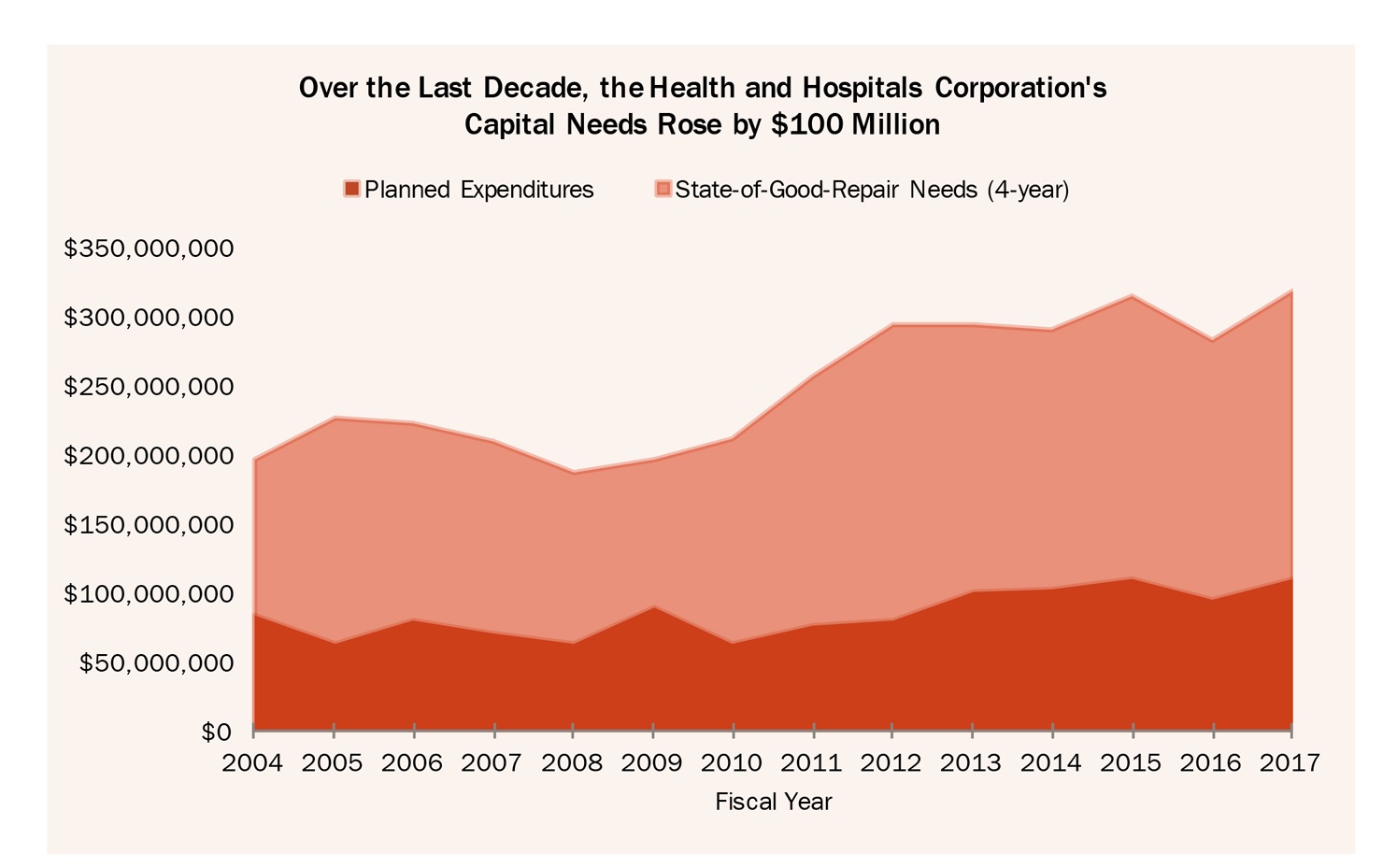 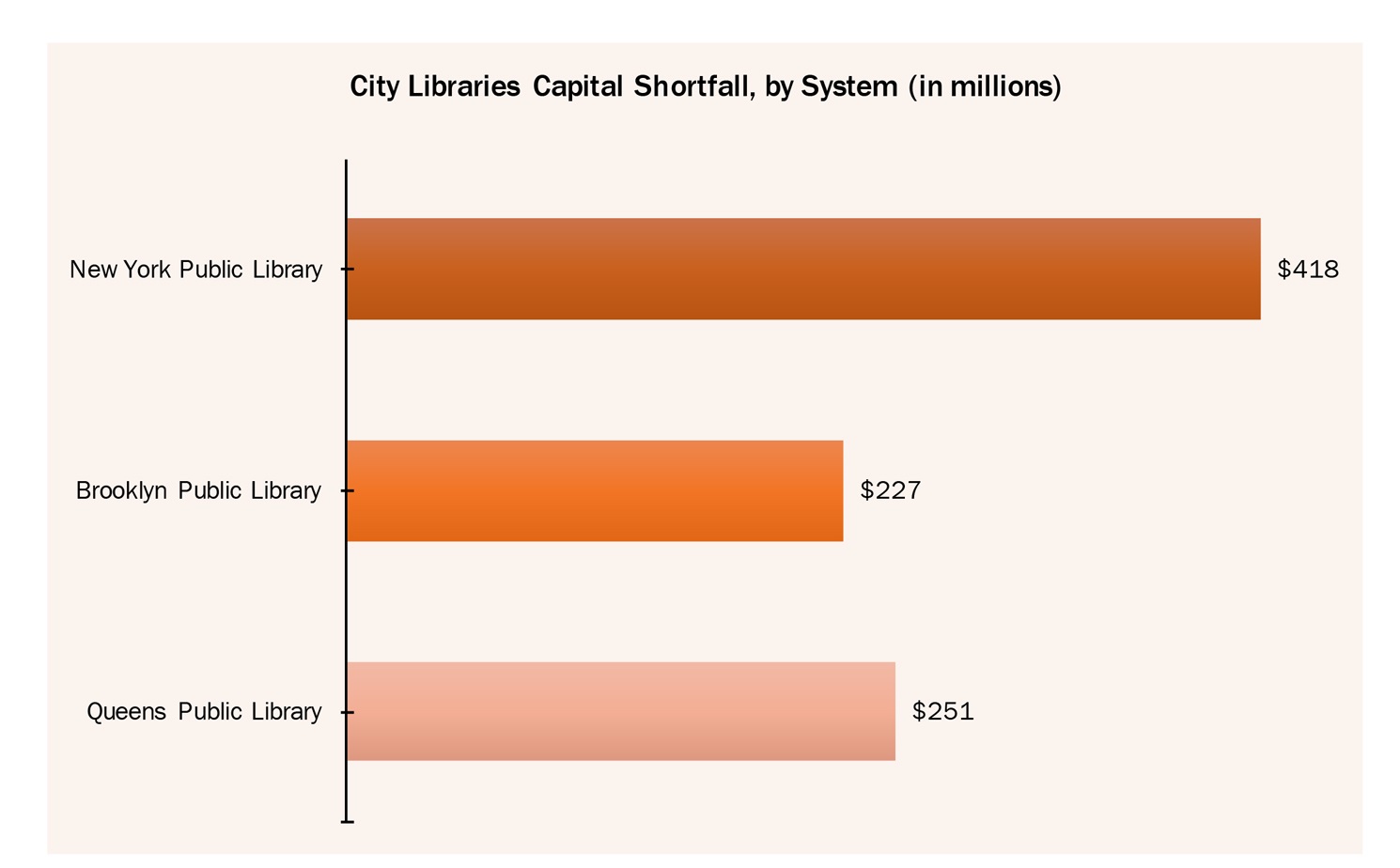 When CUF last assessed the capital needs of the city’s three library systems, in June 2018, our analysis showed a total of at least $947 million just to bring their 216 branches and four research centers up to a state of good repair.28 Since then, new funding from the mayor, City Council, and borough presidents has helped the systems chip away at this enormous figure. But in the most recent assessment from 2019, published by The City, the remaining ten-year capital needs still total $896 million.29 That’s on top of emergency capital needs of more than $430 million.30

New York City’s school system is the largest in the country, serving over 1.1 million students.34 Since 2011, the NYC Department of Education (DOE)’s state-of-good-repair needs have more than doubled. But while needs are rising, funding has grown with it—from 2014 to 2016, the city funded 100 percent of the DOE’s four-year state-of-good-repair capital needs; in 2017’s updated estimate, 94 percent of these needs were funded.
However, those percentages may not capture the full picture. To better understand the DOE’s work to meet its exploding repair needs, we analyzed the planned activities tracked individually in the AIMS report. Looking solely at those activities and not including capital upgrades and modernizations, we found that since 2011, activities to address line-item state-of-good-repair needs have met an average of just 24 percent of the total required for a state of good repair. In 2017, though the DOE faced nearly $2.1 billion in state of good repair needs, the department’s planned activities addressed only 26 percent ($530 million) of those needs, leaving a funding gap of over $1.5 billion. 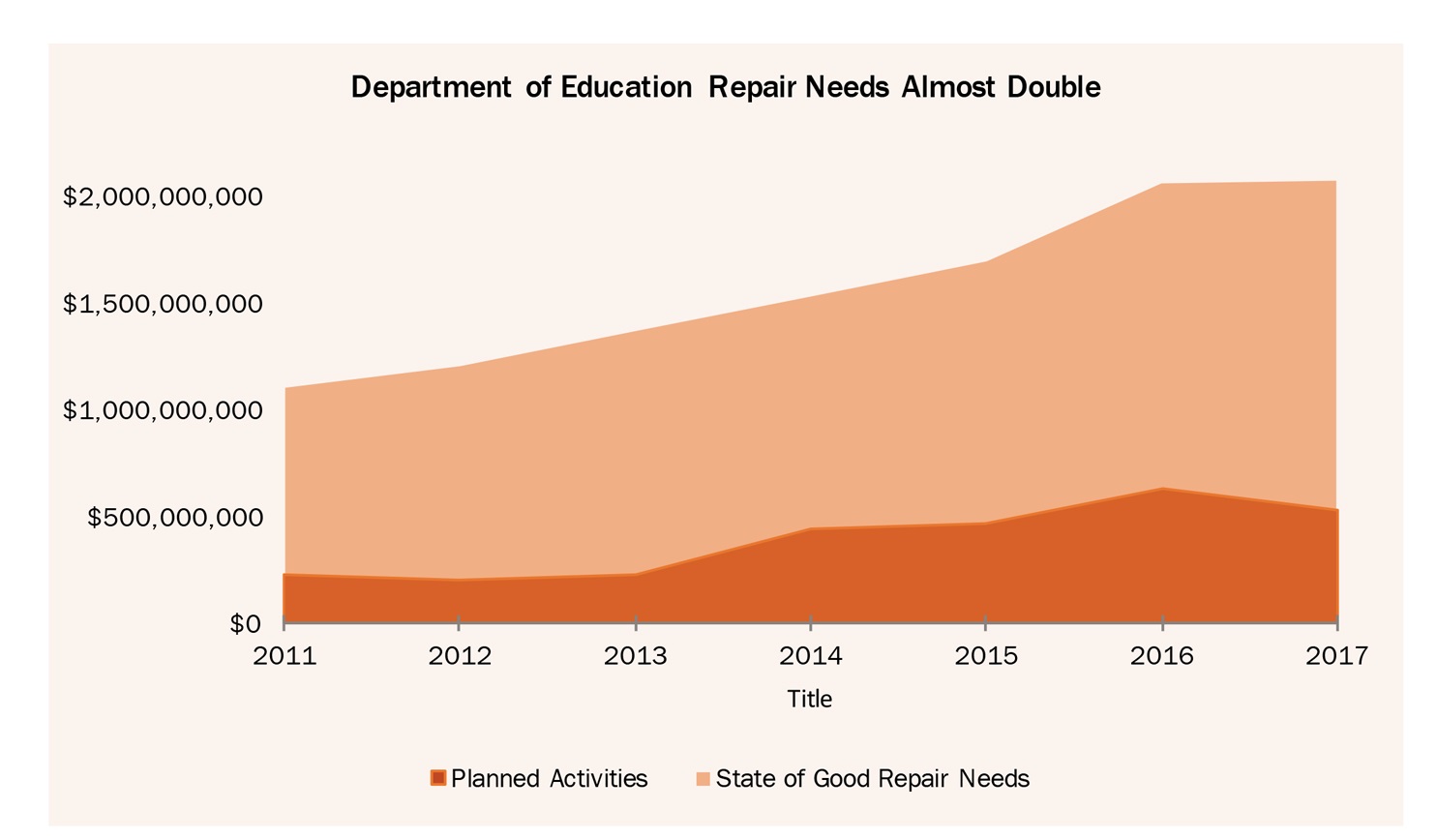 In 2007, CUNY commissioned a comprehensive audit of its aging infrastructure, finding a $1.7 billion backlog of much-needed repairs; in 2012, a follow-up study was performed, finding that that number had risen to $2.5 billion.
Although no system-wide study of CUNY’s infrastructure has been published since 2012, CUF has analyzed the state-of-good-repair capital needs that are reported to the Office of Management and Budget (OMB) through the AIMS report in order to gauge the relative state of disrepair across the system. Our analysis shows: 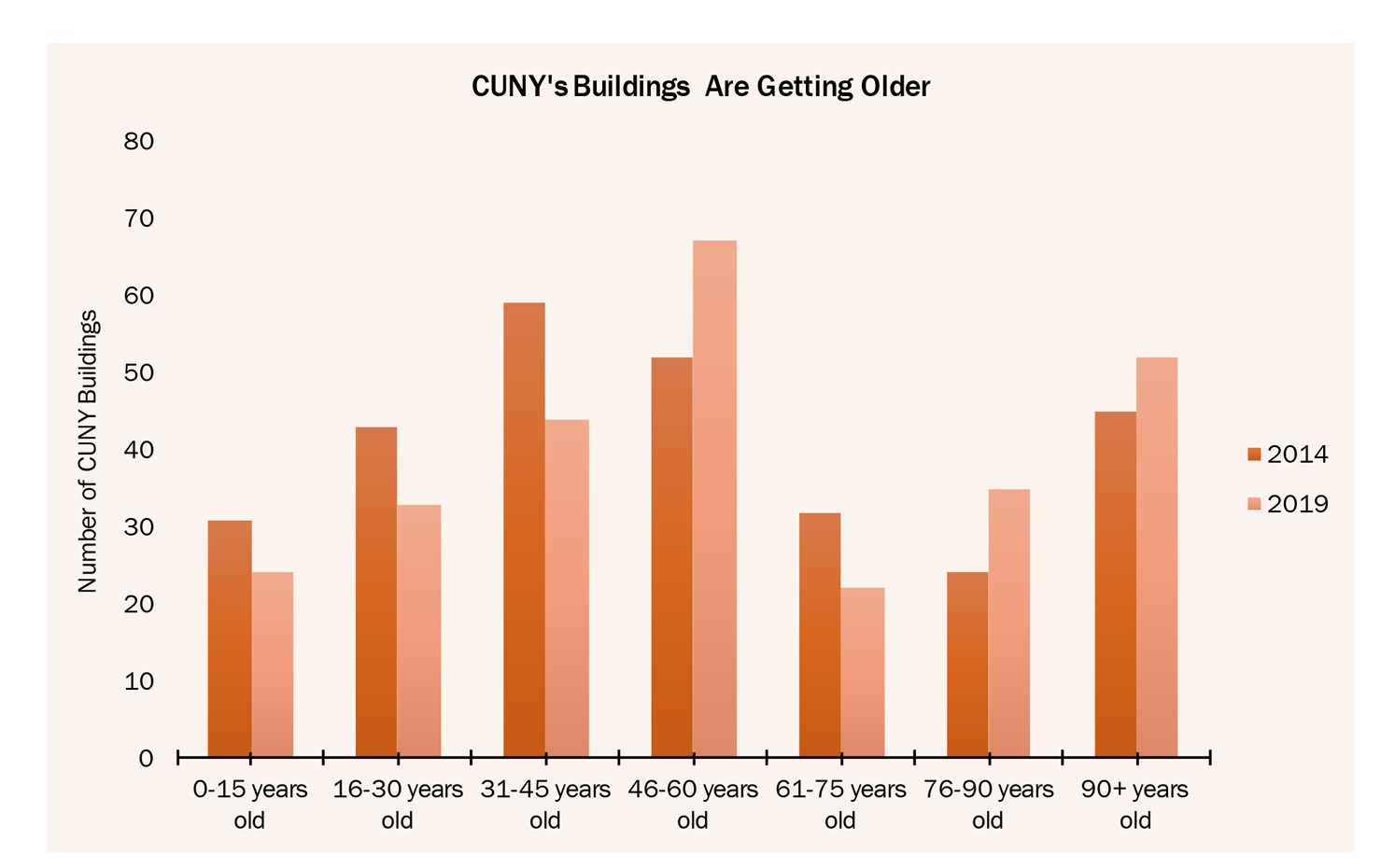 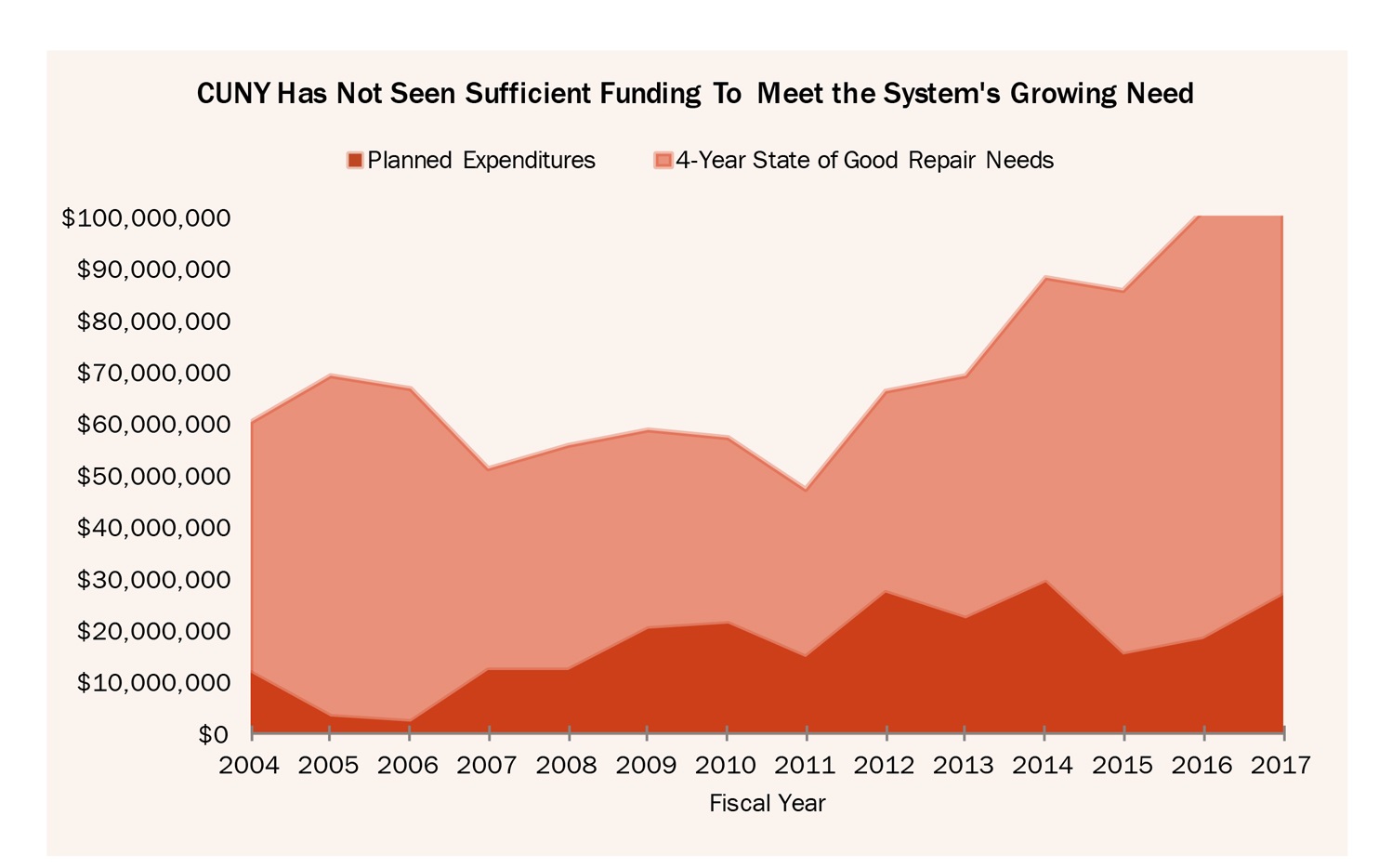 In this 2019 update to Caution Ahead, CUF has added an examination of the data behind select key sustainability efforts as outlined in the mayor’s OneNYC plan. New York City has set an ambitious target of reducing greenhouse gas emissions by 80 percent by 2050. According to its own estimates, the city is making impressive progress, with citywide annual emissions in 2017 down 17 percent from the 2005 baseline, even as gross city product has increased almost 24 percent and population has grown by 7.6 percent over the same time period.38 But maintaining this pace will require major investment in retrofitting existing buildings to improve efficiency, among other measures. And meeting other targets will require even more ramping up. Work to improve water management, reduce waste to landfills, and protect New York City’s immense coastline encompass major infrastructure challenges. Below, we’ve taken a closer look at a few areas connected with city-owned infrastructure in order to assess progress to date.

Since taking office, the de Blasio administration has built on the city’s NYC Green Infrastructure Plan by significantly ramping up the construction of green infrastructure, like curbside rain gardens, green roofs, and permeable surfaces in parks and playgrounds, which help to capture stormwater runoff and reduce sewer overflows into waterbodies around the five boroughs. With over 4,000 new assets built or under construction since 2014, the city has recorded remarkable progress.
However, even with this rapid rollout, the city is still struggling to meet the targets set in a 2012 agreement with New York State, which lays out a construction roadmap and sets five-year targets for overall stormwater capture, leading to a  goal of 1.67 billion gallons per year in combined sewer overflow reduction by 2030. The city came well under its 2015 target of 507 million gallons, and at the current rate will struggle to meet that amount by the end of 2020, our analysis shows.39

However, the targets have not been met. Even with the significant construction of green infrastructure in past years—2350 assets in 2016 alone,— the city is still far below its inital 2015 target of 1.5 percent greened area (1181 acres), with only 0.6 percent (467 acres) implemented or under construction in 2017. 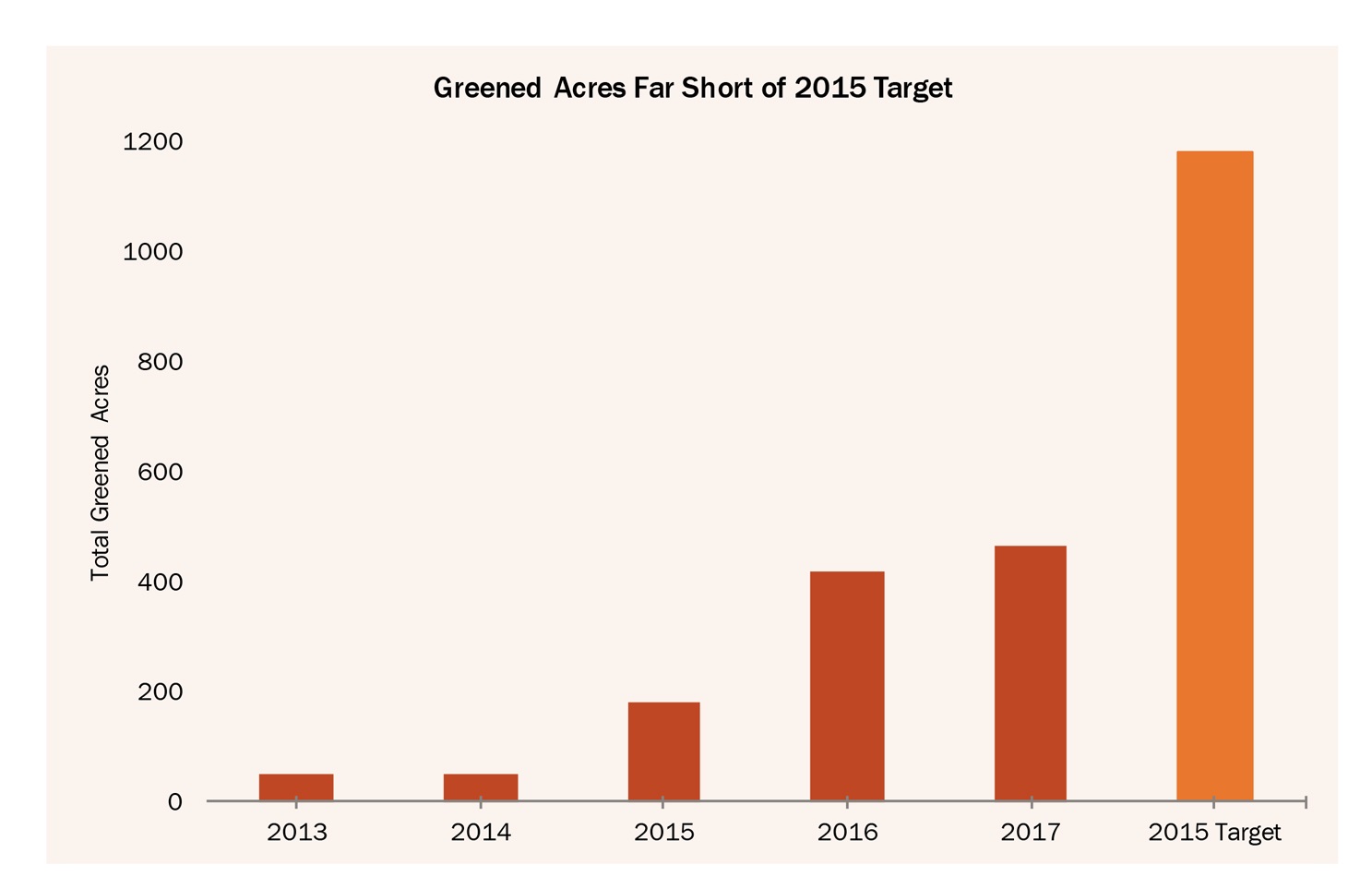 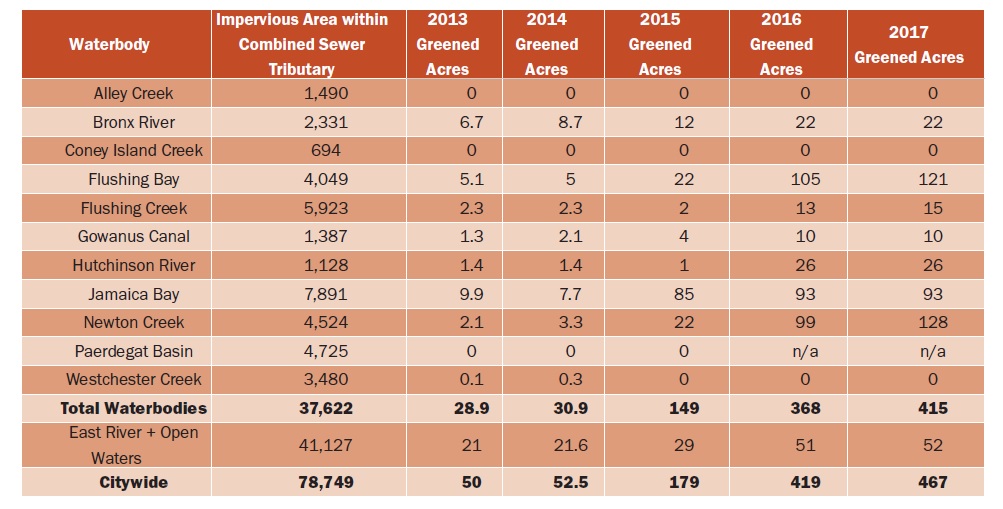 The city’s overall target of 80 percent reduction of greenhouse gas emissions by 2050 has garnered much attention in recent years. Efforts to reach that target are tracked in a community-scale inventory that encompasses both public and private activity.40 But city government also collects emissions data for over two-thousand city-owned and -leased buildings across the five boroughs, including libraries, schools, and public colleges and universities, in an effort to track and reduce emissions across the city’s municipal infrastructure. For this report, CUF analyzed New York City Government Building Energy Benchmarking Results to see how the carbon footprint of 1,943 municipal buildings, measured in kilograms of carbon dioxide emitted per square foot (kg CO2e/ft2), changed between 2014 and 2017. 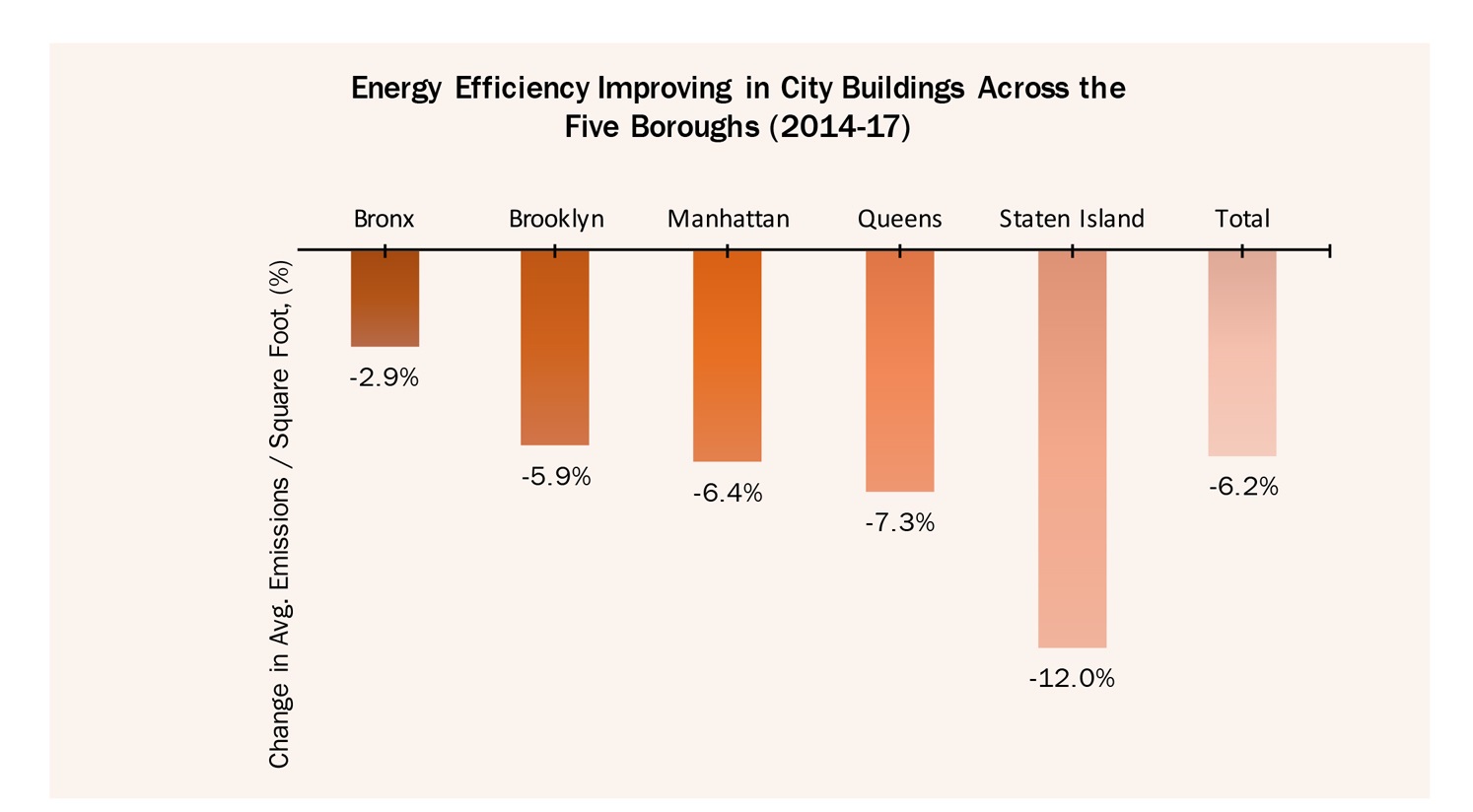 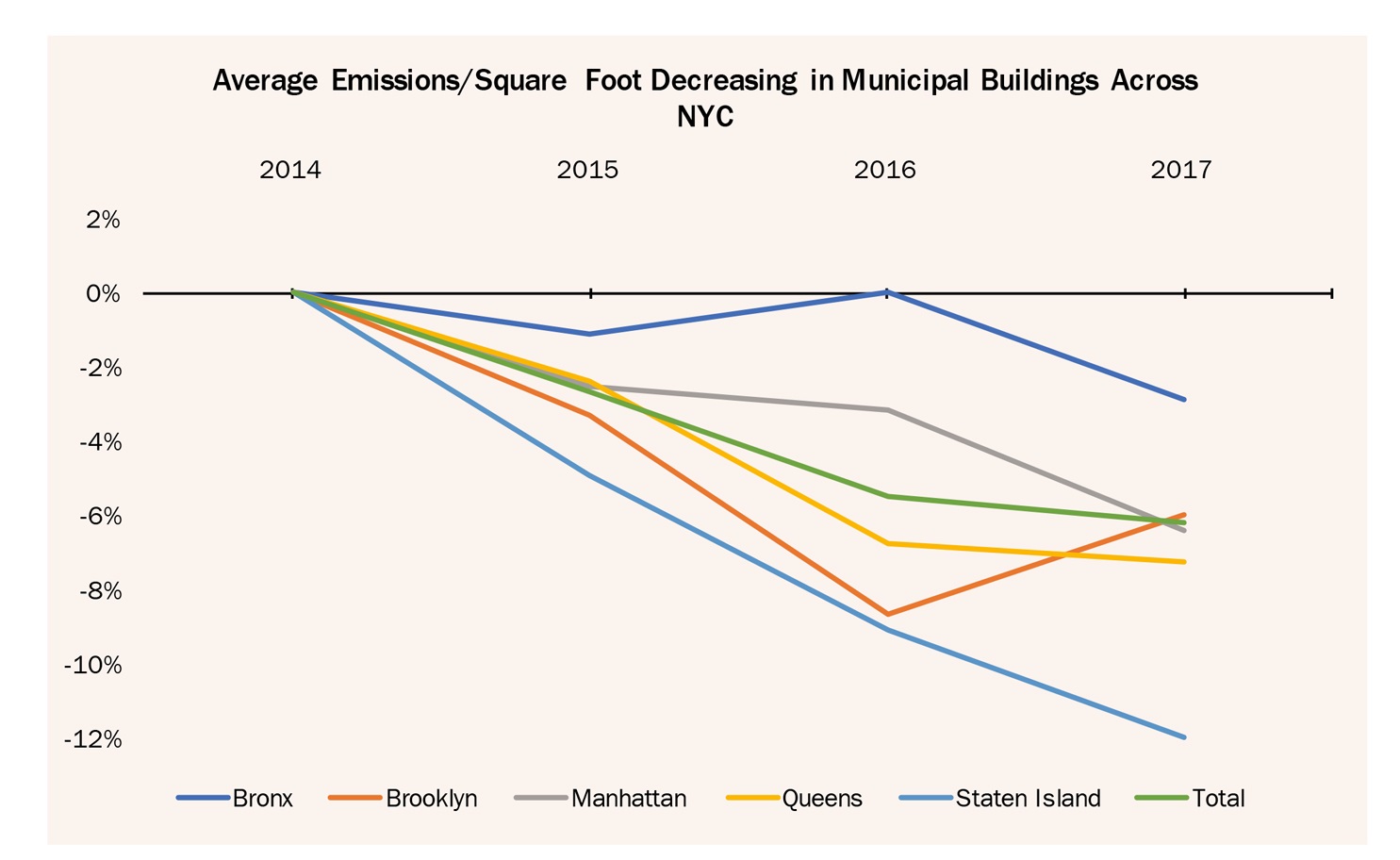 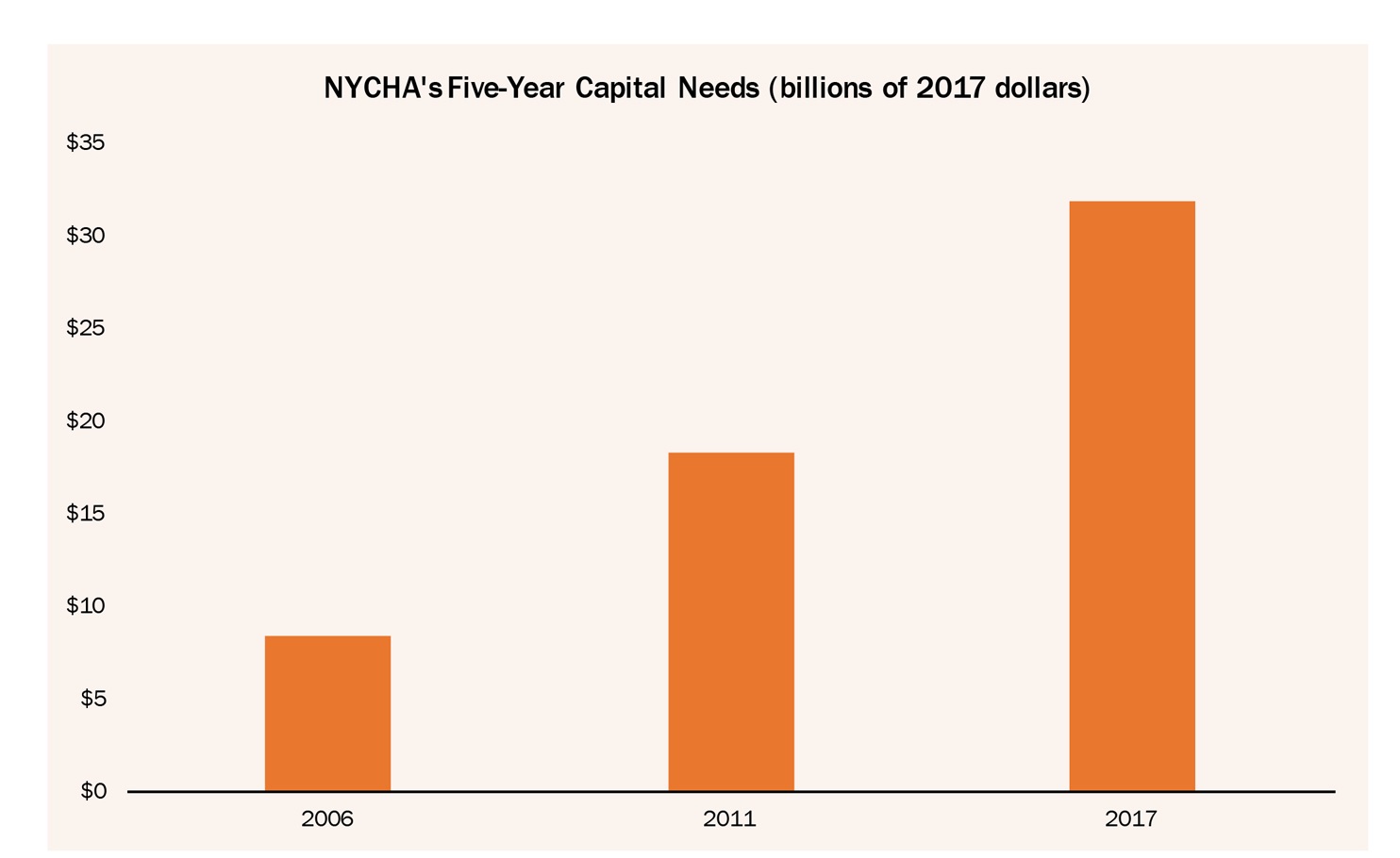 In the five years since CUF last took stock of the city’s transportation infrastructure, the subway system has been mired in a crisis brought on by years of chronic underinvestment. The crisis peaked with a train derailment in June 2017 which injured 34 people, after which Governor Cuomo declared a state of emergency for the New York subway system. This declaration was supposed to encourage the MTA to modernize the system and get it into a state of good repair. But the gap between funding and need is still immense, even as the system continues to experience frequent delays and other problems. The first five years of the Fast Forward Plan, released in May 2018, calls for an estimated $19 billion in new investment, which would come on top of preexisting NYC Transit capital needs of $16.3 billion for 2015–2019.49 We reviewed the most recently available full-scale needs assessment alongside the updated MTA capital budget in order to assess where planned spending is keeping pace or falling short. 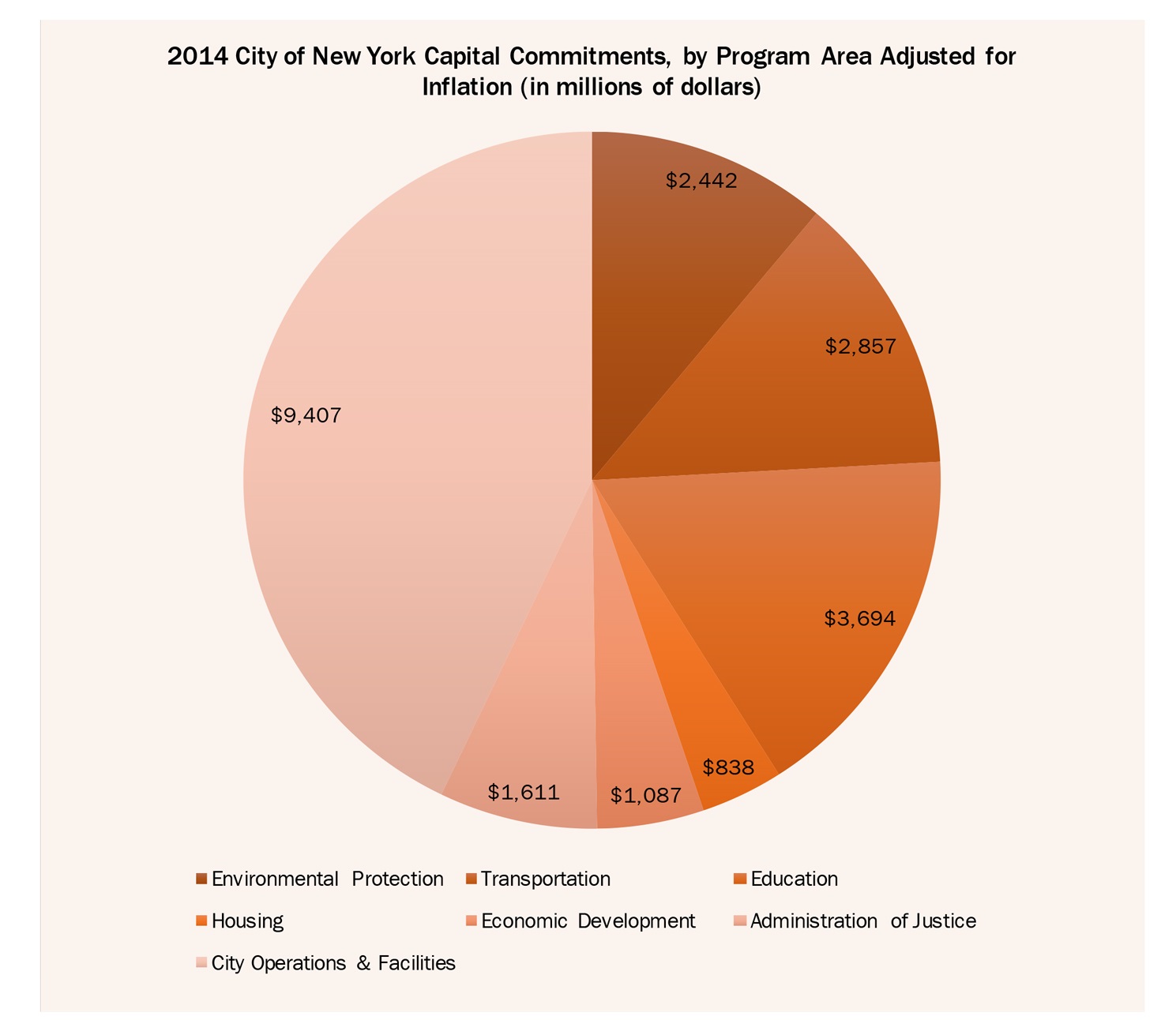 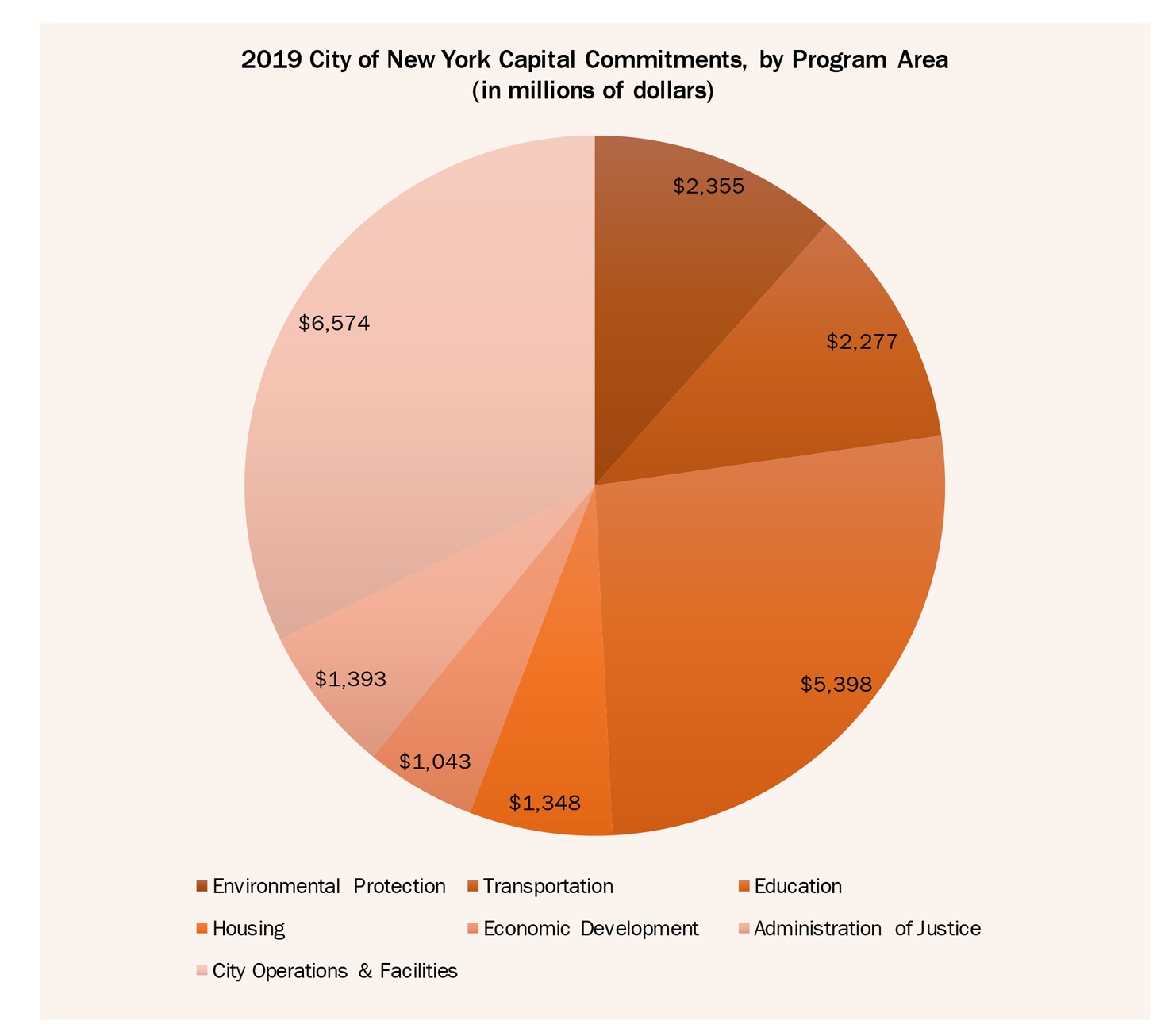 Caution Ahead: Five Years Later is a publication of the Center for an Urban Future. Researched, written, and edited by Charles Shaviro, Laird Gallagher, Jonathan Bowles, and Eli Dvorkin. Designed by Rob Chabebe.

Could a Public Works Program Save New York City’s Economy?

Staten Island has improved highways and its carbon footprint since 2012, non-profit report finds

Greenpoint’s New Public Library “Makes You Want to Move In”

Can Painted Streets Draw New Yorkers Out of Their Apartments?
Bloomberg CityLab