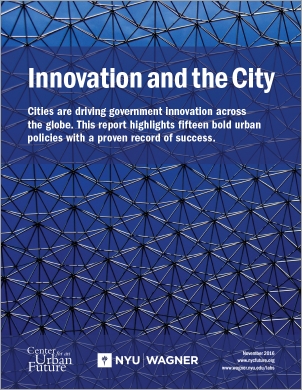 Innovation and the City

As urban growth has exploded over the past half century, cities have become the drivers of government innovation. From New York to Medellin to Copenhagen, mayors and city managers are finding novel ways to address some of the biggest challenges facing society, whether combating entrenched poverty, financing new infrastructure projects, or protecting the environment. Yet for all the innovative policies taking root in cities across the globe, there are few reliable mechanisms to share what is working. This report aims to fill the gap.

by Tom Hilliard and Neil Kleiman

In recent years, cities have become the drivers of government innovation. As urban growth has exploded over the past half century—increasing from a third to nearly 60 percent of world population today—local officials have been forced to solve problems and generate new ideas, policies, and approaches. From New York to Medellin to Copenhagen, mayors and city managers are finding novel ways to address some of the biggest challenges facing society, whether combating entrenched poverty, financing new infrastructure projects, or protecting the environment.

Yet for all the innovative policies taking root in cities across the globe, there are few reliable mechanisms for sharing what is working.

This report aims to fill the gap. Drawing on well over 100 interviews with urban policy experts in the United States and around the world—including mayors, city commissioners, academic experts, corporate executives, labor officials, and philanthropic leaders—it profiles fifteen of the boldest and most innovative municipal policy reforms of the past decade.

The fifteen policies detailed in the pages that follow include San Francisco’s Five Keys Charter School, the nation’s only charter school embedded inside a city’s correctional system; Seattle’s innovative Race and Social Justice Initiative, which established a more inclusive process for municipal policymaking; Barcelona’s Reempresa program, a rare economic development program focused on small business succession; Los Angeles’ new model for integrating workforce and educational services for youth; São Paulo’s innovative plan to capture value from new real estate development to help cover the cost of infrastructure improvements; and a path-breaking initiative from Malang, Indonesia, which uses revenue generated from garbage and recycling collection to fund comprehensive healthcare for low-income residents. Other ideas run the gamut from a crowd-sourced mapping project in the slums of Nairobi, Kenya, to a novel integration of the public housing authority and school system in Tacoma, WA, demonstrating the broad range and scope of city initiatives explored in this report. 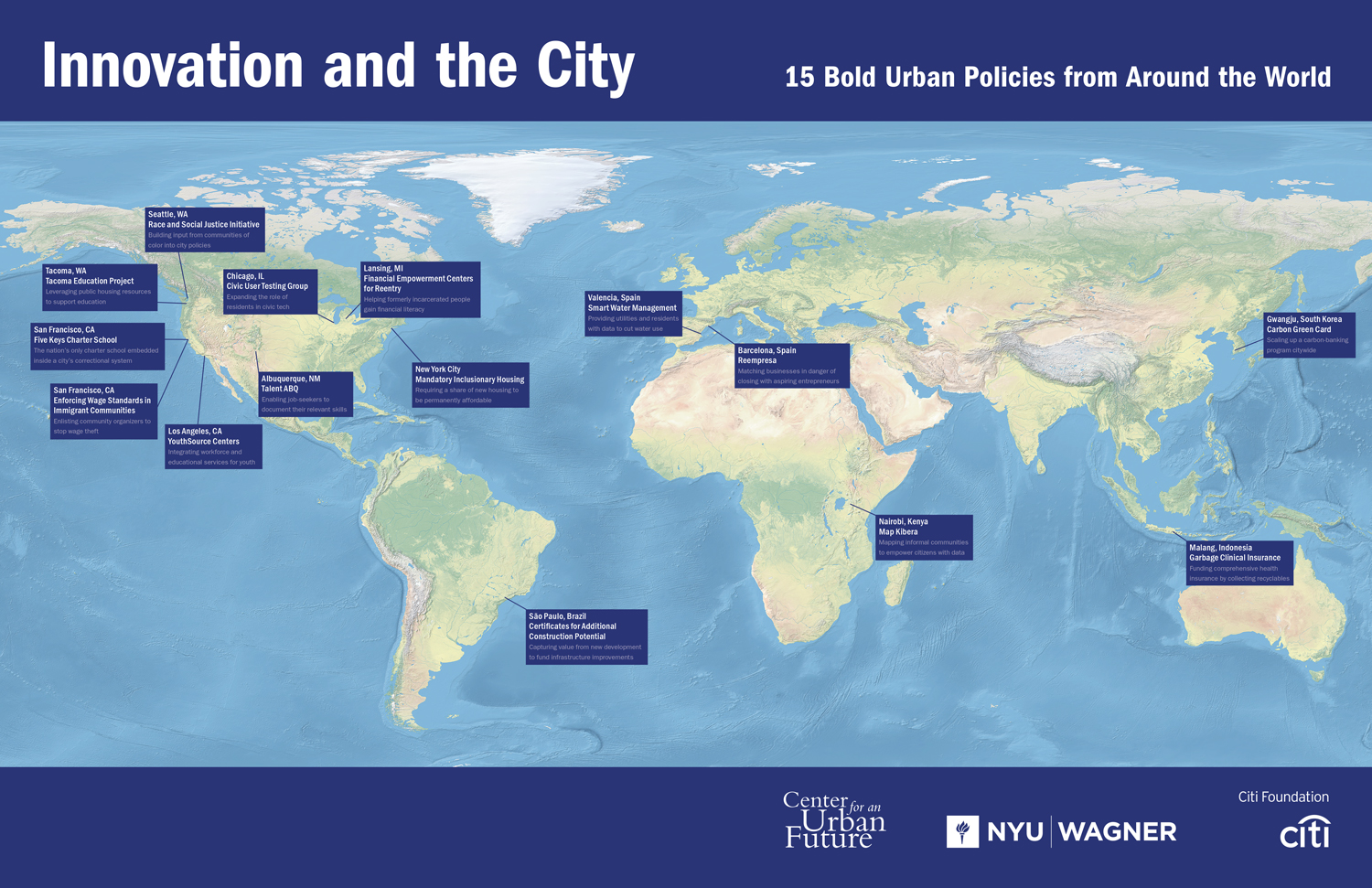 In publishing this catalogue of the best urban policy reforms that have been tried and proven effective, our hope is that city officials around the world won’t have to reinvent the wheel when designing new programs and initiatives to solve some of their cities’ biggest challenges. Instead, they’ll be able to draw inspiration from successful programs and initiatives launched by their peers.

This effort is rooted in a unique partnership: the Center for an Urban Future, one of New York’s leading think tanks, paired with NYU Wagner, a public service graduate school known for blending theory and practice. The entire project has been supported by Citi Foundation, a philanthropy anchored in New York with a strong tradition of promoting economic progress and municipal innovation throughout the world. This report is an update to our 2013 Innovation and the City study. That two-part report highlighted a total of 30 municipal innovations from cities across the United States and around the globe. The first installment identified fifteen innovations that could work in New York City. Based on the extremely positive feedback we received from New York and many other cities around the country, we issued a second installment of fifteen additional policies that held great potential for replicability in cities outside New York.

This edition follows the same research approach as our 2013 report. But rather than focusing on policies with potential for replicability in New York, the ideas profiled here are broadly applicable to a range of municipalities throughout the United States and around the world.

We have also maintained the same rigorous vetting process. Our research methodology operates like a funnel: broadly identifying new ideas at first, systematically winnowing them down, and then carefully editing the final slate of reforms into a readable format that pinpoints critical elements for officials interested in adopting them.

To find these ideas we cast a wide net at the outset. Over the past six months, researchers at the Center for an Urban Future and NYU Wagner interviewed nearly 150 policy experts in cities across the globe. We spoke to mayoral chiefs of staff, foundation program officers, officials at the World Bank and the United Nations, and other journalists and researchers who focus on urban reform. This phase yielded a first cut of 120 promising policies that deserved a closer look. We applied our criteria to gauge the viability of these ideas and found that just 30 made the cut. We then asked a group of international experts to review the innovations and provide critical feedback (see full list of participants at the end of the report). This resulted in the final fifteen ideas presented in this report.

This report is not an exhaustive survey of worldclass ideas; there are numerous other innovative municipal policies that have proven effective that did not make it onto our list. But our catalogue represents some of the world’s very best reforms with a track record of success.

We did not focus on specific policy areas or geographic regions, and there is no comparative judgement made as to which innovations are superior. But we did find a few common themes that arose again and again. For one, gaining buy-in from administrators and traditional front-line government workers is critical. New approaches are often a shock to the system; where cities encountered resistance in the initial stages, it was frequently due to a lack of agency-level understanding of and support for the new approach. We also found that where service consumers can lead, they should. If a program is focused on community improvement, then the community should be involved or help lead the effort. And if a program is aimed at the private sector, then businesses should have a role in program design. Finally, we found that although high-capacity and relatively affluent cities tend to incubate more innovations, there are many economically challenged cities that are just as creative. In fact, economic or budgetary distress has sparked a number of the more impressive innovations we identified.

The fifteen policies profiled in this report may not work in every city, and each will need to customize these ideas to suit their particular locale. But taken together, the report presents the “art of the possible” for city leaders committed to wide-ranging and broad reaching improvements.

Written by Tom Hilliard, senior researcher, Center for an Urban Future (CUF) and Neil Kleiman, director, Wagner Innovation Labs. Edited by Eli Dvorkin and Jonathan Bowles. This project was made possible through the generous support of the Citi Foundation.

General operating support for CUF is provided by the Bernard F. and Alva B. Gimbel Foundation. We are also grateful for support from Fisher Brothers for CUF's Middle Class Jobs Project.

Center for an Urban Future is a catalyst for smart and sustainable policies that reduce inequality, increase economic mobility, and grow the economy in New York City. An independent, nonpartisan policy organization, CUF uses fact-based research to elevate important and often overlooked issues onto the radar of policymakers and advance practical solutions that strengthen New York and help all New Yorkers participate in the city’s rising prosperity.

Tech is moving beyond cities to focus on civic engagement in every U.S. county

Harnessing Technology and Innovation to Save the World’s Cities

This report was made possible through the generous support of the Citi Foundation.

Tech is moving beyond cities to focus on civic engagement in every U.S. county
Tech Crunch

Harnessing Technology and Innovation to Save the World’s Cities
Newsweek

Tech is moving beyond cities to focus on civic engagement in every U.S. county
Tech Crunch

Harnessing Technology and Innovation to Save the World’s Cities
Newsweek