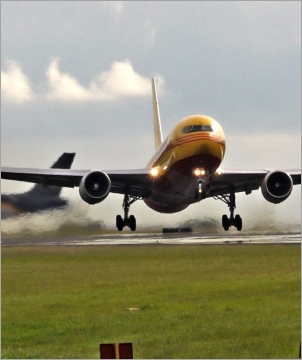 In this testimony before the New York City Council Committee on Economic Development, CUF's policy director, Matt Chaban, argues that the city, state, and Port Authority must address the woes of JFK's shrinking air cargo industry. Not just global commerce but thousands of good-paying jobs are at stake.

Before the New York City Council Committee on Economic Development

Good morning Chair Garodnick and members of the committee. Thank you for this opportunity to testify. My name is Matt Chaban, and I am policy director of the Center for an Urban Future. We’re an independent, nonpartisan think tank based in Manhattan. Our two-decade mission has been advancing policies to increase economic opportunity by growing the economy for all New Yorkers.

Most of us have probably just returned from Thanksgiving trips to visit family, and many likely passed through the region’s three airports. They were almost certainly crowded and congested, since even on a typical day, they are among the busiest in the world.

Those in the air cargo industry would do just about anything to have such problems, as I imagine we will hear from them today. The fact is, as the Center revealed in our Freight Forward report released this July, while passenger levels at JFK International have reached a record of 58.9 million in 2016, air cargo tonnage has fallen to historic lows.

This imperils not only a link to the global economy and an engine of the local one, but a vital source of strong middle-class jobs. The city must work to stop JFK's air cargo free fall.

In the past five years, cargo volumes are down 6.3 percent, to 1.26 million metric tons. Since 2004, when volume peaked at 1.7 million metric tons, air cargo is down more than a quarter. That 1.26 million may still sound like a lot, but whereas JFK was the leading air cargo destination in the world into the early 1990s, it now ranks seventh nationally and 22nd internationally. This despite companies like Amazon stoking record shipments of goods around the country and the globe, as we saw with the company’s blockbuster weekend sales.

In fact, JFK runs counter to the national trend. Airports ranging from LAX to Miami to Chicago and even Newark are all up the past five years, with the national air cargo volume rising 6 percent; Chicago's rose a whopping 38 percent. Over the past two years Indianapolis is the only other of the top 15 airports not to see growing cargo volumes.

The decline in air cargo movements at JFK is a major problem for New York City’s economy, particularly at a time when so few good-paying, middle-class jobs are being created in the five boroughs.

Over the past couple of years, the Center for an Urban Future has focused significant attention on the need to create more middle class jobs in New York City. As we’ve detailed in our Middle Class Project—a research initiative funded by Fisher Brothers and Winston C. Fisher—while the city’s economy has been booming, adding around 700,000 jobs over the past decade, relatively few of those positions have been middle-income jobs that are accessible to a large segment of New Yorkers.

The air cargo sector should be a key part of city efforts to preserve and grow middle class jobs.

There is actually reason to believe that—with the right support—New York’s air cargo sector has significant potential for growth in the decades ahead. According to the most recent Aerospace Forecasts from the Federal Aviation Administration, air cargo movements in and out of U.S. airports are projected to increase at an average rate of 3.1 percent per year through 2037.

If JFK could capture a proportional share of this growth, it would mean hundreds if not thousands of new middle-class jobs for New Yorkers.

At a minimum, New York needs to hold onto the good-paying jobs already associated with the city’s air cargo sector.

JFK’s air cargo industry sustains some 34,000 jobs citywide, both on-airport and in off-airport warehouses, distribution facilities, and regional suppliers, according to the Port Authority’s count. Of these, more than 15,000 jobs are at the airport itself, comprising roughly 20 percent of JFK's total on-airport workforce.

Air cargo workers earn on average more than $44,000 annually, with pathways to supervisory roles and higher incomes. Roughly four out of five of these jobs are accessible to workers with no more than a high school degree.

City and state officials can help this industry take off again.

Over the years, the Center has put forth a number of recommendations for city and state economic development officials, as well as the Port Authority, to address the challenges facing New York’s air cargo sector. Here are a few of our suggestions:

Open the Belt Parkway to commercial vans. Currently, the Belt Parkway prohibits all commercial vehicles, from 53-foot trucks to the commercial vans often used by overnight delivery companies. The Belt would provide a much faster alternative route for companies delivering goods to offices in lower Manhattan, and could possibly enable Kennedy to recapture some of the lost overnight freight companies that shifted to Newark Airport over the past two decades. This change would not open the door for trucks to operate on the parkway, since the low height of bridges over the Belt simply makes it impossible for trucks to pass.

Modernize aging cargo facilities at JFK. To keep airlines from moving their freight business to other airports, the Port Authority should address the serious shortage of affordable, modern cargo facilities at Kennedy. According to our 2013 Caution Ahead report, JFK’s air cargo facilities are 40 years old on average, with 63 percent of cargo space considered “non-viable,” or unfit for modern screening, storage, and distribution.

Modernize the air traffic control system. To ensure that New York’s airports can handle anticipated growth, the FAA and Congress need to approve—and fund—a strategy to address gridlock in the airspace above New York and reduce incessant airline delays.

This work is a part of the Middle Class Jobs Project, a research initiative made possible by the generous support of Fisher Brothers and Winston C. Fisher.