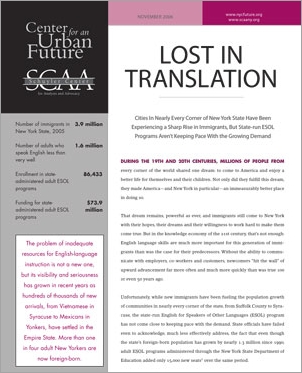 This new report finds that while immigrants have become a growing part of the workforce in nearly every corner of New York State, the state-run English for Speakers of Other Languages (ESOL) program has not come close to keeping pace with the demand, creating a skills gap that could hurt the state's economic competitiveness.

Help Wanted: Getting NY’s Workers the Language Skills They Need

New Report Calls On Spitzer To Increase Funding for ESOL

Teaching Adults to Read, Write Helps Their Kids, Our Economy

Rochester Democrat and Chronicle, by Robert Mahar and Kevin Smith, May 09, 2007

Why Don’t You Teach English?

Facing A Failure to Communicate