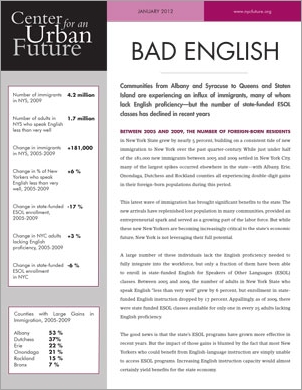 Communities from Albany and Syracuse to Queens and Staten Island are experiencing an influx of immigrants, many of whom lack English proficiency—but the number of state-funded ESOL classes has declined in recent years.

Between 2005 and 2009, the number of foreign-born residents in New York State grew by nearly 5 percent, building on a consistent tide of new immigration to New York over the past quarter-century. While just under half of the 181,000 new immigrants between 2005 and 2009 settled in New York City, many of the largest spikes occurred elsewhere in the state—with Albany, Erie, Onondaga, Dutchess and Rockland counties all experiencing double-digit gains in their foreign-born populations during this period.

This latest wave of immigration has brought significant benefits to the state. The new arrivals have replenished lost population in many communities, provided an entrepreneurial spark and served as a growing part of the labor force. But while these new New Yorkers are becoming increasingly critical to the state’s economic future, New York is not leveraging their full potential.

A large number of these individuals lack the English proficiency needed to fully integrate into the workforce, but only a fraction of them have been able to enroll in state-funded English for Speakers of Other Languages (ESOL) classes. Between 2005 and 2009, the number of adults in New York State who speak English “less than very well” grew by 6 percent, but enrollment in state-funded English instruction dropped by 17 percent. Appallingly, as of 2009, there were state funded ESOL classes available for only one in every 25 adults lacking English proficiency.

The good news is that the state’s ESOL programs have grown more effective in recent years. But the impact of those gains is blunted by the fact that most New Yorkers who could benefit from English-language instruction are simply unable to access ESOL programs. Increasing English instruction capacity would almost certainly yield benefits for the state economy. 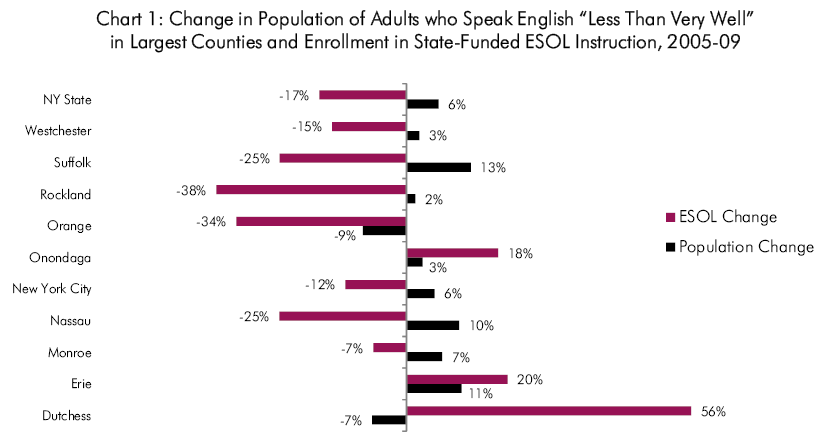