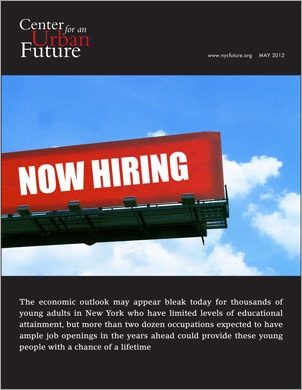 While young adults without a college degree are among those who are having the hardest time finding decent paying jobs today, this report provides a ray of hope. It identifies more than two dozen occupations in New York City that are expected to have ample job openings in the years ahead which pay decent salaries and which are accessible to young adults with low levels of educational attainment.

Even before the Great Recession began, an alarming number of young adults in New York City between the ages of 18 and 24 were neither in school nor working. The employment challenges for these New Yorkers have only magnified in recent years. There are now an estimated 172,000 of these “disconnected youth” in the five boroughs. Though the overall economy is again on the upswing, the city’s unemployment rate stands over 9 percent—and young adults with low levels of educational attainment and limited work experience are among those who are having the hardest time finding decent paying jobs.

Although many young adults in New York understandably wonder whether they will ever be able to access jobs that provide a pathway to the middle class in an economy where more and more of the decent-paying jobs require a college degree, the outlook isn’t all bleak. Our research has identified 26,000 openings a year for much of the next decade in 26 occupations that older young adults could realistically fill. Seven of these are among the top 16 occupations “with the most expected hiring” in New York City, according to projections made by the New York State Department of Labor (NYSDOL).

These are not the lowest paying jobs or those with little chance for advancement. Twenty-two of the 26 occupations we identified, with an estimated combined total of nearly 15,000 openings annually, pay a median wage of at least $25,000. In contrast, an entry-level home health aide in New York City earns $17,360 on average. The other 11,000 entry-level openings are in four retail and hospitality sector occupations that offer faster promotions to managerial positions than most other industries and, perhaps most important, provide crucial work experience and training to young people who have been, at best, sporadically employed.

Many of these employment opportunities will result from natural job turnover. For instance, NYSDOL projects that job turnover will result in thousands of openings a year in entry level occupations such as office clerk. Demographic and social changes will create thousands more. The number of New Yorkers aged 65 and over is expected to grow 35 percent by 2030,4 leading to employment growth in sectors such as healthcare, transportation, and office and administrative support. Across three healthcare occupations—pharmacy technicians, medical assistants and certified nursing assistants—there are projected to be 970 job openings a year. Similarly, there could be as many as 600 job openings each year for paratransit drivers, who operate Access-a-Ride and other vehicles to transport seniors and the disabled. With high unemployment and wages at a plateau, more people are struggling to make ends meet, pay their bills and stay debt free—and that is prompting bill collection companies to hire workers. Growth in the number of tourists visiting New York will likely mean employment gains at stores, restaurants, hotels and attractions that cater to these visitors.

These trends present a unique chance for helping New York’s young adults gain a foothold in the workforce. But, as we detail in this report, making the most of this opportunity will require new strategies and policies from both city policymakers and the private and nonprofit workforce development providers who work with this population.

This study follows our Chance of a Lifetime report, published in 2006, which concluded that the anticipated retirement of tens of thousands of Baby Boomers would create an unprecedented opportunity for New York City to move significant numbers of young, at-risk New Yorkers into decent-paying, career-track jobs. That report profiled seven industries with projected job growth, modest entry qualifications and solid career prospects—from health care and construction to automotive repair and information technology.

Much has changed since 2006. For instance, the construction industry has lost thousands of jobs and, at least for now, no longer holds as much promise for young people. Similarly, many of the anticipated retirements in fields such as health care did not happen as the financial crisis prompted many older workers to continue working. Further, several hospitals and nursing homes have closed in recent years, although there are new opportunities in outpatient care.

At the same time, however, the challenges facing disconnected youth today are arguably even more pressing.

With all of this as a backdrop, JobsFirstNYC, a not-for-profit intermediary focused on reconnecting young adults to the economy, provided support for us to update and expand our analysis in light of the current economic climate. They charged us with looking ahead for future job prospects, not merely evaluating the current job market for young adults in New York City.

We began with a thorough review of NYSDOL employment projections through 2018, focusing on occupations that meet four criteria: they are expected to have at least 100 job openings a year in New York City through 2018; they pay a median annual wage of at least $25,000 or can lead fairly directly to a job paying at that rate; they require little formal training—ideally less than four months; and a substantial share of the workers have only a high school diploma, high school equivalency (HSE) diploma or less.

In other words, our primary focus was to identify decent-paying jobs that will be in demand over the next decade and are accessible to the city’s disconnected youth. Further, although the roughly 172,000 New Yorkers age 18 to 24 who are out of school and out of work have a range of skills and academic abilities, this report focuses on those at the lower range of educational attainment who are traditionally the hardest to reconnect to the workforce. And where formal training is required, we selected occupations in which the training was not particularly costly. Occupations such as heating, ventilation and air conditioning repair, for example, were omitted because the least expensive training program we found cost $5,960. The threshold of at least 100 job openings a year was set in acknowledgement of the difficulty in developing cost-effective approaches to train and place youth in occupations with few openings.

In addition to relying on Labor Department projections, we field-tested whether these occupations are indeed realistic for young adults with limited educational attainment by interviewing more than 75 leaders from local businesses, industry associations, workforce training organizations, industry associations, labor unions, academia and government. For example, economists and labor market experts were asked to confirm assumptions about job growth and turnover, directors of the city’s Workforce1 Career Centers and business managers were queried about whether and under what circumstances disconnected youth would be hired for the selected occupations, and colleges and community-based organizations that work with young adults were asked about the training and supports necessary to make them job-ready employment candidates, and about employer expectations and preconceptions.

What we found is encouraging. Altogether, we identified 26 occupations that disconnected youth could realistically fill and which can be a first step toward economic self-sufficiency (See chart of “26 Promising Occupations” on page 7). These occupations fall into seven economic sectors: healthcare, property maintenance, transportation, telecommunications/utilities, office/administrative, retail and hospitality.

Some occupational trends of note include:

Out of School And No Where to Work