Out of Reach: Too Few New Yorkers Are Earning a High School Equivalency Diploma

In March 2017, the Center for an Urban Future published “Taking to TASC,” which revealed that the number of New Yorkers taking and passing the high school equivalency (HSE) exam had declined in virtually every corner of the state between 2010 and 2015. This new policy brief adds the two most recent years of data to our analysis—2016 and 2017. It shows signs of improvement statewide, as well as continuing cause for concern.

The good news is that there has been a slight uptick in the number of New Yorkers taking and passing the high school equivalency exam over the past two years. The number of HSE test-takers rose from 26,041 in 2015 to 28,387 in 2017—a 9 percent increase, and the number of test passers went up nearly 7 percent during that time, from 13,505 to 14,419. In 8 out of 10 regions across the state, the number of test takers rose between 2015 and 2017, and the number of students passing the test increased in 5 out of 10 regions—led by double-digit gains in the North Country (35 percent increase in attainment) and the Mohawk Valley (16 percent).

New York is tied with Texas for the lowest HSE pass rate in the nation, according to our analysis of the 49 states plus the District of Columbia that reported a statewide pass rate in 2016.1

This steep decline in high school equivalency attainment largely stems from two forces: the switch to a new high school equivalency exam and continued decline of adult education funding. In 2014, New York State replaced the long-reigning GED exam with the Test Assessing Secondary Completion (TASC). Education officials made the change in part because the GED was getting an overhaul, which would make the test harder to complete—as well as more expensive and difficult to administer. However, the TASC is also harder than the old GED, leading to further declines in what was already the nation’s lowest pass rate. New York was one of 24 states to replace the GED in whole or in part, and it almost certainly made the right decision to stave off an even worse outcome. But student outcomes continue to fall well short of the pre-TASC era.

New York is not alone. Every state in our analysis has seen significant declines in the number of high school equivalency test-takers and -passers since 2012. Between 2012 and 2016, the number of test-takers dropped by 46 percent nationally, from 557, 394 to 302,096, compared to a 42 percent decline in New York. The number of people who passed their HSE exam and obtained a diploma dropped by 42 percent nationally (from 361,504 to 209,709) and 41 percent in New York.

The ability of adult educators to meet the challenge of switching to a harder exam has been hampered by declining state and federal adult education funding. Congress has cut funding for adult education through the federal Workforce Innovation and Opportunity Act by 20 percent over the past 15 years. The main state funding source, the Employment Preparation Education (EPE) program, has not increased since 1995. Only a small program that serves nonprofits, Adult Literacy Education (ALE), has received even a small funding bump over the past several years. Investment in adult education has stagnated even as the challenges facing adult learners mount.

Without a major effort to boost the number of New Yorkers taking and passing a high school equivalency exam, attainment is highly unlikely to recover to pre-TASC levels. On the contrary, limited access to a high school equivalency appears to be the new normal. In the years ahead, few eligible adults will obtain an HSE in New York unless state and local policymakers take decisive action to reverse these trends.

Governor Cuomo and the State Legislature should increase their focus on supporting adult students. The state should boost funding for EPE by 40 percent to keep pace with inflation and double support for ALE from just over $7 million annually to roughly $15 million. The state also needs to focus attention and resources on supporting the transition from the GED to the TASC, which will mean increasing funding for testing centers, accelerating the development of computer-based testing centers, and expanding professional development to train instructors. Most critically, the state should ensure that every adult planning to take an HSE exam has access to a comprehensive HSE preparation course that will enable them to earn a diploma and move on to a postsecondary credential.

The Center for an Urban Future’s previous study of high school equivalency attainment analyzed data from 2010 through 2015 and found a major decline in the number of New Yorkers taking and passing the test. This report builds on “Taking to TASC” by adding in the two most recent years of data, 2016 and 2017, and traces the overall trends in HSE attainment across the state.

In addition, this report documents the 2016 high school equivalency testing and passing rates of 49 states and the District of Columbia. The Center for an Urban Future combined testing and passing data for all three major HSE publishers: the Educational Testing Service (publisher of HiSET), DRC (publisher of TASC), and the GED Testing Service. The Center then filled out the gaps in this data by contacting adult education directors in several states for the relevant data points. Oklahoma did not respond, but all other states provided the requested data.

HSE attainment has improved since 2014, but remains far below pre-TASC levels. 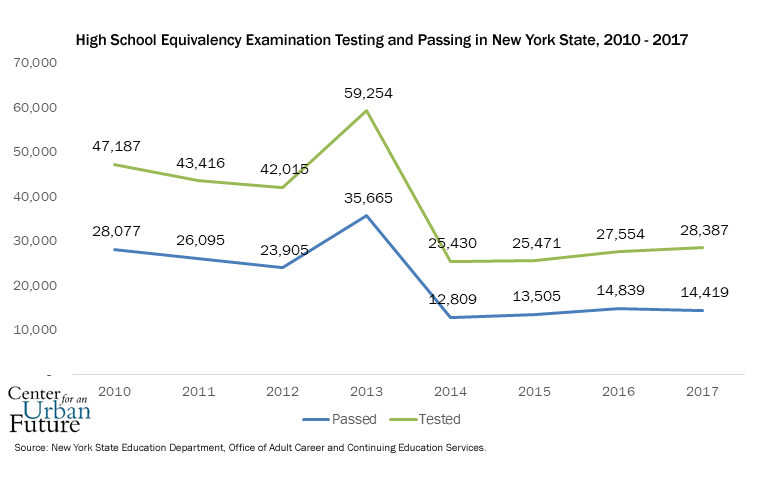 The high school equivalency pass rate has fallen since introduction of the TASC. 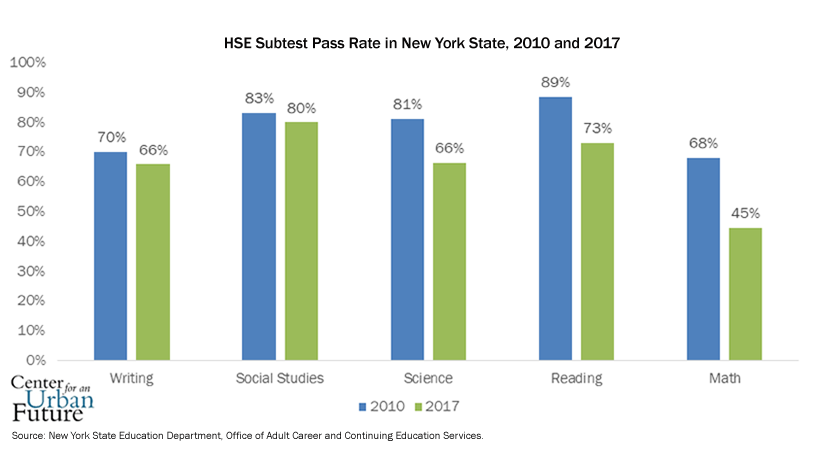 New York and Texas have the lowest pass rates in the nation, but New York’s drop in HSE attainment is on par with similar declines in other states. 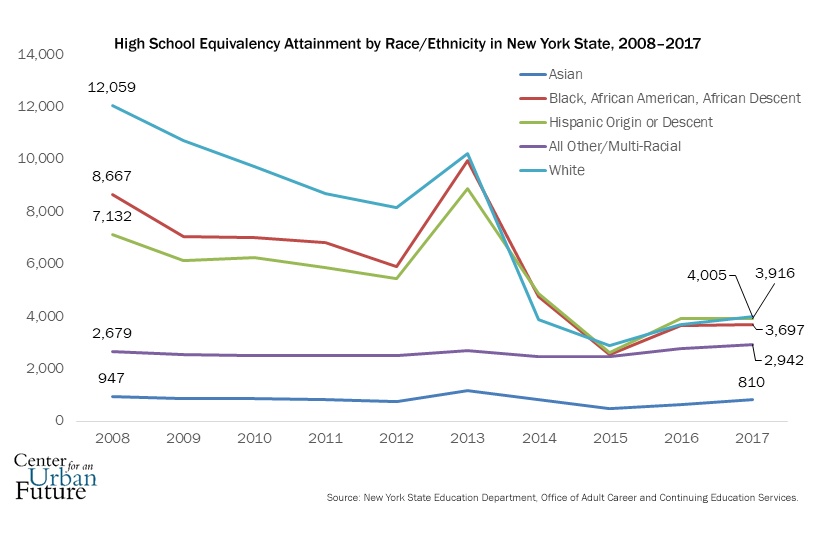 The population of adult basic education students at the high school equivalency level has declined sharply. 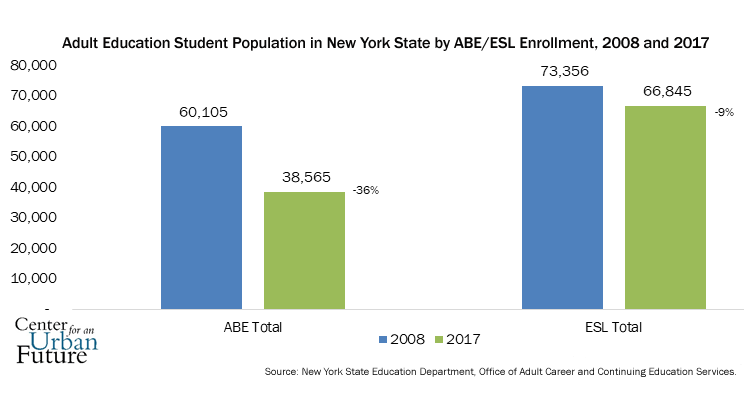 More New Yorkers are graduating high school, but few who drop out are earning a high school equivalency diploma.

Between 2015 and 2017, most of New York State’s ten regions saw at least slight improvements in the number of students taking the high school equivalency test. Eight out of ten regions experienced increases in test-taking, and four saw increases above 10 percent. The picture was not as bright in actual high school equivalency attainment, however. Only five regions saw increases in attainment, and only two of those regions exceeded a 10 percent increase (Mohawk Valley and North Country).

Central New York: Test-taking in the Central New York region dropped by 57 percent between 2010 and 2015 and rebounded by 13 percent from 2015 to 2017, for a total decline of 51 percent over seven years. But HSE attainment declined by 63 percent over that same period, because over those seven years, the HSE pass rate fell from 69 percent to 52 percent.

The New York State Education Department (NYSED) is taking some steps to boost HSE attainment. In Spring 2018, the Board of Regents approved an innovative new policy to allow students to substitute a Regents Exam passing score for the relevant TASC subtest, which could accelerate attainment for students who passed at least one Regents Exam before leaving high school. NYSED is also performing extensive professional development to assist providers in transitioning from the GED to the TASC exam.

Still, rates of taking and passing the high school equivalency test remain alarmingly low. It is possible that NYSED’s new route to an HSE will help turn around the decline, at least for younger adults. But larger obstacles need to be identified and addressed. Reversing this decline will require a major new focus from Governor Cuomo and the State Legislature and a new level of investment in HSE preparation and testing and adult education.

1. Note that because comparative pass rate data is derived from the annual reports of the TASC and HiSET preparers, New York testing and passing data will differ slightly than other data used in this study.
2. This analysis excludes Oklahoma, which did not provide data for this study. Our national estimate accounts for 96 percent of the HSE-eligible population in the country.

General operating support for the Center for an Urban Future has been provided by The Clark Foundation, the Bernard F. and Alva B. Gimbel Foundation, and the Altman Foundation. Additional support provided by the Working Poor Families Project, a national initiative supported by the Annie E. Casey and Joyce Foundations, which partners with nonprofit organizations in 23 states to investigate policies that could better prepare working families for a more secure economic future. CUF is also grateful for support from Fisher Brothers for the Middle Class Jobs Project. CUF is also grateful for the assistance of Working Poor Families Project affiliate groups in sourcing HSE data from their respective states.

"Out of Reach: Too Few New Yorkers Are Earning a High School Equivalency Diploma" is a publication of the Center for an Urban Future. Researched and written by Senior Fellow for Economic Opportunity Tom Hilliard. Edited by Eli Dvorkin and Jonathan Bowles. Additional research by Jason Goldberg and Arielle Rutledge.

General operating support for the Center for an Urban Future has been provided by The Clark Foundation, the Bernard F. and Alva B. Gimbel Foundation, and the Altman Foundation. Additional support provided by the Working Poor Families Project, and from Fisher Brothers for the Middle Class Jobs Project.