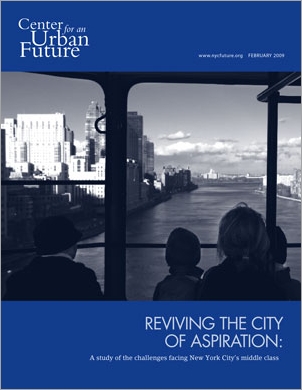 This major report by the Center for an Urban Future, titled "Reviving the City of Aspiration," concludes that New Yorks longstanding legacy as a place that both sustained a large middle class and elevated countless people from poorer backgrounds into the middle class is now in serious jeopardy.

Questioning the Future for the Middle Class

Would You Stand on Planes for Cheaper Tickets?

Time to Get Tough

Popping the question: Do we stay on Staten Island or do we go?

Why New York’s future is fleeing

Study: Canarsie workers must deal with one of nation’s longest commutes

Middle Class Blues in a City of Extremes

Squeezed on all sides

No, New York City is not losing its soul

New York Should End Its Obsession With Manhattan

Shocking News: The Middle Class Has It a Lot Harder Here Than Anywhere Else

Will Affordable Housing Plan Leave Middle Class New Yorkers Out in the Cold?

Middle Class Being Squeezed Out Of The City, Study Finds

It’s Tough Out There for a Middle-Class New Yorker

Report: NYC Most Expensive City To Live In, Hands Down

Urban Inequality Could Get Worse

The Mayor Who Added Jobs, and Lost Some, Too

Why taxes should be adjusted for geographic cost of living

Away from the Gated Community

What Is Middle-Class in Manhattan?

To Live Like A Middle Class Citizen In NYC, You Have To Make At Least $80,000

City to Middle Class: Just Not That Into You

You need more green to live in Queens

NYC, London vie for the bottom

New York City’s Middle Class Is Voting With Their Feet

Manhattanites at any cost: What some will do to stay on the island

Would You Stand on Planes for Cheaper Tickets?
The Atlantic Online

Would You Stand on Planes for Cheaper Tickets?
The Atlantic Online