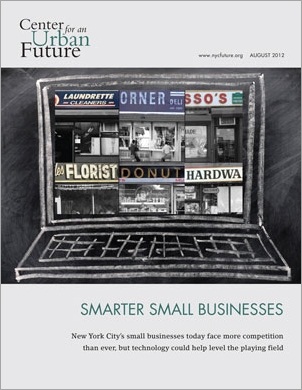 New York City’s small businesses today face more competition than ever, from national chains with deep pockets to overseas companies with significantly lower costs. These new competitive pressures have made a challenging place to do business even more difficult for the city’s small firms, many of which operate on slim profit margins and have little room for error.

Technology could help level the playing field for many of the city’s small businesses. By adopting basic technologies that are taken for granted by large corporations—from Google ads and customer management software to digital payroll programs and point-of-sale systems—small businesses could expand their customer base, reduce their costs and become more efficient. Technology can springboard some small firms to the next level and help others simply improve their profit margins enough to survive.

Unfortunately, too few small businesses in New York are taking advantage of technology in a meaningful way. Across the city, countless neighborhood-based retail and services firms still do not have websites or engage in online marketing. Very few bodegas use technology to track changes in their inventory so they can make better decisions about which items to stock on their over-crowded shelves. A significant share of the city’s small businesses haven’t yet shifted to automated payroll systems and accounting software, which can save them both time and money.

The technology gap is particularly acute among neighborhood-based retail and services firms, especially those owned by low and moderate income New Yorkers and those located outside of Manhattan’s central business districts. In many of these communities, our research suggests that fewer than 20 percent of small businesses are effectively capitalizing on technology.

This is not only a missed opportunity for countless small businesses across the five boroughs. It is a competitive threat for New York at a time when small businesses are only becoming more important to the city’s economic future. Fortunately, as this report details, there are a number of things that that could be done—by small business owners themselves, as well as city economic development officials and nonprofit small business assistance organizations—to greatly increase the number of small firms that use technology to make them smarter, more resilient and better equipped to grow.

Small businesses may be the backbone of the nation’s economy, but they are particularly crucial to New York City. Just over 90 percent of the businesses in the New York metropolitan area have fewer than 20 employees, a higher percentage than all but one of the 363 metro regions in the United States.

Beyond sheer numbers, small firms have been anchors of local economic growth in communities across the five boroughs. They also provide the goods and services that make New York unique. And they are sparking employment growth at a time when many large corporations are downsizing or opting to add new employees elsewhere.

But in recent years, it has become apparent that too many of these businesses have been struggling to compete in the changing 21st Century economic landscape. These struggles prompted us to examine whether technology has the power to help small businesses in New York become more competitive.

The latest in a long line of Center for an Urban Future studies focusing on opportunities to boost the competitiveness of New York’s small businesses, this report documents the extent to which small firms across the five boroughs are incorporating technology into their daily operations; details the obstacles that keep more small businesses from taking advantage of technology; highlights how technology can aid small firms; and outlines a series of recommendations for what city and state government agencies—as well as the private sector and philanthropic interests—could do to help small firms implement these technologies. While our assessment looks broadly at small businesses across the five boroughs, the report includes a special focus on firms owned by low and moderate income New Yorkers, including immigrant and minority business owners.

The report, which was funded by Citi Community Development, is based on five months of research and interviews with more than three dozen small business experts, including business owners, leaders of small business support organizations, small business lenders, IT consultants and officials from government agencies that work with small firms. Further, our research was greatly informed by an extensive survey we conducted with more than 230 small business owners located across the five boroughs, who were asked about their use of technology in daily business operations, and their perceptions of the role it plays in making them more competitive. We also conducted numerous on-the-ground interviews in three neighborhoods—East Harlem, Brownsville and Richmond Hill—to explore in greater depth the prevalence of technology in neighborhood businesses. Just over half of those who responded to our survey earned under $55,000 in annual household income, classifying them as low-to-moderate income (LMI) individuals.

What we learned is that technology is no longer an option, but an essential tool for businesses to remain competitive. This is not just the case for large corporations and high-tech startups, but for nearly all small businesses—from the corner bodega facing more competition from chain grocery  and convenience stores and pharmacies to the neighborhood restaurant that needs to attract diners from outside the immediate neighborhood to survive.

Today, numerous tools exist for the average mom-and-pop storefront or small-scale services business to benefit from technology. However, not enough small businesses are employing technology in their day-to-day operations. Too few small business owners in New York understand the importance of technology adoption, and among those who do understand, many don’t have a clear sense of what to do about it.

“The vast majority of business owners [in Washington Heights] are not integrating technology into their business operations.”

How pervasive is the problem? Experts vary in their assessment of the severity, but all agree it is stark—especially among businesses in low- and moderate-income communities.

Fewer than 10 of the 90 businesses along a stretch of Southern Boulevard in the Bronx are incorporating technology in a meaningful way, says Kerry McLean, director of community development for Women’s Housing and Economic Development Corporation (WHEDco), a Bronx-based nonprofit that recently helped create the Southern Boulevard Merchants Association. “There is definitely untapped potential for the use of technology and websites and social media on Southern Boulevard. And I think that is symptomatic of the Bronx.”

Only about five percent of small businesses in Washington Heights are tapping technology, according to Michelle Bhattacharyya, who until recently ran the Northern Manhattan Business Solutions Center (BSC). “The vast majority of business owners [in Washington Heights] are not integrating technology into their business operations. My staff estimates that 95 percent of folks that we see don’t have the technology they need,” she says. “When you’re looking at the immigrant sector, technology is completely underutilized.”

There is a similar disconnect in Chinatown. When asked how Chinatown businesses are integrating technology into their business operations, Wellington Chen, executive director of the Chinatown Partnership says, bluntly, “Poorly. A majority of our firms have no website. And when I offered to scan and post their menus on a business director website, a majority of them didn’t want me to do that. They don’t understand the importance or the potential payoff.”

Eduardo Giraldo, a small business owner in Jackson Heights and former president of the Hispanic Chamber of Commerce of Queens, says that “not even 10 percent” of the members of the chamber are capitalizing on technology.

“I would say 60 to 80 percent of businesses in the neighborhood do not use the Internet to market their business,” adds Edwin Nieves of the East Harlem Business Capital Corporation. “There are a lot of restaurants in the area that are run by the chefs. They don’t necessarily know the business side of what they’re doing. Maybe 70 to 80 percent of them don’t have sufficient access to technology to help their businesses grow.”

Our survey of more than 200 small business owners across the five boroughs generally confirms what we were hearing in the field. Among the results of our survey: