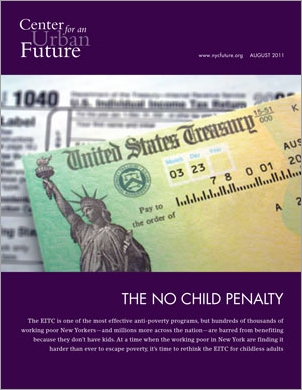 The No Child Penalty

Our new policy brief shows that while growing numbers of working New Yorkers without kids are struggling to get out of poverty, the federal government's main anti-poverty program—the Earned Income Tax Credit (EITC)—almost exclusively benefits tax filers with children. The report reveals that hundreds of thousands of low-income working people in New York—and millions more around the nation—are effectively barred from receiving benefits from the EITC, while the relatively few who do qualify receive extremely small credits.

One of the more alarming recent trends in New York City has been the rapid growth in the number of people who hold full-time jobs but still earn too little to escape poverty. New York’s working poor population has expanded in large part because of the city’s sky-high cost of living and the proliferation of low-wage jobs. Given that so many of the new jobs being created today are in retail, hospitality, health care and other sectors that pay paltry wages, the numbers of working poor will likely only growth further in the years ahead.

There is one program that is widely considered to be effective in boosting low-income working people—the Earned Income Tax Credit (EITC). The tax credit is easy to claim, has a higher participation rate than other anti-poverty programs and, because it is refundable, it enables low-income people to receive not only a lower tax liability but money back from the government, which they can use to pay down credit cards, medical bills and rent. And because it has been shown to incentivize work on the part of recipients and reduce dependence on public assistance, the EITC has enjoyed broad support from those on both sides of the ideological spectrum.

The problem, as we show in this report, is that hundreds of thousands of low-income working people in New York—and millions more around the country—are effectively barred from benefiting from the program.

Workers who do not have children are simply not eligible for the EITC if they earn more than $13,460 per year—below what a person working full time at minimum wage would earn. By contrast, a worker with just one child can earn as much as $35,535 per year and still receive a significant tax credit. Meanwhile, the maximum benefit for a worker with just one child is worth nearly six times as much as the maximum benefit for a childless worker.

Whatever the original rationale for such huge disparities, the policy makes little sense given current economic trends. In New York City, the gap between what people earn and the cost of basic necessities like housing and health care has widened significantly over the last decade. Even working people who don’t have kids to support are falling deeper into poverty, becoming homeless and finding the pathway to the middle class all but out-of-reach. As a result, the nation’s most important anti-poverty program is failing to meet the needs of a huge slice of its target population. In 2008/09, for example, there were 715,000 residents over the age of 21 in New York State who satisfied the official definition of childless worker and made less than twice the federal poverty level of $21,660 per year.

It is time for policymakers to rethink EITC benefits for childless workers. Expanding the credit for those without children would not only help hundreds of thousands of New Yorkers rise out of poverty, it would provide a powerful incentive for work in areas where unemployment is high and support struggling neighborhoods in New York and across the country.

RT @TomHilly: Much credit for the part-time TAP expansion should go to @nycfuture, which for years has urged the state to lift up New York'…
RT @JohnSurico: A small policy tweak that will have an outsized impact. We suggested this in our @nycfuture brief last year - delighted to…
"Preventive maintenance on the city’s sewer system & roads is key," says our @wetwax. "Given the scale of the clima… twitter.com/i/web/status/1…
Join us on 8/30 for our forum "Strengthening NYC's Human Services Nonprofits by Reducing Their Administrative Burde… twitter.com/i/web/status/1…
Follow @nycfuture