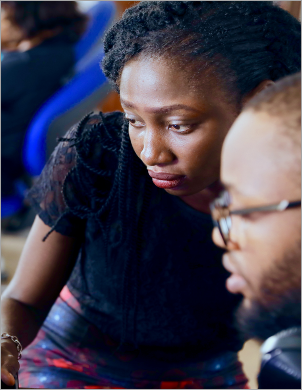 The Promise of Apprenticeships in New York

Apprenticeships increase economic mobility for people without a college degree, help employers find diverse and qualified employees, and are an ideal training model for New York's fastest-growing industries. New York can do much more to realize their potential.

by Naomi Sharp and Eli Dvorkin

New York has an enormous opportunity to greatly expand the use of apprenticeships in the years ahead. The city and state can take several practical steps to recruit more employers, lower existing barriers to apprenticeship, and support opportunities for innovation. Taken together, these steps can significantly boost the number of apprenticeships statewide, and encourage the model to expand to a wider range of industries.

Commit to doubling apprenticeships over the next five years in New York City and State. Apprenticeships are among the most effective ways to jumpstart economic opportunity for more New Yorkers, and recent investments in apprenticeship from Governor Cuomo and Mayor de Blasio are a major step in the right direction. But these initiatives should be just the beginning of an ambitious effort by New York’s state and local governments to double the number of apprenticeships over the next five years. Given the size of New York’s economy and the growing hiring needs of employers statewide, New York should push to create quality apprenticeship programs, both registered and unregistered, at a much faster pace.

Create a statewide task force with industry leaders to grow apprenticeships in every region. For apprenticeships to reach their full potential, New York State and City will need to greatly increase the involvement of employers and improve how the state markets, develops, and implements new apprenticeship programs. To inform this approach, Governor Cuomo should convene a statewide task force on apprenticeship—comprising leaders from the private sector, educational institutions, workforce development providers, economic development officials, and nonprofit intermediaries—with the goal of developing recommendations to help double the number of apprentices over the next five years. In addition, the task force should focus on strategies to align apprenticeship with the needs of each region. Empire State Development’s ten regional offices and their corresponding regional councils can contribute to the work of the task force by helping to identify regional needs and convening local employers and industry groups around the goal of expanding apprenticeships.

Make New York City the leading hub of apprenticeship in the nation. Mayor de Blasio deserves credit for establishing ApprenticeNYC, but he should go well beyond that program’s modest goals and chart a course for creating the nation’s largest urban apprenticeship initiative. In a city with a labor force of more than 4 million and where a growing number of businesses are struggling to find employees with the skills they need, the mayor needs to aim higher than simply creating 450 apprenticeships through ApprenticeNYC. The de Blasio administration should at least double that goal. Expanding apprenticeships in a dramatic way would help the mayor accomplish his goal of reducing income inequality. New York City already has an ecosystem of industry associations, community-based organizations, training organizations, nonprofits, and other groups with connections to employers that can play an intermediary role if given the resources. The city should make grants available for these non-government organizations to act as intermediaries and create their own registered and high-quality unregistered apprenticeships.

Expand ApprenticeNYC and move it outside government. The city should follow through on its goal to create 450 apprenticeships through ApprenticeNYC, and quickly move beyond manufacturing—the first industry targeted for apprenticeships—by developing new apprenticeships in tech and healthcare. The city should also expand its approach to include promising sectors outside the current scope, such as the creative economy and hospitality. The Department of Small Business Services is also right to recognize that the most effective long-term goal would be to bring this program outside of government. That should entail more than transferring responsibility for individual programs to intermediaries: The city should follow the lead of Colorado and make ApprenticeNYC a public-private partnership that can live and thrive outside of government.

Create a new office to lead the expansion of apprenticeship programs across New York State outside of the Department of Labor. In New York, housing the state’s apprenticeship efforts in the State Department of Labor has become a barrier to employer engagement. For the most part, businesses don’t see NYSDOL as an agency that has their interests at heart. That’s largely due to the fact that the department is charged with enforcing labor and wage laws, and not with economic development. Although New York absolutely needs an agency focused on labor enforcement, expanding apprenticeships across the state will be difficult without more employer buy-in. And that’s unlikely to happen at NYSDOL. The states that have had success with apprenticeship have expanded their approaches beyond the Department of Labor, creating new agencies or mobilizing existing ones to lead their apprenticeship efforts. Similarly, New York needs an apprenticeship agency that has strong connections to employers. The best option would be to follow the model of Colorado and create a public-private partnership designed to gain the trust of employers and focus full-time on apprenticeship. Under this model, the state would help establish an organization that is outside of government but funded with state support and includes representation from state agencies including the Labor Department and Empire State Development. Another option is for Empire State Development—the state’s economic development agency—to oversee apprenticeship programs in the state while also working with experienced apprenticeship staff from NYSDOL.

Make CUNY and SUNY the engine of New York’s apprenticeship system. CUNY and SUNY should become the anchor of the state’s apprenticeship system, actively seeking employer partners and developing programs to ensure that many more students have access to apprenticeships while earning college credit. In particular, New York’s community colleges can do much more to prepare students for careers by developing two-year associate’s degrees and shorter-term credentials that double as the related instruction component of apprenticeship programs in growing fields. The state’s public colleges are ideal providers of related instruction for apprentices: They can synthesize the needs of multiple employers into a shared curriculum, while guaranteeing the apprentice an academic credential. But few campuses are developing the close relationships with employers required to get these programs off the ground. CUNY and SUNY should establish a goal of bringing apprenticeships to every campus while cultivating relationships with employers in tech, finance, healthcare, hospitality, and the creative economy, among other growing industries. CUNY and SUNY have both received state funding to create apprenticeships—in the case of SUNY, $9 million over three years to create apprenticeships in advanced manufacturing and healthcare—but the state’s public college system should play a larger role in New York’s apprenticeship strategy. One obstacle is that current resources are largely tied to specific occupations and existing registered programs, which limits innovation. The state should empower CUNY and SUNY with the flexible funding required to take the lead in designing related instruction for apprenticeship programs in an array of fields, while collaborating with a broader range of employers.

Make it easier to create an apprenticeship program in New York State. A more approachable, better publicized registration process will ensure that employers aren’t turning to unregistered apprenticeship solely to avoid state bureaucracy. Employers shouldn’t have to call the Department of Labor to get the information they need. The website should include clear instructions for registering an apprenticeship, a timeline for the process, links to all necessary paperwork and other resources, and should explicitly appeal to non-building-trade employers. New York should also explore ways to streamline registration where possible: for instance, the Apprenticeship Council should consider holding some of its meetings to approve programs remotely. New York could also follow the lead of roughly half of all U.S. states, including Colorado and South Carolina, and simply use the federal registration process.

Support the development of high-quality unregistered programs. New York has room for many more high-quality unregistered apprenticeships, and some employers and intermediaries—especially in industries beyond the building trades—will prefer them for their speed and flexibility. The partnership developed between Per Scholas and Barclays demonstrates that unregistered programs can be rigorous, appealing to the employer and protective of the apprentice, and better suited for some industries than registered apprenticeship. New York State should encourage the growth and adaptation of these models to new industries and employers as another important pathway to increasing apprenticeship statewide.

Promote New York’s promising Empire State Apprenticeship Tax Credit, while designing other incentives to encourage apprenticeship in new fields. The Empire State Apprenticeship Tax Credit is a strong step forward for New York, and the state should continue investing in efforts to market this tax credit to employers in new industries. However, the cost savings of the tax credit is often more than offset by the expense of paying for the related instruction component of an apprenticeship program. In order to strengthen the appeal of this program—especially for smaller employers that may balk at the overall costs of setting up an apprenticeship—the state should consider subsidizing the cost of related instruction provided by community colleges or other quality training providers. This subsidy could be designed to target the first groups of employers to create apprenticeships in untested but fast-growing target industries for apprenticeship, like green energy and cybersecurity.

The Promise of Apprenticeships in New York is a publication of the Center for an Urban Future. Researched and written by Naomi Sharp and Eli Dvorkin. Edited by Eli Dvorkin and Jonathan Bowles. Additional research by Rayyan Sarker.

Apprenticeships on the Rise at New York Tech and Finance Firms

The Rise Of The Restaurant Robot