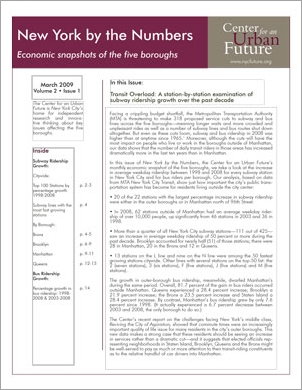 This edition of New York by the Numbers provides a station-by-station examination of the growth in subway ridership between 1998 and 2008 and a borough-by-borough analysis of bus ridership changes. It reveals that the largest gains in transit ridership occurred outside of Manhattan.

These Stops Are Rail Hot

Report: Most Subway Stops More Crowded Since ‘98, Some Ridiculously So

Public transportation growing rapidly across nation, including on Staten Island

Smith’s doomsday Dems: State Senate leaders must act to save the MTA

Hope on the Horizon?

Would You Stand on Planes for Cheaper Tickets?