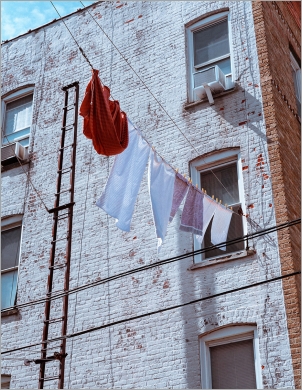 While coronavirus has devastated much of NYC's economy, our research shows that the impacts are not equally dispersed across the city: workers in the most hard-hit sectors—including restaurants, hotels, retail, and personal care services—predominantly live in lower-income neighborhoods outside Manhattan.

by Jonathan Bowles and Charles Shaviro

The coronavirus pandemic has brought the economy to a halt in neighborhoods throughout New York City, affecting cooks working at East Village restaurants, porters at Times Square hotels, cashiers at souvenir shops outside Yankee Stadium, and manicurists at nail salons in Brooklyn Heights. But a closer look at where New York’s workforce lives suggests that the economic devastation from this crisis has not been equally dispersed across the city. While fewer than 10 percent of residents on the Upper East Side and Park Slope work in the four industries where layoffs have been most prevalent—restaurants, hotels, retail, and personal care services—the share is 27 percent in Elmhurst, 25 percent in Corona, and 24 percent in Norwood, Highbridge, Sunset Park, and Flushing.1

In fact, while more than half of the jobs (51 percent) in these four hard-hit industries are physically located in Manhattan, 81 percent of the workers in these sectors live in the four other boroughs. As one example, 101,511 Bronx residents work in these fields, though the borough is home to barely half the jobs (51,183).

Overall, there are 13 neighborhoods (out of 55 Census-defined neighborhoods in the city) where at least 20 percent of the working residents are employed in these industries. Four are in the Bronx, four are in Queens, two are in Brooklyn, and two are in Northern Manhattan. In all 13 of the neighborhoods, at least 71 percent of the population is non-white. In 5 of the 13, at least 90 percent is non-white. And in 9 of the 13, at least 45 percent is foreign-born. In contrast, in each of the five neighborhoods with the lowest share of residents working in these four industries, the population is at least 64 percent white and no more than 25 percent foreign born. 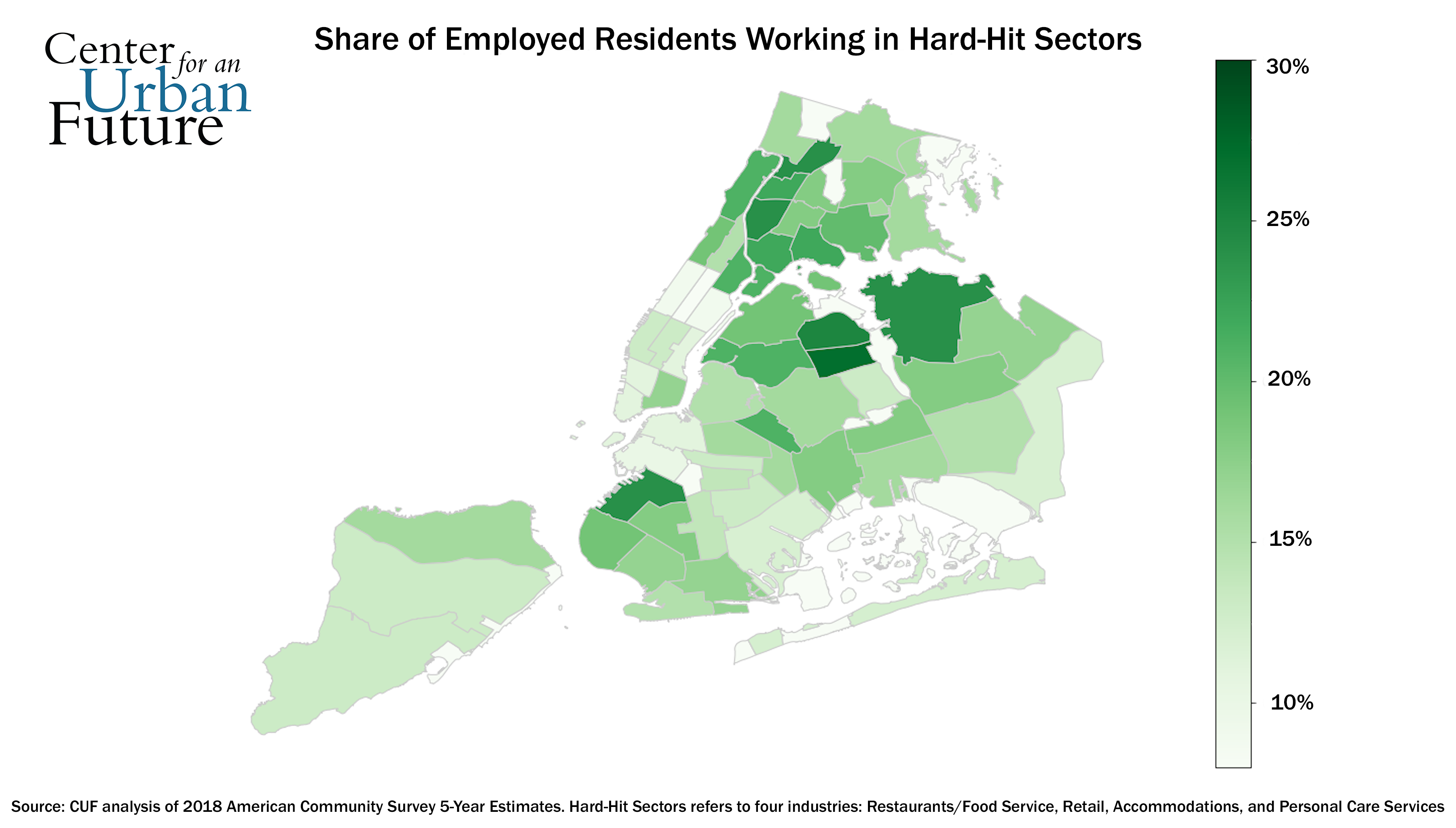 The 10 neighborhoods with the greatest share of residents employed in the four hard-hit industries are:

​The 10 neighborhoods with the lowest share of residents employed in the four hard-hit industries are: 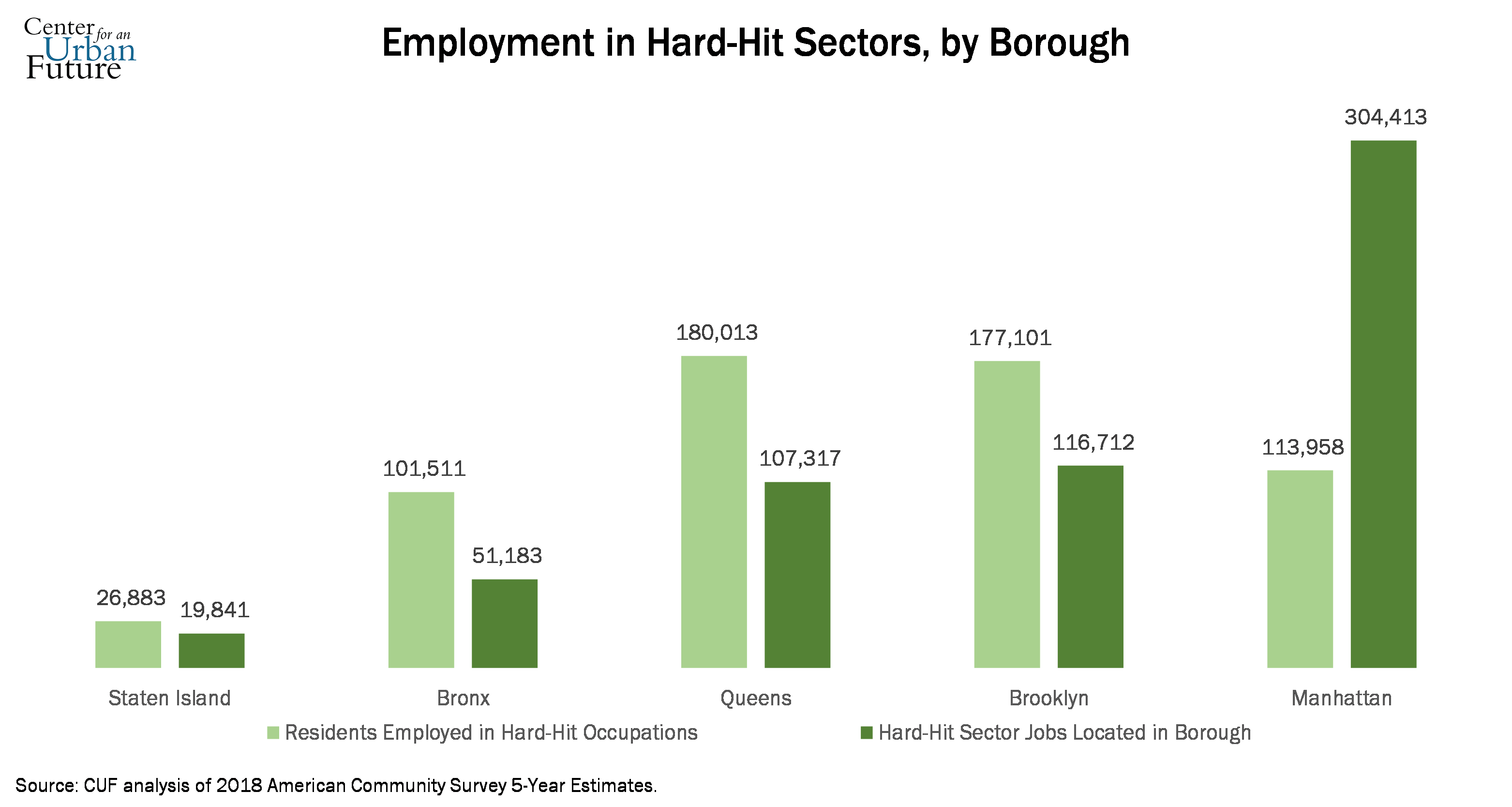 Our complete findings by neighborhood are included in interactive, sortable tables at the end of this report. 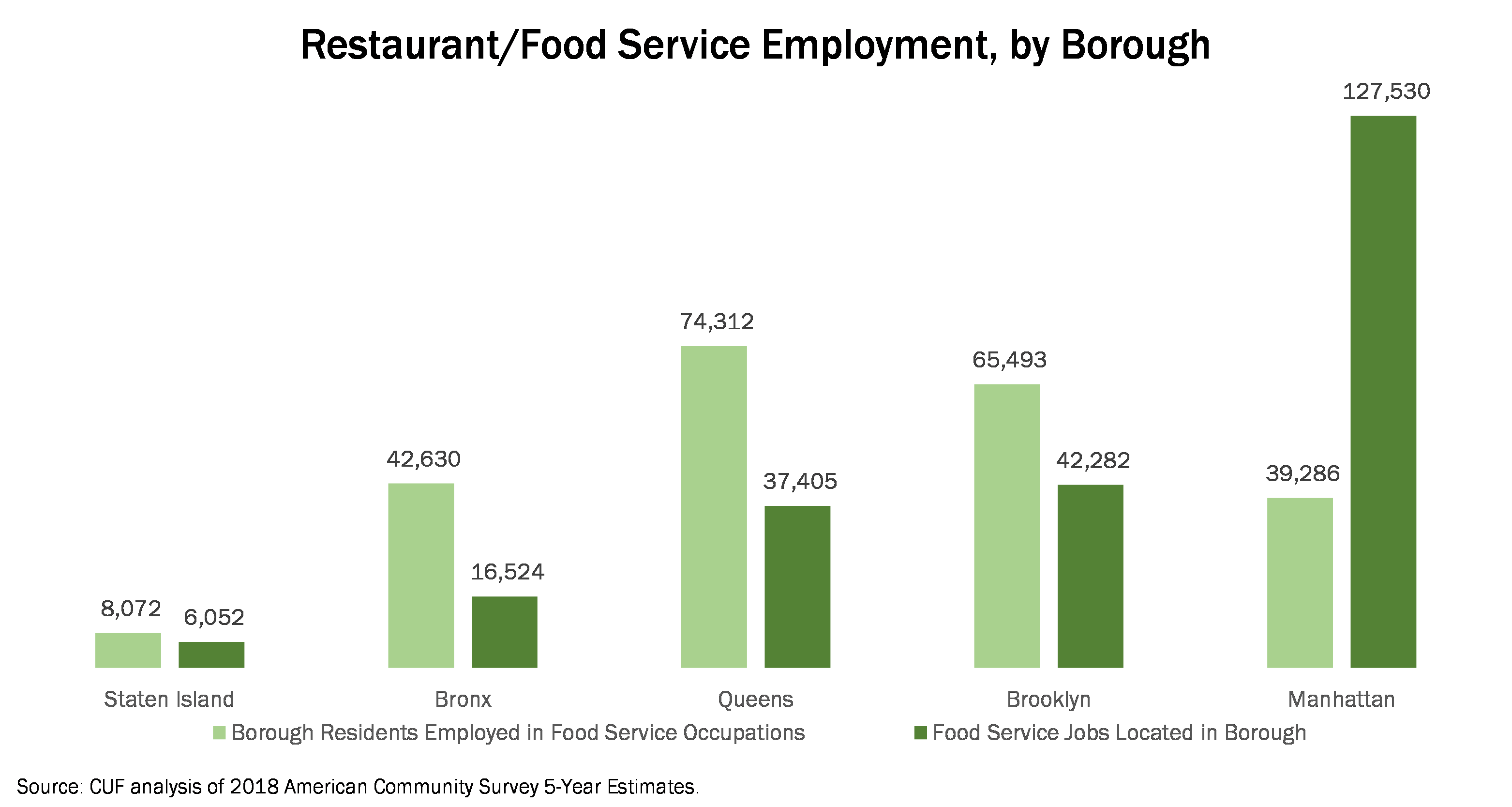 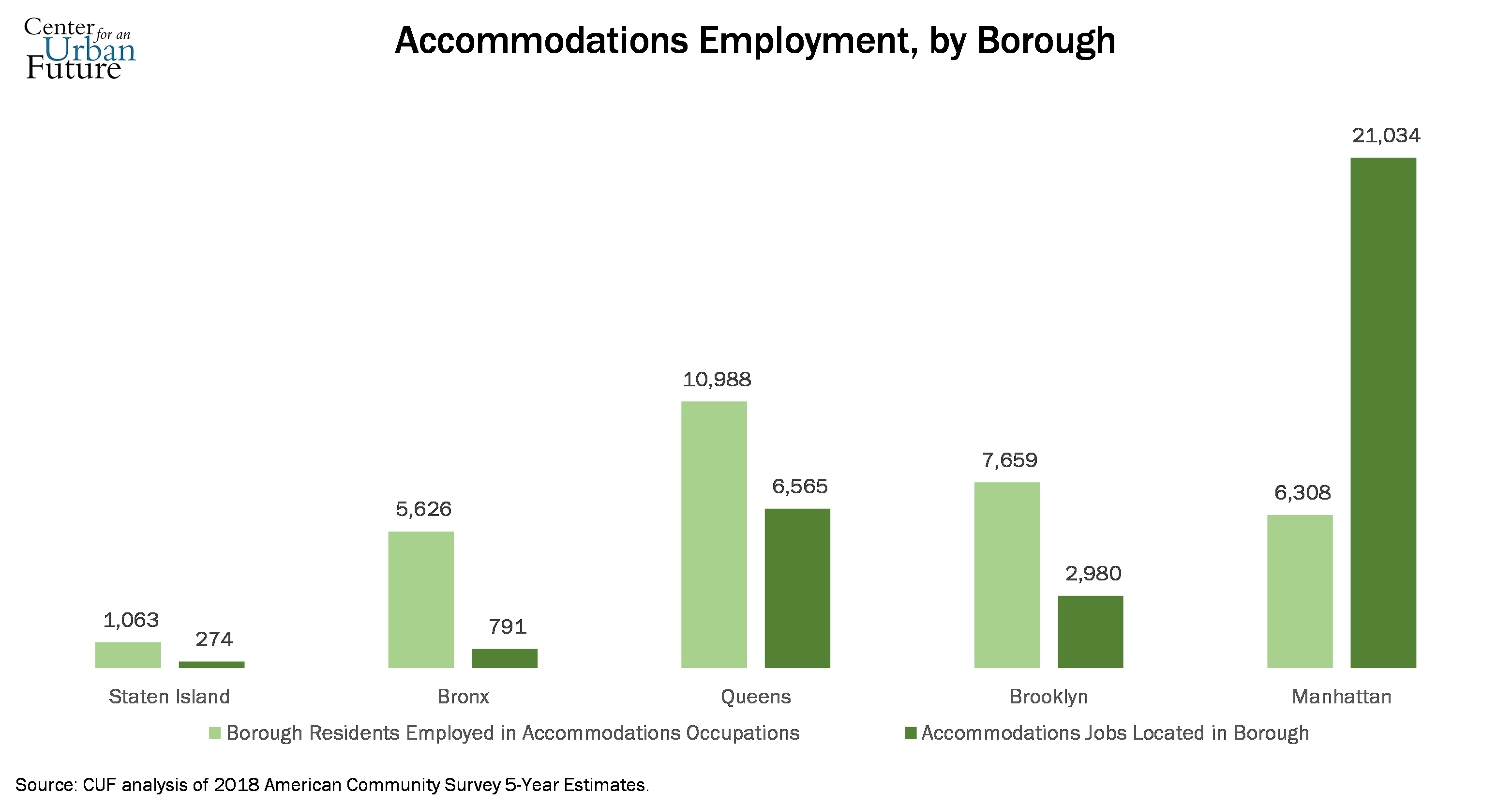 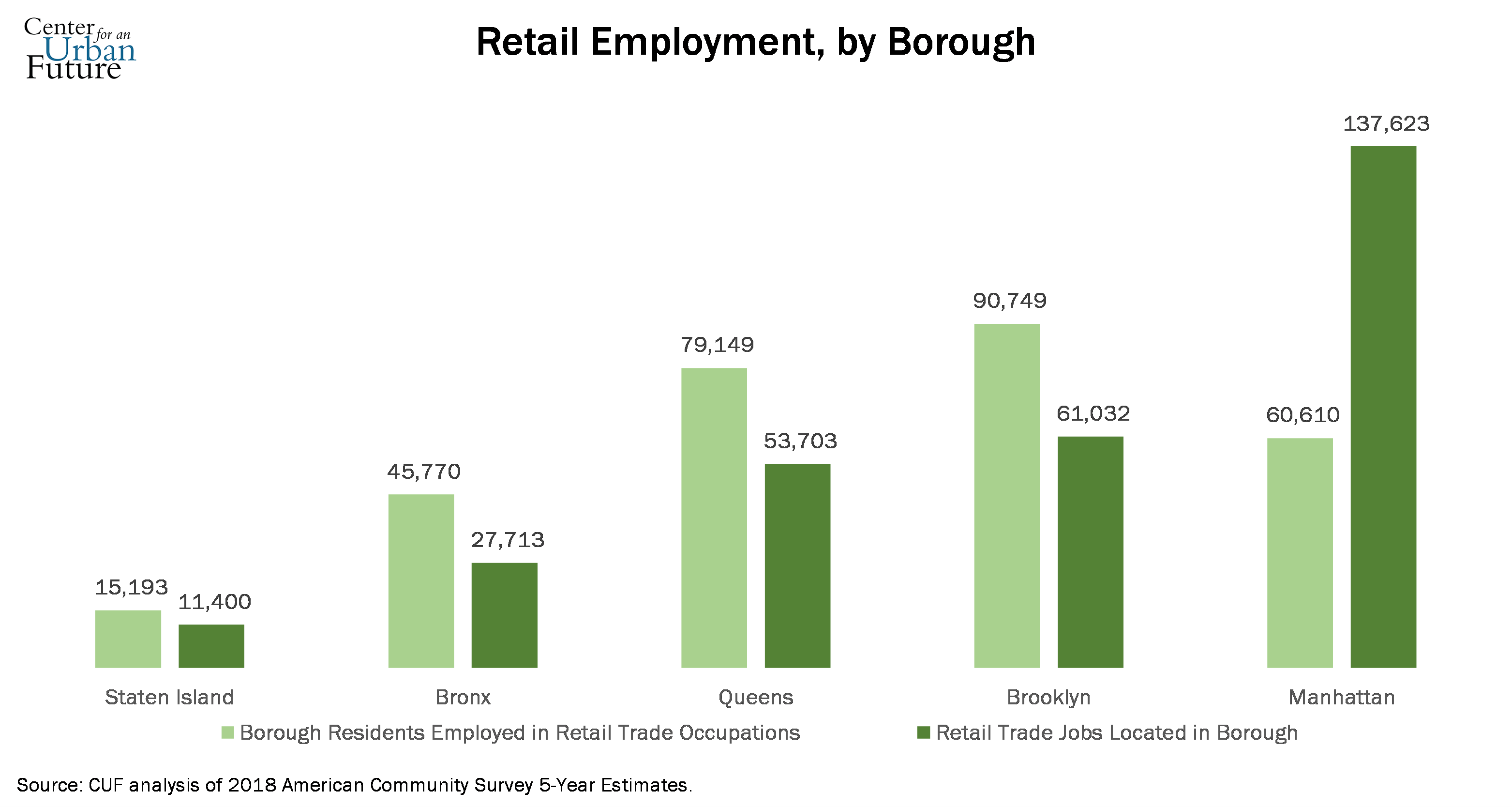 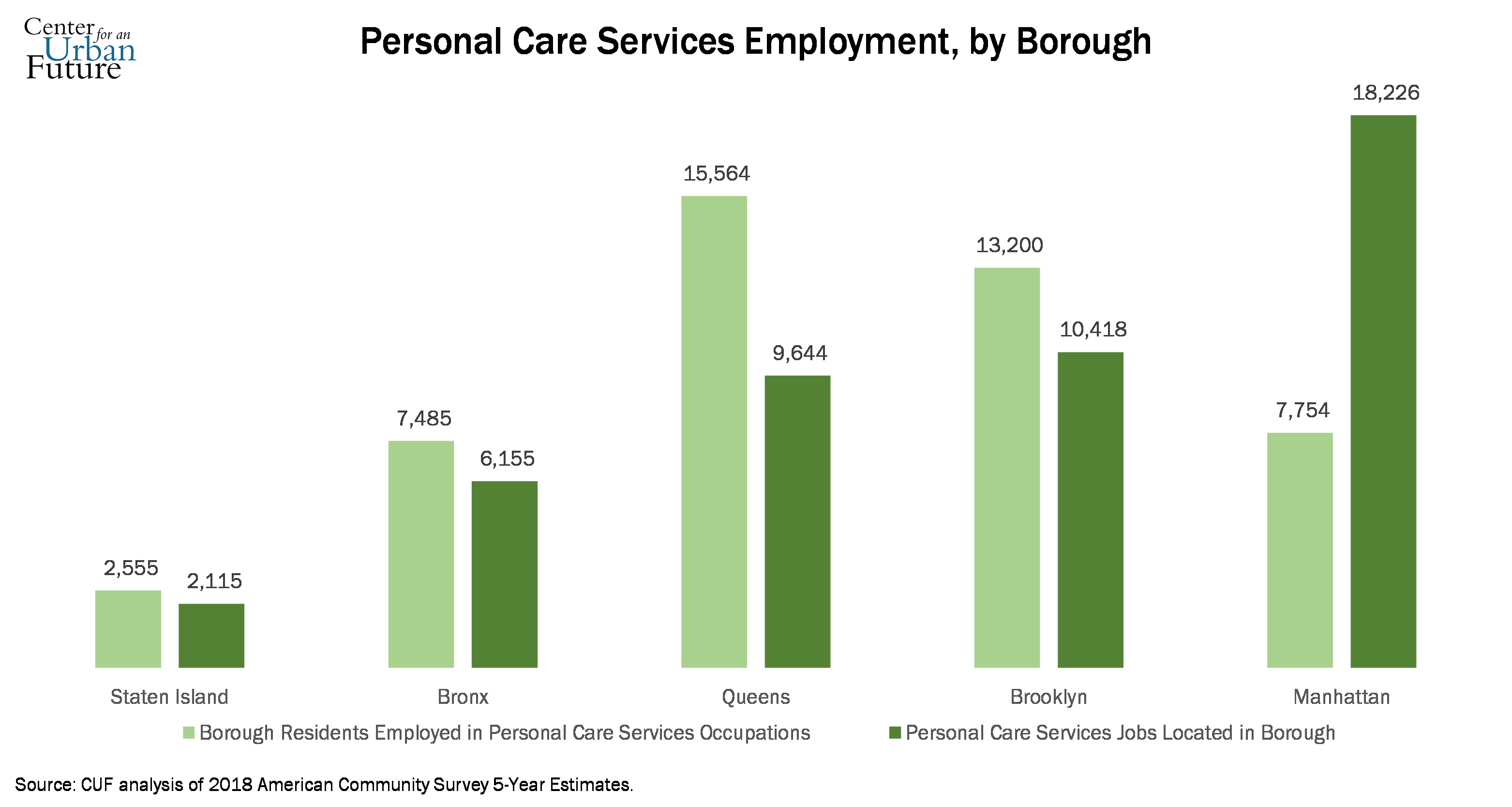 1. For this report, we conduct an analysis of occupation data from the U.S. Census Bureau's 2018 American Community Survey 5-Year Estimates, on the borough and neighborhood level, to assess where the city's hardest-hit workers in the restaurants, retail trade, accommodations, and personal care services industries live and work. We leverage the 2018 census occupational classification system in conjunction with the Census Bureau's Public Use Microdata Areas — which line up with the city's 59 community districts. Please note we use restaurants as shorthand for the “food services and drinking places” sector and hotels as shorthand for the accommodations sector.

The included occupations are as follows:

2. Citywide, 67.8 percent of the population is non-white and 38.6 percent is foreign born.

Photo by jurien huggins on Unsplash

‘No end in sight’: How NYC is dealing with the growing hunger crisis

Data Shows Norwood Among NYC Areas Most Impacted by Pandemic

First-Of-Its-Kind Vaccine Bus On Its Way To Brooklyn, Mayor Says

‘I chose to keep going’: Resilience of New York workers tested by pandemic