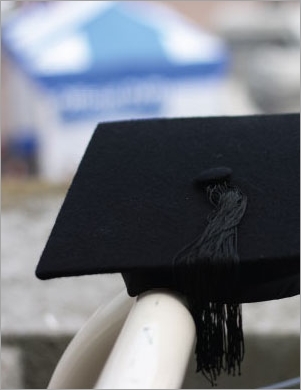 Video - A Door to Opportunity

At a time when the economy is producing few decent-paying jobs for those without a college degree, our January 12, 2016 symposium explored what state policymakers can do to improve the outcomes for community college students throughout New York.

The forum, which was generously funded by the Working Poor Families Project and the Lumina Foundation, built on a recent Center for an Urban Future report that unpacked one  reason why many community college students drop out—the lack of financial aid for part-time students. Titled Tapped Out, the study revealed that part-time students now account for 42 percent of those enrolled at SUNY and CUNY community colleges. Yet, in 2013, less than one percent of the nearly 150,000 part-time enrollees at New York's 36 public community colleges received financial aid through the state's Tuition Assistance Program (TAP). Our event explored this college completion barrier, as well as other ways to improve the graduation outcomes of non-traditional community college students throughout the state.

This event was generously sponsored by the Working Poor Families Project and the Lumina Foundation.

The event began with welcoming remarks from NYATEP’s Melinda Mack and Center for an Urban Future’s Jonathan Bowles.

The panel discussion focused on the needs of part-time students, who are–almost by definition–adult and non-traditional students. “Our financial aid system is a product of the time in which it was initiated,” said Jay Quaintance, Governor Cuomo’s higher education advisor. “But the way students experience college has considerably changed in that time period. That lag is the focus of what we’re talking about.” He cited as an example that 30 percent of SUNY students are transfer students. David Gomez noted that most students at CUNY Hostos Community College are over age 22, and many are working or raising families. “I was a pretty good student,” said Gomez. “But I could not do what we are asking our students to do: support a family, sometimes an extended family, go to school full-time, and do all this on $10,000 a year. Some people can’t find a parking space for that amount of money!” Panelists pointed out that the onus is on colleges to make services that are both valuable and accessible to adult students. “We see students reacting to policy, rather than policy reacting to the needs of students,” said Merodie Hancock. “That’s unfortunate.” Community colleges play an especially important role for low-income adult and non-traditional students. More than half of all Hispanic high school graduates who attend college are at community colleges, according to Lisette Nieves.

Many adult students study part-time, and the panel explored how TAP could better meet their needs. At present, only 1 percent of part-time students receive assistance through the program. Assembly Member Deborah Glick argued that TAP’s “trap door” is its requirement for students to complete two consecutive, full-time semesters before being eligible for aid. Panelists also noted that limiting TAP eligibility to six semesters penalizes the many community college students that need to take remedial classes. In addition, TAP and Pell are both unavailable in the summer semester. Hancock argued that stopping financial aid in May forces non-traditional students to conform to a traditional schedule that often fails to meet their needs. “The spring and fall semester is our creation, not the student’s creation,” she noted.

Panelists expressed enthusiasm for strategies at both the institutional and policy level that could help part-time students. Hancock suggested that colleges can provide onsite daycare, schedule weekend classes and have deans available in the evenings to work with students who are only available outside of working hours. Meanwhile, Susan Mead of SUNY Dutchess Community College recommended that credentials and credit hours should be stackable across institutions, not only from one college to another but also from workforce training programs to colleges.

At the policy level, panelists generally agreed that government should focus on the end goal which is to help students overcome barriers that keep them from completing college. A clear starting point would be to abolish the two consecutive, full-time semester rule for TAP eligibility. There was also discussion about expanding TAP eligibility to summer semester students; and Assembly Member Glick suggested reviewing the income threshold and maximum grant limits for independent students, which are less generous than those for dependent students living with family. Finally, there was considerable discussion during the audience Q&A about how to more effectively connect community colleges to employers and the workforce development system, so as to better meet the needs of students preparing for careers.

For 20 years, the Center has documented the powerful connection between higher education, workforce training and economic mobility in New York. From our 1999 report on CUNY’s potential as an economic development powerhouse to our 2014 policy brief on expanding tuition assistance for part-time students, our research continually highlights how to make New York’s higher education system more accessible and effective in creating pathways to the middle class.

Most recently, we published a commentary with six concrete and affordable ways that Governor Cuomo and the State legislature can expand economic opportunity in 2016. Last year, we published a commentary on enhancing CUNY’s role as a workforce development provider, exploring what can be done to transform CUNY community colleges into engines of economic mobility and high-volume source of workforce talent for city employers. And with 1.6 million adults in New York lacking a high school diploma, we published another commentary in 2015 explaining how New York State should make a bold new commitment to strengthen its adult education system.