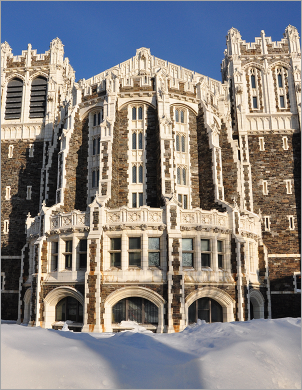 Earlier this month, State Senator Luis Sepulveda introduced a bill to boost state funding for New York state’s most effective college completion initiative, CUNY ASAP. The bill, inspired in part by the Center for an Urban Future’s research, would provide $141 million to expand CUNY ASAP to thousands of students throughout the CUNY system. Participating in CUNY ASAP has been shown to more than double a student’s chance of graduating on time with an associate degree.

Expanding CUNY ASAP was a key recommendation in Degrees of Difficulty, a 2017 CUF report, which called attention to the urgent need to boost college completion rates in New York City. Only 22 percent of CUNY community college students graduate with an associate degree after three years, and only 54 percent of senior college students graduate with a bachelor’s degree after six years. The most cost-effective response would be to expand CUNY ASAP, a program that has already been tested and proven effective through a rigorous independent evaluation.

“The Governor and State Legislature should develop a funding source that would make ASAP a universal program at CUNY,” argued Degrees of Difficulty. In addition, the study proposed expansion of a bachelor’s degree version of ASAP called ACE, noting that “the benefit to the city’s economy and CUNY’s degree production would far outweigh the costs.” The Center supported Degrees of Difficulty with presentations to members of the State Legislature, who were enthusiastic about strengthening student success at CUNY colleges.

CUF has published extensively on college completion at CUNY and throughout the state. Other key studies include Mobility Makers, Completion Day, Struggling to the Finish Line and Tapped Out. Recent op-eds include New York Students Need More than Free Tuition in the Albany Times-Union and NY Should Make College Free – and Help Students Graduate From It in City Limits.