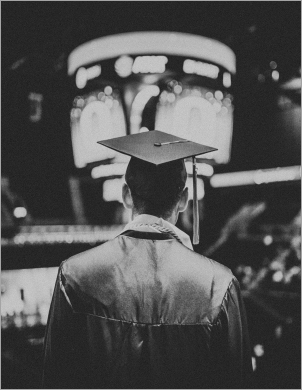 While a college credential has become the single most important platform for the middle class today, only one in four New York State residents who enroll in the state’s community colleges end up earning a degree.

Our report finds cause for concern, but also hope:

Three-year graduation rates have risen at most colleges, led by gains in the CUNY system. But some schools have slipped.

More than half of all SUNY community colleges saw six-year graduation rates fall.

Note on methodology. Outcomes data on CUNY community colleges is based on administrative data posted to the CUNY Office of Institutional Research and Assessment website. Outcomes data on SUNY community colleges was provided by the SUNY Office of Institutional Research and Data Analytics. The completion rates are for matriculated first-time, full-time, associate degree-seeking students in the fall semester of each year who earn an associate or baccalaureate degree within the given reporting period. These rates are reported at the systems level, meaning that a student who transfers from one college to another college in the same system is reported as a graduate. Students who transfer out of the system altogether are not reported here, although some such students will in fact graduate from non-CUNY or non-SUNY colleges. 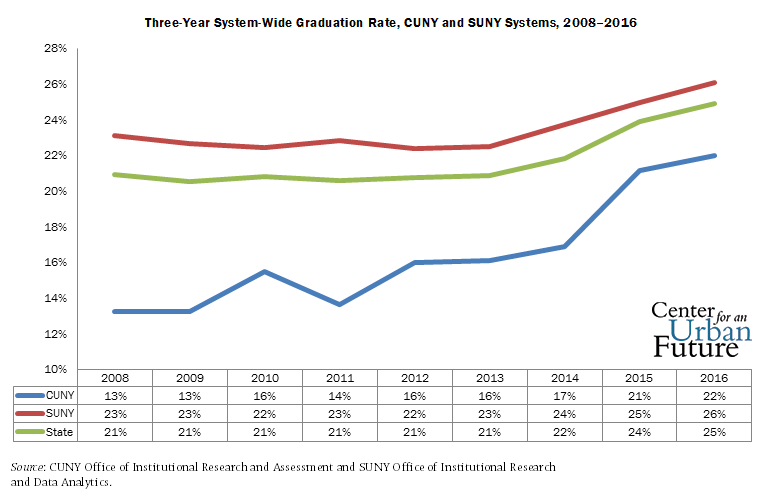 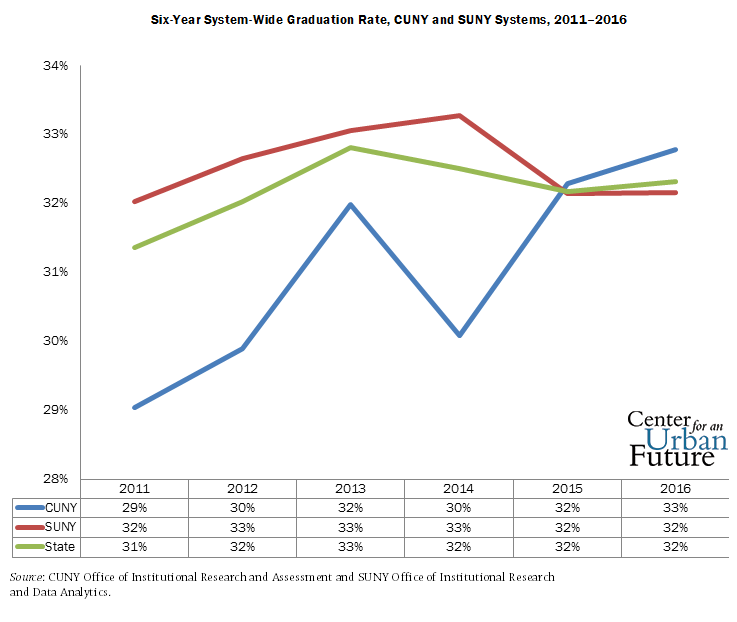 Community college enrollment is up statewide, but many colleges lost students. 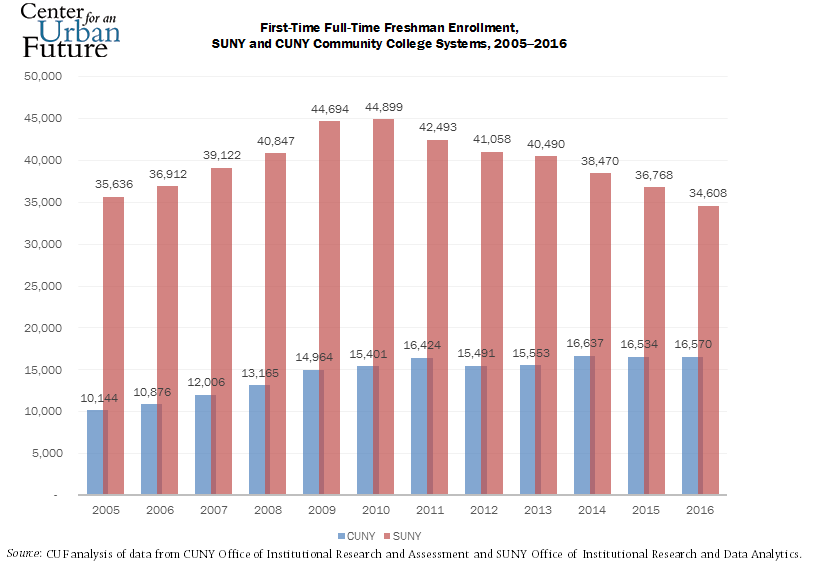 The distressingly low graduation rate across all community colleges in New York is a tragedy for thousands of students each year who leave college without a credential. In today’s economy, a college credential has become an indispensable requirement for most well-paying jobs—and New Yorkers who lack one are at an enormous disadvantage. Of equal concern is the impact on private employers, who are deprived of skilled job applicants, and on the state’s regional labor markets, which lose a vital impetus to economic prosperity.

Though today’s economy increasingly requires workers to have a college credential, more than 7.6 million residents in the state over age 25—57 percent of the state’s 25-plus population—lack an associate’s degree or higher level of college attainment. According to data from the Working Poor Families Project, this includes more than 1.3 million New Yorkers who have at least some postsecondary education, but left college without a degree.3

To give more New Yorkers a path to the middle class and strengthen the state’s economy, Governor Cuomo, the State Legislature, and education officials at SUNY and CUNY need to take bold steps to help more New Yorkers succeed at community colleges. To accomplish this goal, Governor Cuomo and the Legislature should create a New York State Student Success Fund: a new pool of money that would empower SUNY and CUNY to implement and expand a host of student success initiatives. These initiatives should include increasing the number of college advisors and nonacademic support staff, designing corequisite instruction models that bypass developmental education, creating emergency microgrants to keep students from dropping out due to sudden crises, and expanding the successful ASAP initiative—both within CUNY and to SUNY campuses.

The state and the college systems should also implement initiatives that, unlike ASAP, can benefit the thousands of part-time community college students. These measures should include removing the barriers that limit access to tuition assistance aid for part-time students, making non-credit courses stackable toward college degree, providing college credit for prior learning outside the college setting, and designing more programs, credentials, and schedules that meet the needs of working students.

The data also reveals an important pattern that should inform policymaking in the state: the CUNY system has engineered a forceful improvement of graduation outcomes across virtually all of its community colleges, proving that progress is possible. If CUNY’s student success initiatives are fully funded and supported, these gains are likely to continue.

On the SUNY side, the need for more systemic strategies to boosting college completion is clear. Where CUNY’s greatest challenge is the concentrated poverty of its student population, SUNY’s is in its far-flung geography and diverse institutional cultures. It is difficult to bring about systems-level change in a network of 30 community colleges that runs the gamut of urban, suburban, and rural economies—sometimes all within the same institution.

SUNY is taking steps to address student success issues within this decentralized framework. In 2015, for example, SUNY implemented Seamless Transfer Policies to create transfer paths across the entire SUNY system. These paths enable students to transfer from a community college to a senior college without losing credits in general education or in the student major. SUNY also made provisions for the assessment and evaluation of its transfer paths, which should enable further improvement over time.

Further accelerating development of coordinated student success strategies would benefit students at SUNY’s community colleges, and could result in gains across New York State that mirror the promising improvements in the CUNY system.

For more on this topic, check out:

This brief is funded by the Working Poor Families Project, a national initiative supported by the Annie E. Casey and Joyce Foundations, which partners with nonprofit organizations in 23 states to investigate policies that could better prepare working families for a more secure economic future, and The Clark Foundation.

Researched and written by Tom Hilliard. Edited by Eli Dvorkin.

Study: Only 26 percent of community college students in Finger Lakes graduate in 3 years

Graduation rate at CSI lags behind Wagner and St. John’s

Just 25% of CNY Community College Students Graduate in 3 years, but That’s not the Whole Story

This brief is funded by the Working Poor Families Project, a national initiative supported by the Annie E. Casey and Joyce Foundations, which partners with nonprofit organizations in 23 states to investigate policies that could better prepare working families for a more secure economic future, and The Clark Foundation.