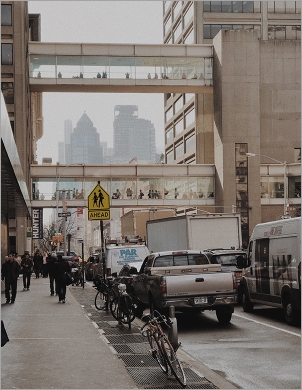 Part of our ongoing research on how to create a more inclusive economy in NYC, this data brief shows that CUNY has made crucial progress in producing STEM grads. Tapping this talent pool, and making further gains in the years ahead, will be key to closing the opportunity gap for tech careers.

For New York City to make significantly more progress helping New Yorkers from lower-income, diverse backgrounds to access technology careers, the City University of New York (CUNY) will need to play an increasingly important role. While the city is home to a number of workforce training programs that prepare New Yorkers for the well-paying jobs in the tech sector, CUNY is uniquely well-positioned to address the tech opportunity gap at the necessary scale.

This new analysis shows that CUNY is already making crucial progress, with the total number of degrees in science, technology, engineering, and math (STEM) granted annually nearly doubling over the past 10 years—rising by 93 percent, from 4,671 in 2009-10 to 9,013 in 2018-19. The total number of CUNY STEM graduates has shot up across every demographic group, and increased at 19 of CUNY’s 20 campuses that grant STEM degrees.

However, this report finds that progress is still needed, particularly in the most in-demand degree programs. While Black and Hispanic students account for 55 percent of all students enrolled at CUNY, they received just 31 percent of computer science degrees in 2018-19. At the same time, just 19 percent of computer science degrees at CUNY were awarded to women, even though women comprise 58 percent of CUNY’s overall student population. When gender and ethnicity are considered, even starker disparities emerge: despite making up 18 percent of the CUNY student body, Hispanic women received just 7 percent of all STEM degrees and only 4 percent of degrees in technology—the lowest shares of any demographic group.

Overall, we find that the number of STEM degrees granted by CUNY colleges has grown tremendously in recent years, with major gains for Black and Hispanic students and women, and notable increases at both senior and community colleges. Today, CUNY is graduating nearly 10,000 students annually with STEM degrees—a major milestone for the city’s higher education system and an indicator that thousands more New Yorkers from lower-income backgrounds are being prepared for the jobs and industries that are poised to lead the city’s economic recovery.

Significant growth in STEM graduates is taking place at nearly every campus in the CUNY system. The number of community college STEM graduates has increased 31 percent over the past four years, from 1,739 to 2,275, and the ranks of senior college STEM graduates have risen 35 percent, from 5,008 to 6,738. In fact, 19 of the 20 STEM-degree-granting CUNY schools have increased their STEM graduates since 2015-16, the first year that data on degrees granted by major/college was made available (the one exception is Kingsborough Community College, which saw a 6 percent decrease). 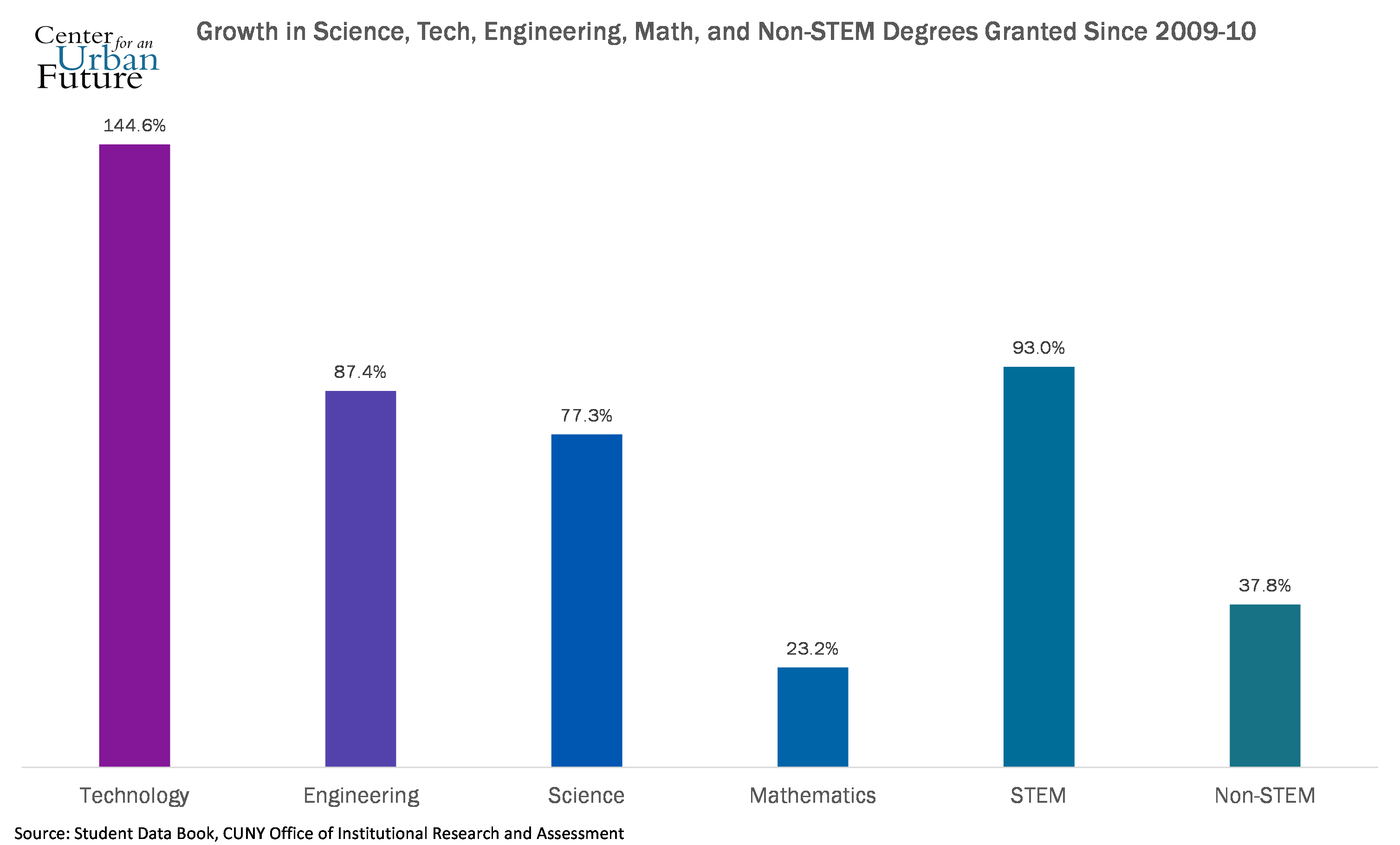 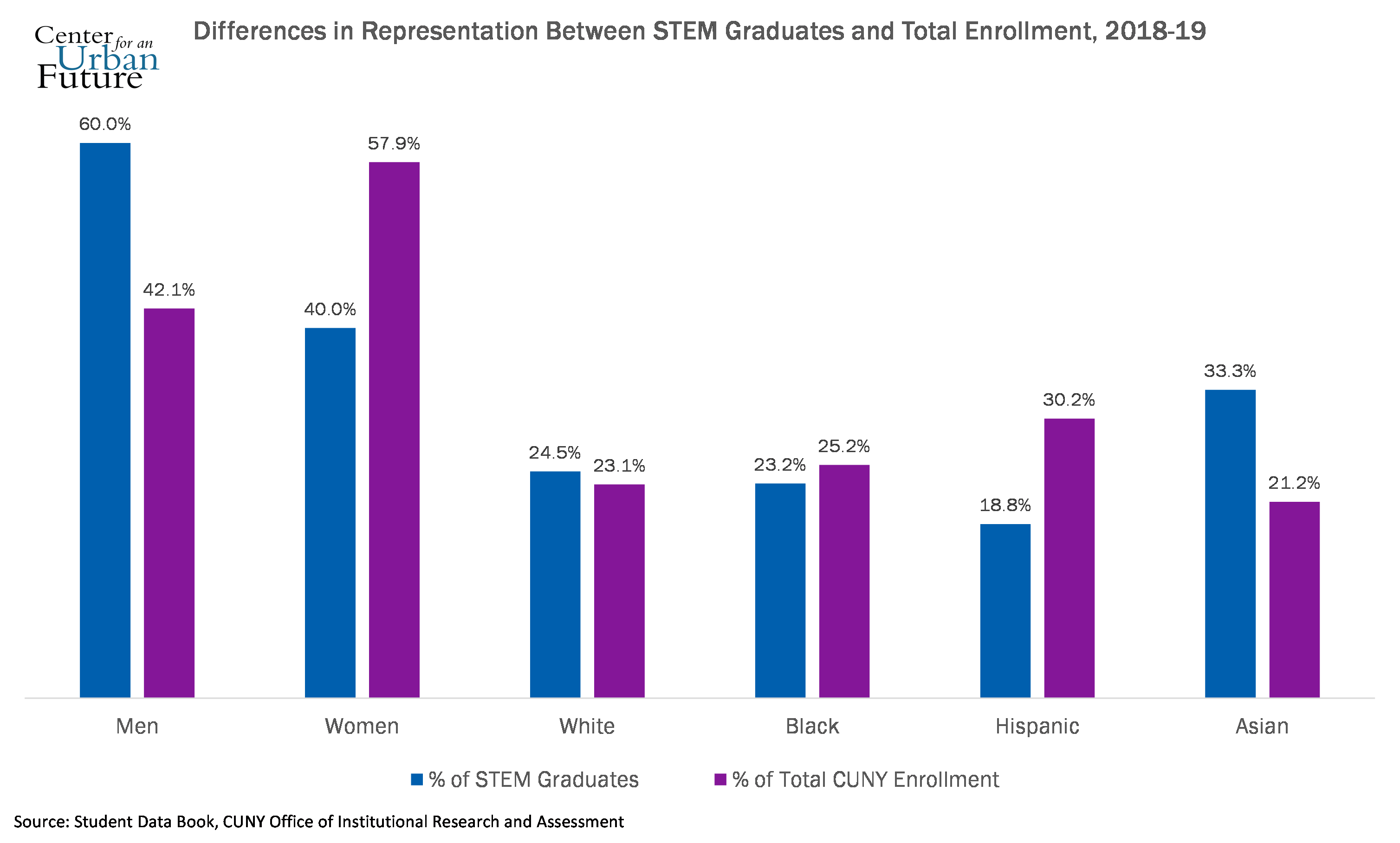 From Bronx Community College to the College of Staten Island, the growth of STEM is opening important new pathways into the companies and industries—including tech, healthcare, and engineering—driving much of the city’s high-wage job growth and expanding access into these careers for thousands of students from lower-income communities. To build on this important progress city and state policymakers and CUNY leaders should take steps to continue these trends and ensure that every CUNY college is making strides. At the same time, more work needs to be done to close the access and opportunity gaps for those students, especially Hispanic students and women, who remain significantly underrepresented among STEM graduates.

There are numerous factors that contribute to differences in representation between STEM graduates and overall CUNY enrollment. But there are concrete steps that the city can take to continue to bolster STEM enrollment and degree attainment among students from lower-income, diverse backgrounds.

This report, which is based on the most recently available data from CUNY’s Office of Institutional Research, includes the following key findings:

Over the past decade, the number of CUNY STEM graduates annually has nearly doubled. 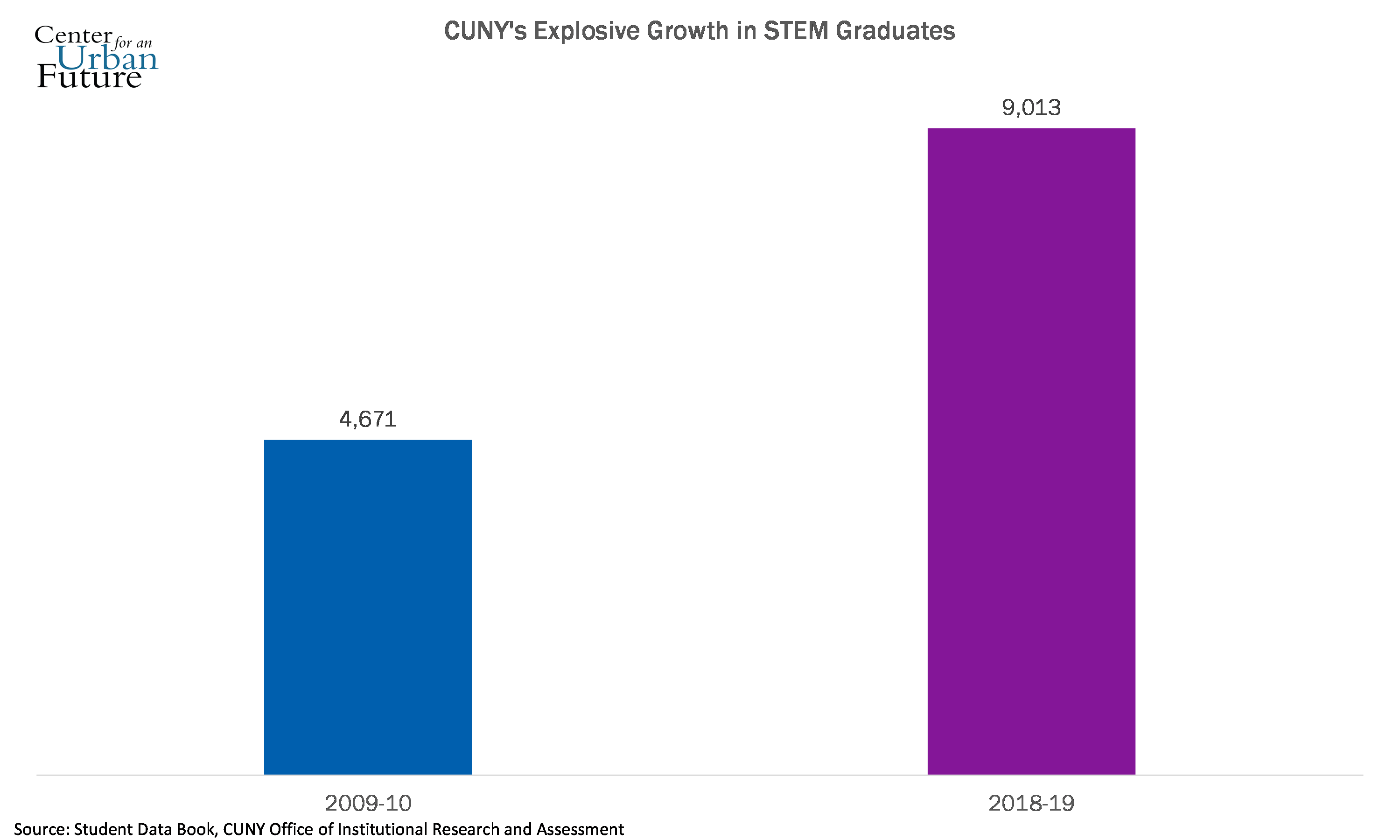 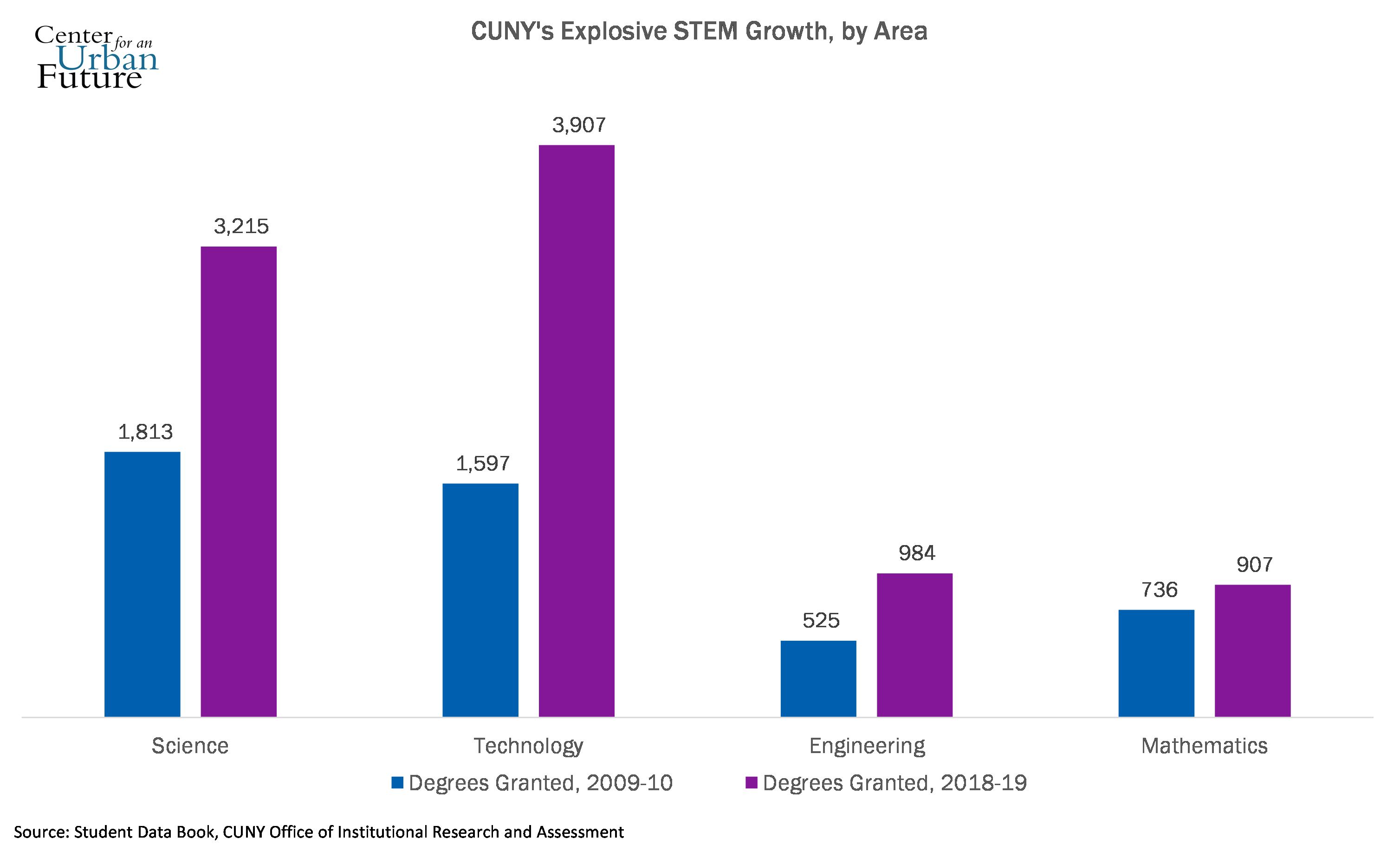 STEM degree attainment has increased across every demographic group at CUNY, with the greatest increases recorded by Asian students. 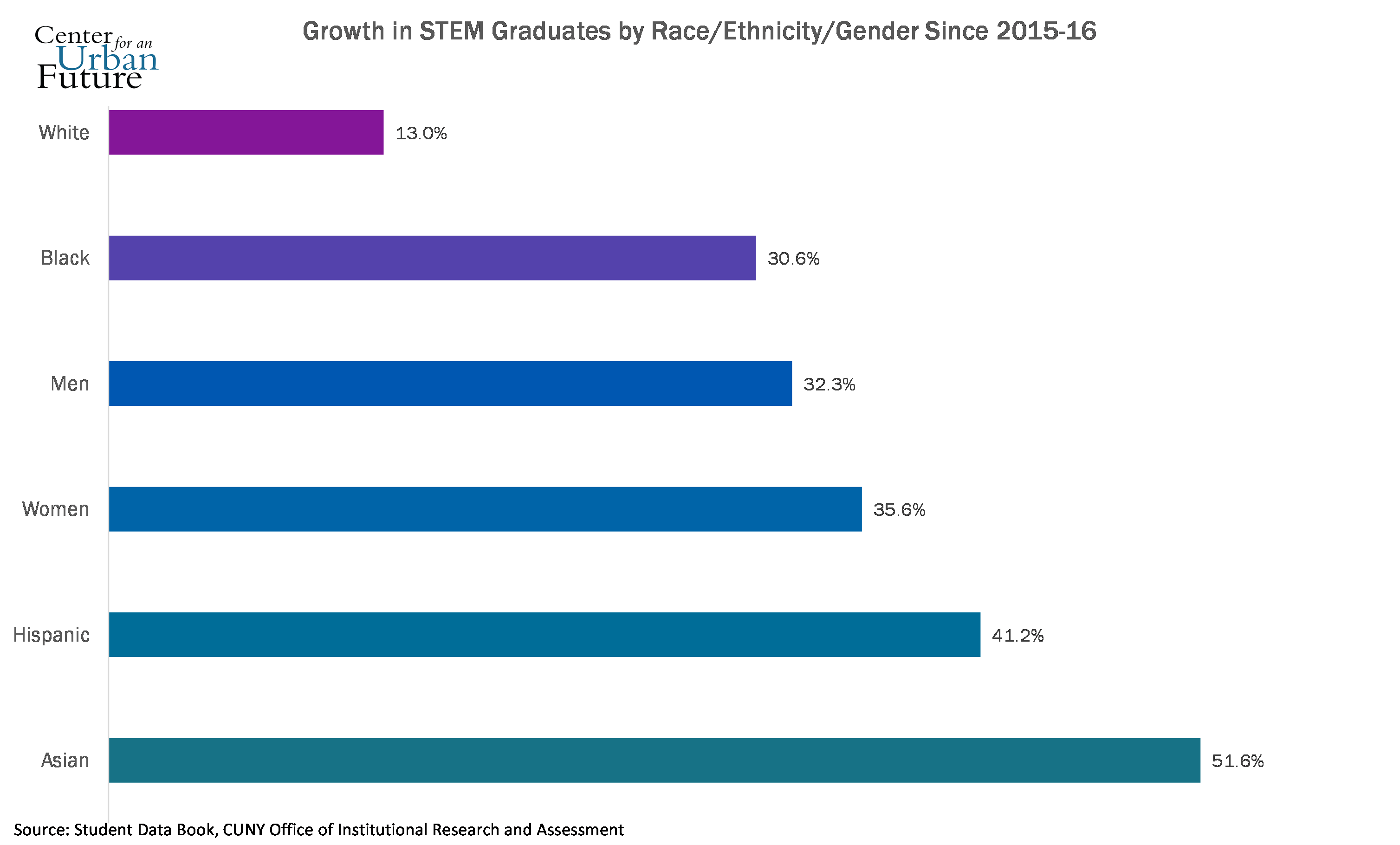 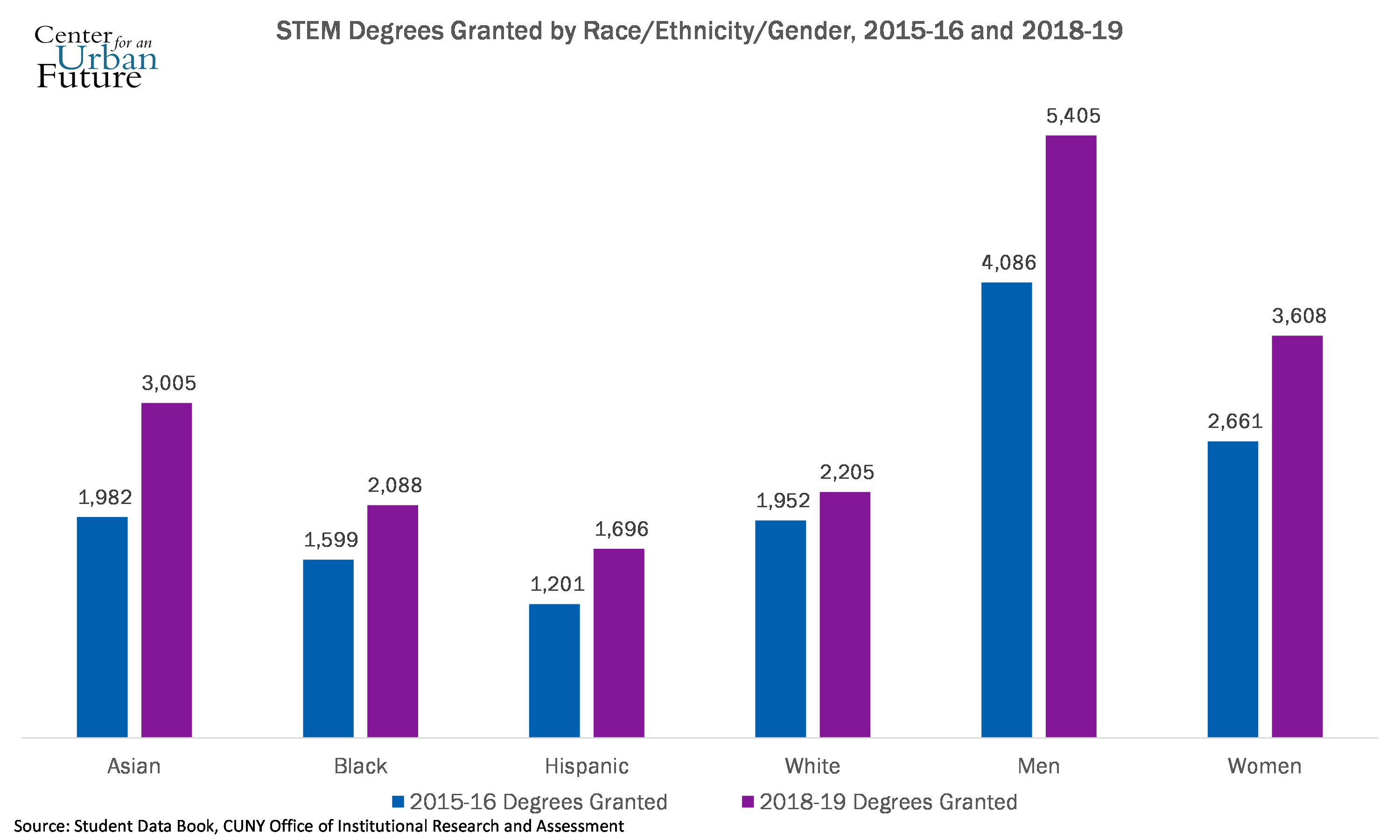 19 of the 20 STEM-degree-granting CUNY campuses are producing more STEM graduates since 2016, although a few campuses are driving the overall increase. 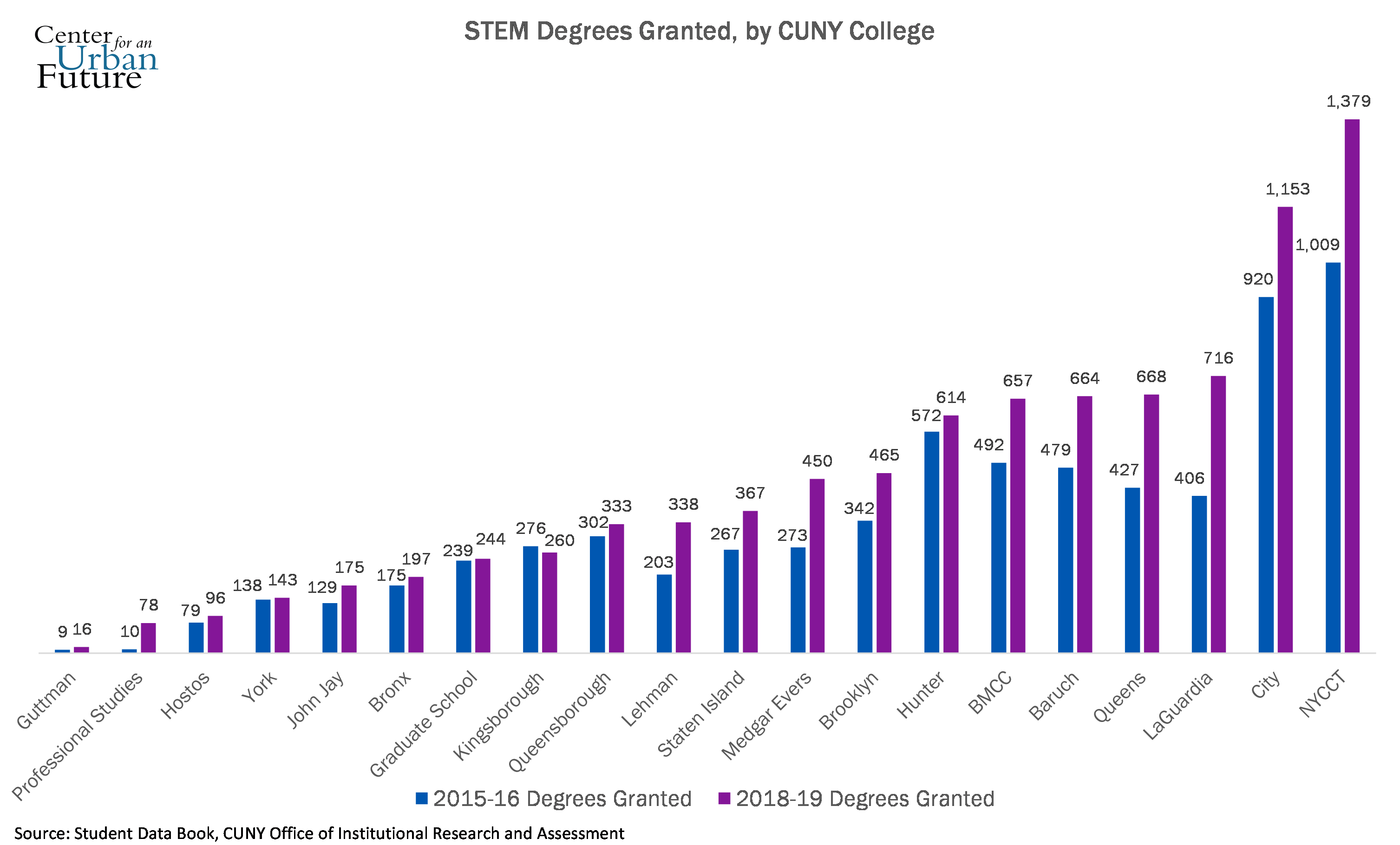 All four STEM disciplines are growing, led by technology degrees.

STEM degree attainment by women has grown significantly but is still disproportionately low across many disciplines.

While nearly every college has seen growth in STEM graduates, several community colleges are lagging behind.

Over the past decade, CUNY has made significant progress in expanding the number of students who earn a STEM degree. Nearly 10,000 students annually are graduating with a degree in science, technology, engineering, or math—opening pathways into some of the most promising careers in New York City’s fastest-growing industries for thousands of students from lower-income backgrounds. But there remains much work to be done to increase the representation of Hispanic, Black, and women students among STEM graduates and to ensure that the striking gains made by a handful of colleges can extend across the entire system. To do so, CUNY will need sustained support from city and state policymakers, business leaders, and leaders in the K-12 system to ensure that even more New Yorkers of all backgrounds can gain the educational credentials and skills needed to access careers in tech, engineering, healthcare, and other industries poised for long-term growth.

BNY Mellon is a global investments company dedicated to helping its clients manage and service their financial assets throughout the investment lifecycle. Whether providing financial services for institutions, corporations or individual investors, BNY Mellon delivers informed investment and wealth management and investment services in 35 countries.  As of June 30, 2020, BNY Mellon had $37.3 trillion in assets under custody and/or administration, and $2.0 trillion in assets under management. BNY Mellon can act as a single point of contact for clients looking to create, trade, hold, manage, service, distribute or restructure investments. BNY Mellon is the corporate brand of The Bank of New York Mellon Corporation (NYSE: BK). Additional information is available on www.bnymellon.com. Follow BNY Mellon on Twitter @BNYMellon or visit their newsroom at www.bnymellon.com/newsroom for the latest company news.

Funding for this report was generously provided by BNY Mellon. General operating support for the Center for an Urban Future has been provided by The Clark Foundation and the Bernard F. and Alva B. Gimbel Foundation.