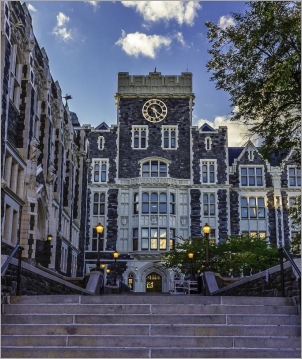 The newly launched CUNY Reconnect initiative was directly inspired by a January 2022 CUF report, which urged city officials to help re-enroll adult New Yorkers who earned some college credits but left school before completing a degree.

Research published earlier this year by the Center for an Urban Future (CUF) has now sparked a major new city initiative to re-enroll 10,000 New Yorkers who earned some college credits but left school before completing a degree.

The CUNY Reconnect program was launched on August 30, 2022 by the City University of New York (CUNY) after advocacy from City Council Speaker Adrienne Adams. The press release announcing the new initiative noted that it “was inspired by a report issued in January by the Center for an Urban Future, which highlighted a similar program in Tennessee that could be modeled to reach hundreds of thousands of New Yorkers of working age.” A New York Daily News article pointed out that the idea for the program “came from a paper by the Center for an Urban Future, which last year estimated that nearly 700,000 working-age New York City residents had completed some college classes without graduating — a group that’s disproportionately Black, Hispanic and female.”

Speaker Adams first proposed the CUNY Reconnect program in March during a speech at the Association for a Better New York (ABNY), where she announced her “support for a CUNY Reconnect Initiative, based on the important research by the Center for an Urban Future.” The Speaker and the City Council then secured $4.4 million in the FY2023 city budget for the program. It will begin as a pilot with the goal of enrolling 10,000 returning students, employing a team of “navigators” to contact former students, encourage them to re-enroll, and provide individualized guidance for enrolling in the degree or certificate program that best meets their needs.

In a press release announcing the program, CUF Executive Director Jonathan Bowles says, “This is such an important step to creating a more equitable economy in New York. By helping adults who have some college credits but no degree to return to CUNY and complete a credential, it will enable thousands of mostly low-income New Yorkers to get on the path to better jobs and a more financially secure life. We applaud Speaker Adams for making this happen.”