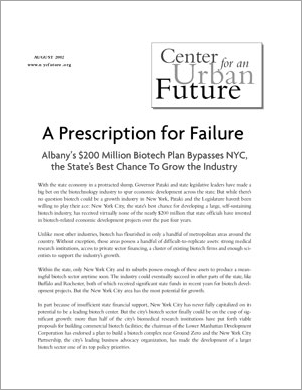 A Prescription for Failure

This report on biotechnology in New York shows how Albany's $200 million biotech plan bypasses New York City, where the state has its best chance to grow the industry.

With the state economy in a protracted slump, Governor Pataki and state legislative leaders have made a big bet on the biotechnology industry to spur economic development across the state. But while there’s no question biotech could be a growth industry in New York, Pataki and the Legislature haven’t been willing to play their ace: New York City, the state’s best chance for developing a large, self-sustaining biotech industry, has received virtually none of the nearly $200 million that state officials have invested in biotech-related economic development projects over the past four years.

Unlike most other industries, biotech has flourished in only a handful of metropolitan areas around the country. Without exception, those areas possess a handful of difficult-to-replicate assets: strong medical research institutions, access to private sector financing, a cluster of existing biotech firms and enough scientists to support the industry’s growth.

Within the state, only New York City and its suburbs possess enough of these assets to produce a meaningful biotech sector anytime soon. The industry could eventually succeed in other parts of the state, like Buffalo and Rochester, both of which received significant state funds in recent years for biotech development projects. But the New York City area has the most potential for growth.

In part because of insufficient state financial support, New York City has never fully capitalized on its potential to be a leading biotech center. But the city’s biotech sector finally could be on the cusp of significant growth: more than half of the city’s biomedical research institutions have put forth viable proposals for building commercial biotech facilities; the chairman of the Lower Manhattan Development Corporation has endorsed a plan to build a biotech complex near Ground Zero and the New York City Partnership, the city’s leading business advocacy organization, has made the development of a larger biotech sector one of its top policy priorities.

The state’s decision to help grow the state’s biotech industry could certainly pay off. Biotech is projected to be one of the nation’s fastest growing industries over the next few decades and New York State possesses virtually all of the ingredients that have fueled the industry’s growth in the few places where biotech has taken hold. Moreover, a larger biotech sector could help diversify New York’s economy, an important benefit at a time when both the state and city are overly dependent on Wall Street.

But this report--the second major study issued by the Center for an Urban Future about New York City’s biotech industry--documents that while the lion’s share of the state’s multi-million dollar biotech investment has gone to Buffalo, Rochester and Long Island, the over-whelming majority of the state’s biotech assets are located in and around New York City. The report, a follow-up to the Center’s 1999 report Biotech: The Industry That Got Away, is based on more than a year of reviewing industry data and interviewing dozens of biotech industry officials in New York and around the nation.

As the following figures indicate, the report finds that no other region in the state comes close to matching the city’s potential for growth in biotech:

For more figures, please see charts at the end of this report.

“The biotech industry has flourished best in this country in concentrated clusters grouped around strong academic research centers that supply ideas, personnel, consultants, and new spin-offs,” says Dr. Harold Varmus, president of Memorial Sloan-Kettering Cancer Center and former director of the National Institutes of Health. “Currently, only the New York City metropolitan region, with its several strong medical centers, universities, and federally supported research activities, has the ingredients and the reputation necessary to develop a large, sustainable biotech industry. No other place in the state will be able to consistently churn out biotech start-ups and attract top scientists--things that are essential to create the critical mass of biotech activity needed to attract and support this industry.”

Without additional financial support from the state, however, it’s unlikely that New York City will ever realize its true potential. In the city, as almost everywhere else in the nation, state funds are critical to the development of biotech incubators and other commercial research facilities. Indeed, every proposal for new or expanded biotech facilities now being floated by city-based biomedical institutions hinges on some government support, a condition that isn’t unique to the five boroughs. These projects are almost always subsidized with public funding because it’s very expensive to build the highly specialized facilities required by biotech firms and because companies in the industry--most of which are small and largely dependent on venture capital financing--usually can’t afford the high rents that developers would need to charge to make a profit.

Yet, while Governor Pataki and the Legislature have committed nearly $200 million for biotech development projects around the state over the past four years, very little of the money has gone to projects in New York City. Between 1999 and 20 01, the state committed just $1 million in funding for New York City, while granting $30 million in funding for four biotech projects on Long Island, $7 million to Rochester, $5 million for Buffalo, and $1.3 million for Ithaca. While the state’s investment in Long Island is a good start, any plan to take advantage of the potential for biotech growth in the New York City metro area must also include financial support for projects in the city. (See below for a list of state-funded biotech projects.)

This year, the governor and legislature agreed to provide $ 550 million for three programs--Centers for Excellence, GeNYsis and Restore New York--that will largely fund high tech and biotech development projects around the state. In June, Governor Pataki announced that $110 million of this total will help establish a bioscience complex in Buffalo. (See below for list of Centers of Excellence.)

But of the nearly $200 mill ion already designated from these programs, not a cent has been earmarked for projects in New York City. In fact, all five Centers of Excellence announced by the governor will be outside of the city--the others include a center for nanoelectronics in Albany, a center for photonics in Rochester, a center for environmental systems in Syracuse and a center for wireless Internet and information technology on Long Island. Most of the new funding from the GeNYsis and Restore New York programs will be allocated later this year. The Pataki Administration recently hinted that it would soon “make a major technology-related announcement in the New York City area,” but many industry insiders privately worry that New York City will receive an extremely small share of the pie for biotech projects.

While the state has not made a major investment towards the construction of new commercial biotech facilities in New York City since 1994--when the Cuomo Administration helped fund a biotech incubator developed by Columbia University--its Office of Science, Technology and Academic Research (NYSTAR) has provided a handful of grants to institutions based in the city, primarily for academic research projects. For instance, two of the eight Strategically Targeted Academic Research (STAR) centers funded by NYSTAR are based in the city. CUNY was awarded $15 million for its Structural Biology Center and Columbia received $11 million for its Integrating Imaging Center.

While helpful, none of these NYSTAR grants comes close to the level of state support in the Governor's Centers of Excellence program, which completely excludes the city. And, except for the small grant to the SUNY Downstate, the NYSTAR programs don't help the city overcome one of the main obstacles to the growth of its biotech industry: the lack of commercial biotech facilities.

“Outside observers don’t yet understand many of the details of the Centers of Excellence and GeNYsis programs, but… it’s apparently been put together politically, and it follows politicians’ natural tendency to ‘level’ support for competing jurisdictions rather than make strategic choices,” says David Hochman , senior principal of the partnership practice at Battelle, a high-tech consulting firm, and director of its New York City office. “While upstate cities should certainly not be denied an opportunity to shape their technology futures, some hard choices may have to be made if we are to exploit the state’s truly unique asset, which is undoubtedly the heavy concentration of academic R&D and developing clusters of bioscience startups around New York City and its Westchester and Long Island suburbs.”