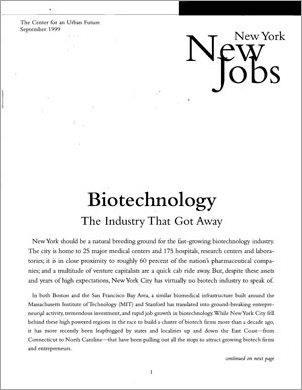 Biotechnology: The Industry That Got Away

During the 1990s, New York City had a golden opportunity to establish itself as a national center for the emerging biotech industry. How did we blow it?

New York should be a natural breeding ground for the fast-growing biotechnology industry. The city is home to 25 major medical centers and 175 hospitals, research centers and laboratories; it is in close proximity to roughly 60 percent of the nation's pharmaceutical companies; and a multitude of venture capitalists are a quick cab ride away. But, despite these assets and years of high expectations, New York City has virtually no biotech industry to speak of.

In both Boston and the San Francisco Bay Area, a similar biomedical infrastructure built around the Massachusetts Institute of Technology (MIT) and Stanford has translated into ground-breaking entrepreneurial activity, tremendous investment, and rapid job growth in biotechnology. While New York City fell behind these high powered regions in the race to build a cluster of biotech firms more than a decade ago, it has more recently been leapfrogged by states and localities up and down the East Coast-from Connecticut to North Carolina-that have been pulling out all the stops to attract growing biotech firms and entrepreneurs.

As a result, these areas are increasingly beating New York to the punch to win federal research grants and attract top-flight scientists, faculty and students. New York's diminishing share of research grants from the National Institutes of Health cost the state $350 million in 1996 alone. In addition to losing potential revenue and jobs, the city's failure to develop a viable biotech industry is in turn affecting the competitiveness of New York's biomedical/health care complex, which is the city's largest industry.

Over the course of a three month investigation, the Center for an Urban Future examined why the city has let this industry slip away and looked for ways to resuscitate this high-potential sector.

New York has missed the boat on the biotechnology industry primarily because the city has always lacked an infrastructure to support a growing biotech sector.
Most importantly, there is a serious shortage of affordable lab space, making it virtually impossible for start-ups and growing firms to remain in the city. For this reason alone, dozens of entrepreneurs and successful companies that sprouted up in New York have relocated to cheaper space in research parks, incubators and renovated factory buildings in Stony Brook, Princeton, Tarrytown and other nearby areas.

Numerous other entrepreneurs have fled New York because the city has never developed any "buzz" surrounding the city's biotech industry. Other areas that were able to retain and attract a "cluster" of biotech firms have managed to feed off their own success and attract private investment, spawn new start-ups and lure top scientists and students. New York's inability to achieve a critical mass of biotech firms has in turn made it exceedingly difficult to convince entrepreneurs to take a chance on the city. Many venture capitalists choose not to invest in New York-based biotech firms because they do not view the city as a receptive climate for biotechnology firms to thrive and grow.
Since the industry's inception, city and state officials have never grasped the economic potential of biotechnology or demonstrated the will to craft creative solutions to the unique challenges faced by the industry. While other states have been developing subsidized space for biotech firms in incubators and other high-tech facilities, New York City has just one building that is suitable for biotech start-ups. But even this facility-an incubator developed by the city, state and Columbia University-is beyond the price range of most start-ups.

The city's academic medical centers also share the blame. Unlike MIT, Stanford and other institutions around the country, New York's medical centers have a reputation for standing in the way of turning scientific discovery into entrepreneurial endeavors. The city's medical institutions have a long history of competing with one another instead of collaborating to strengthen the industry.

New York government officials and academic medical leaders may finally be getting the hint. Last December, Mayor Giuliani announced the formation of a biotechnology task force made up of leaders from many of the city's leading biomedical institutions to come up with a long-term plan to strengthen the industry. It's not too late to turn things around. But it won't happen unless city and state officials agree to dedicate the resources necessary to implement recommendations made by the task force and, equally important, the city's medical institutions begin to work together.

Finally, New York's failure to respond to the challenges faced by biotech firms should also serve as a lesson of what could happen in other industries if the city does not undertake a sector-based economic development strategy that works closely with industries. The story of New York's biotech industry should also be an example to everyone interested in creating jobs and improving the economic health of the city.


Code of the City