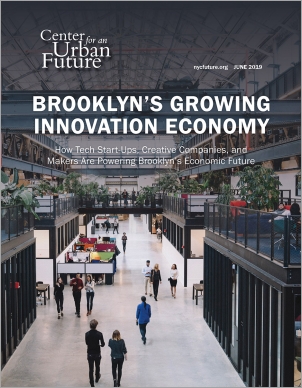 Brooklyn has emerged as one of the nation’s leaders in the innovation economy, driven by the borough’s growth in tech start-ups, creative companies, and next-generation manufacturers. This report provides a new level of data about the size and scope of Brooklyn’s innovation economy and highlights Brooklyn's competitive advantage in a part of the economy that is expected to grow significantly in the years ahead.

Like many other urban centers over the past decade, Brooklyn has seen strong job growth in healthcare, retail, restaurants, and education. But Brooklyn’s economy has kicked into higher gear than most other places thanks to the borough’s runaway success in the innovation economy.

As this data brief details, Brooklyn is one of just a handful of regions across the country to capture a significant share of the growth occurring in the innovation economy—a set of industries fueled by technology, creativity, and invention that is driving much of the nation’s high-wage job gains. Over the past decade, Brooklyn has outperformed the rest of New York City in these innovation industries, which have added thousands of well-paying jobs for New Yorkers, helped diversify the borough’s economy, and given Brooklyn an important competitive advantage in a part of the economy that is expected to grow significantly in the years ahead.

This analysis by the Center for an Urban Future (CUF) finds that Brooklyn has benefited from sustained growth in all three core areas of the innovation economy: tech start-ups,1 creative companies, and next-generation makers and manufacturers. 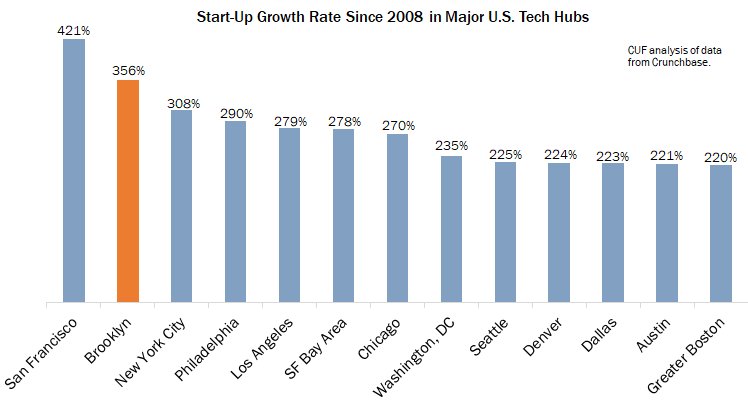 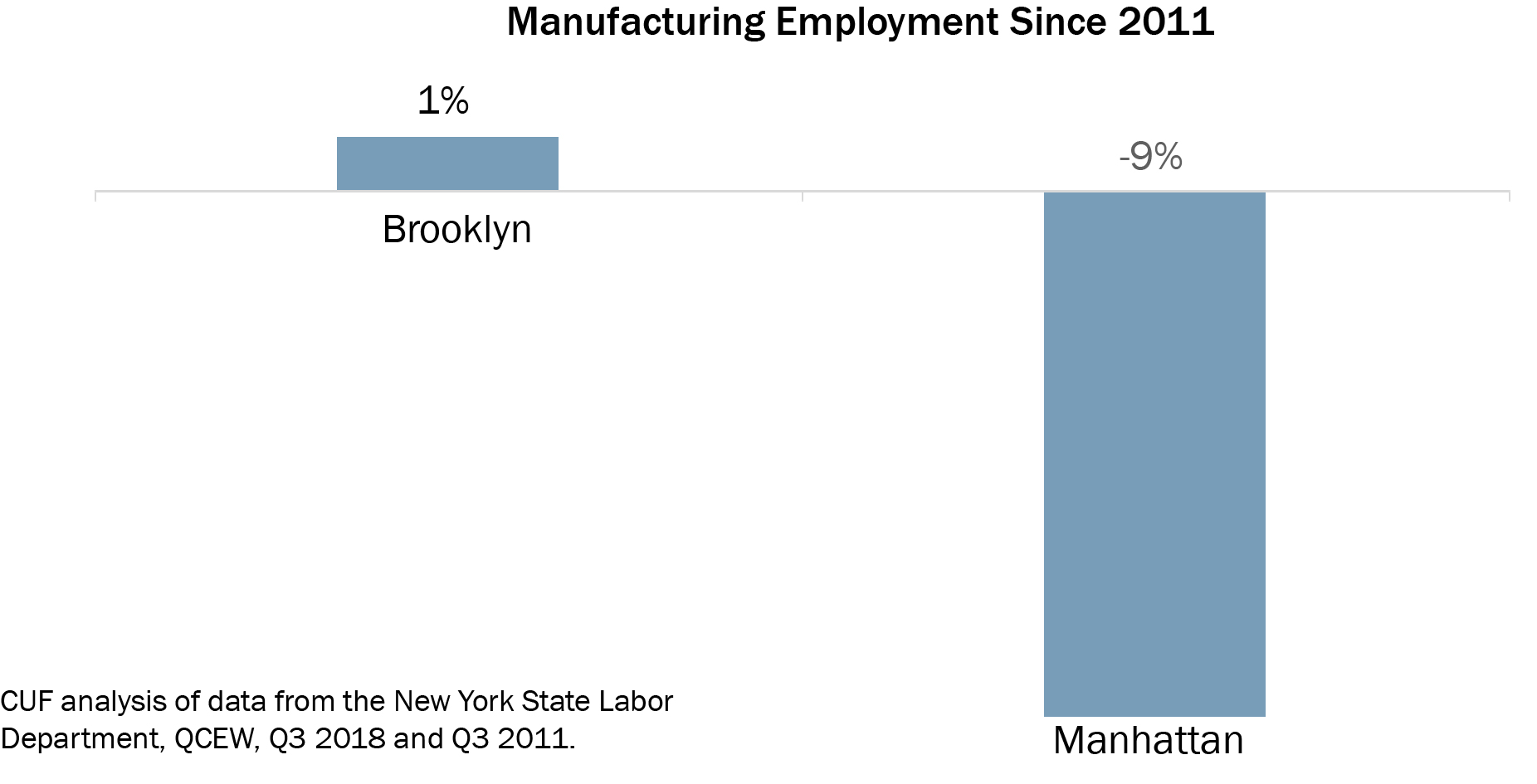 This new data brief builds on past efforts to quantify and support parts of the innovation economy in Brooklyn, such as the Brooklyn Tech Triangle studies of 2013 and 2015, which focused on the neighborhoods of Dumbo and Downtown Brooklyn, as well as the Brooklyn Navy Yard. The 2015 Brooklyn Tech Triangle report found at least 1,300 innovation firms in the three neighborhoods, employing approximately 17,000 people and generating $5 billion in economic impact each year. As these neighborhoods continue to grow, other clusters have emerged—including the creative campus of Industry City in Sunset Park, which is home to companies in tech, media, design, and other creative industries, as well as dozens of entrepreneurial makers.6

For this analysis, we consider the innovation economy to include a diverse mix of tech start-ups, creative companies, and next-generation makers and manufacturers. Across Brooklyn, these three core innovation sectors are fueling one another’s growth, producing a fertile environment for creative ideas to flourish into new businesses. Although operating in a broad array of markets and industries, these Brooklyn companies are linked by a shared use of emerging technology and creative tools to develop, design, and produce innovative new products, applications, platforms, and services.

Brooklyn’s innovation economy companies reflect a broad range of business ideas and opportunities, demonstrating several key strengths of the borough they call home. For instance, Downtown Brooklyn–based Gimlet Media has become a leader in the booming podcast industry, which rests on a foundation of both media and ad tech—and the company was recently acquired by Spotify for a reported $230 million. Other fast-growing Brooklyn start-ups include Brooklyn Navy Yard–based Care/of, a personalized wellness company whose successful first product, customized daily vitamin packs, has led to more than $42 million in investment; Downtown Brooklyn–based goTenna, a start-up that produces inexpensive devices to create distributed communications networks without cell service or WiFi; and Dumbo-based Paperspace, a cloud computing platform optimized for machine learning and artificial intelligence. Brooklyn has also given rise to several dozen innovative manufacturers that integrate technology and design, such as Tailored Industry, an on-demand, high-tech knitwear manufacturer for the e-commerce industry based in the Brooklyn Army Terminal; Radiator Labs, a creator of energy-saving smart radiator covers based in the Brooklyn Navy Yard; and the Industry City–based Keap Candles, a nearly zero-waste, direct-to-consumer scented candle company.

Although the innovation economy is growing from Union Square to the South Bronx, Brooklyn has emerged as the fastest-growing hub for innovation industries citywide. According to our analysis of Census data, in just the past two years, the number of Brooklyn residents working in “professional, scientific and technical services” industries increased by 14,569—accounting for 51 percent of the citywide increase. Similarly, 6,327 more Brooklyn residents worked in  “information” industries in 2017 compared to 2015, comprising 94 percent of the gain citywide. Brooklynites also accounted for 30 percent of the citywide growth in people working in arts, entertainment, and recreation. In addition, people living in Brooklyn make up 31 percent of all city residents working in manufacturing.

This analysis compares employment growth between 2007 and 2017 for the 25 most populous counties in the U.S., as well as seven other counties that were selected because of their strength in the creative economy: Travis County (Austin; #34 in list of most populous counties), Fulton County (Atlanta; #43), San Francisco County (San Francisco; #64), Multnomah County (Portland, OR; #77), Suffolk County (Boston; #78), Denver County (Denver; #90), and Davidson County (Nashville; #97).

3. CUF analysis of data from the U.S. Bureau of Labor Statistics, Quarterly Census of Employment and Wages (QCEW), 2007–2017.

7. CUF analysis of data from Crunchbase.

8. At the time of publication, Crunchbase was still acquiring and processing data for 2018, so the final figures are likely to increase slightly for the most recent year.

9. CUF analysis of data from Crunchbase.

12. CUF analysis of data from the U.S. Census, Quarterly Workforce Indicators. This is the most recent data available to analyze job growth by educational attainment.

13. Crunchbase tags all start-ups with one or more industry categories and subcategories. These categories are used to analyze the relative share and growth of various industries and sub-industries. Because a company can receive more than one tag (e.g., mobile and payments), the total of all industries by share adds up to more than 100 percent.

14. The analysis of fastest-growing industries includes all major industry categories and subcategories tagged in the Crunchbase dataset. Where a Crunchbase subcategory is the same as an industry (e.g., “artificial intelligence”), the larger industry total is used. This analysis includes only categories that added six or more start-ups since 2013.

15. The analysis of industries that have added the most start-ups since 2013 excludes three categories: “Consumer,” which does not appear in the Crunchbase data dictionary; and “Internet” and “Computer,” which are too general to connote a specific industry or sub-industry.

The Startup Song Remains The Same For Brooklyn Office Owners

Seattle Rocks as a Tech Startup Hub, But Some Cities Are Gaining Ground

The two competing visions for a Crown Heights ‘development desert’

Why Bushwick’s ‘Got Next’ in Brooklyn’s Emerging Innovation Economy

Houston named one of the fastest growing metros for tech startups

How to spread Brooklyn’s ‘Innovation Economy’

Brooklyn’s Economy Is Booming Thanks To Innovative Businesses

Silicon Valley Is Over! Top 10 Cities Where Techies Can Actually Afford to Live