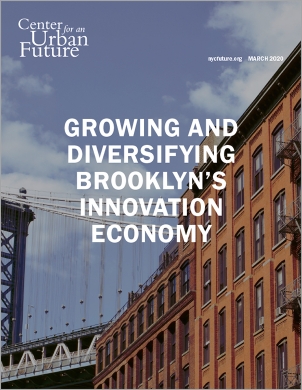 Brooklyn is now a national leader in the innovation economy—tech start-ups, creative companies, and innovative manufacturers—but it still has a ways to go. This report outlines the key obstacles to continued growth and considers how the borough can realize its immense potential to develop a larger and more inclusive innovation economy.

by Eli Dvorkin and Cara Eisenpress

In little more than a decade, Brooklyn has emerged as a national leader in the innovation economy. The borough’s recent growth in tech start-ups, creative companies, and innovative manufacturers is outpacing the rest of New York City and many other leading cities nationwide. This runaway success in the innovation industries has been a boon to both Brooklyn and New York City, adding thousands of new, well-paying jobs across Brooklyn, diversifying the borough’s economy, and giving Brooklyn an important competitive advantage in a part of the economy that is expected to grow significantly in the years ahead.

But despite its success, Brooklyn still has a ways to go to fully realize its vast potential in the innovation economy. For instance, although a disproportionate share of people working in tech and creative fields in New York City live in Brooklyn, surprisingly few large innovation companies have relocated to the borough. And though Brooklyn is teeming with small and mid-sized start-ups, many of them have struggled to scale up while remaining in the borough.

As this report details, a handful of challenges—from a lack of good intra-borough transit options to an insufficient amount of affordable office space for growing companies—are threatening to constrain Brooklyn’s future growth in the innovation economy.

At the same time, Brooklyn has work to do to make sure that the growth occurring in its innovation industries is more inclusive. While our research finds that the share of black and Hispanic workers in Brooklyn’s tech workforce is notably higher than in many other major tech hubs such as Boston, San Francisco, and Seattle, significantly more progress is needed in expanding access to the good jobs being created in Brooklyn’s innovation economy.

Although the borough boasts some of the city’s best schools, colleges, and workforce development organizations, our research finds that Brooklyn is still lacking in education and training programs that help expose Brooklyn residents to career pathways in the innovation economy and prepare Brooklynites for these jobs.

There is much at stake for Brooklyn to address these challenges and build a larger and more inclusive innovation economy. Doing so could mean thousands of additional well-paying jobs for residents across the borough in the years ahead, a welcome prospect at a time when a disproportionate share of the job growth nationally and in New York has been in low-wage industries—and when a new wave of automation will likely cause some good jobs to disappear.

This report outlines the key obstacles to growing Brooklyn’s innovation economy and creating new pathways into these jobs—and it puts forth a series of achievable recommendations to overcome these challenges and realize the borough’s immense potential to develop a larger and more inclusive innovation economy. Researched and written by the Center for an Urban Future and produced in partnership with Downtown Brooklyn Partnership, Dumbo Improvement District, Brooklyn Navy Yard Development Corporation, and Industry City, it is informed by interviews with more than 50 company founders, investors, educators, workforce development organizations, real estate developers, and economic development officials in Brooklyn, as well as more than a dozen experts working in relevant fields outside of the city. It builds on the Center’s June 2019 data brief, Brooklyn’s Growing Innovation Economy, which provided a new level of detail on the diverse mix of tech startups, creative companies, and entrepreneurial makers and manufacturers that are flourishing in Brooklyn today.

Our research shows that Brooklyn is one of just a handful of regions across the country to capture a significant share of the growth occurring in the innovation economy—a set of industries fueled by technology, creativity, and invention that is driving much of the nation’s high-wage job gains. In 2018, forinstance, Brooklyn was home to 1,205 tech-powered start-ups—a remarkable increase from 264 start-ups a decade ago. Additionally, employment in Brooklyn’s creative industries surged by 155 percent over the past decade, nearly ten times the growth rate of Manhattan. And Brooklyn’s manufacturing sector has significantly outperformed the city’s, with much of the growth coming from a new generation of companies at the intersection of manufacturing, technology, and design. 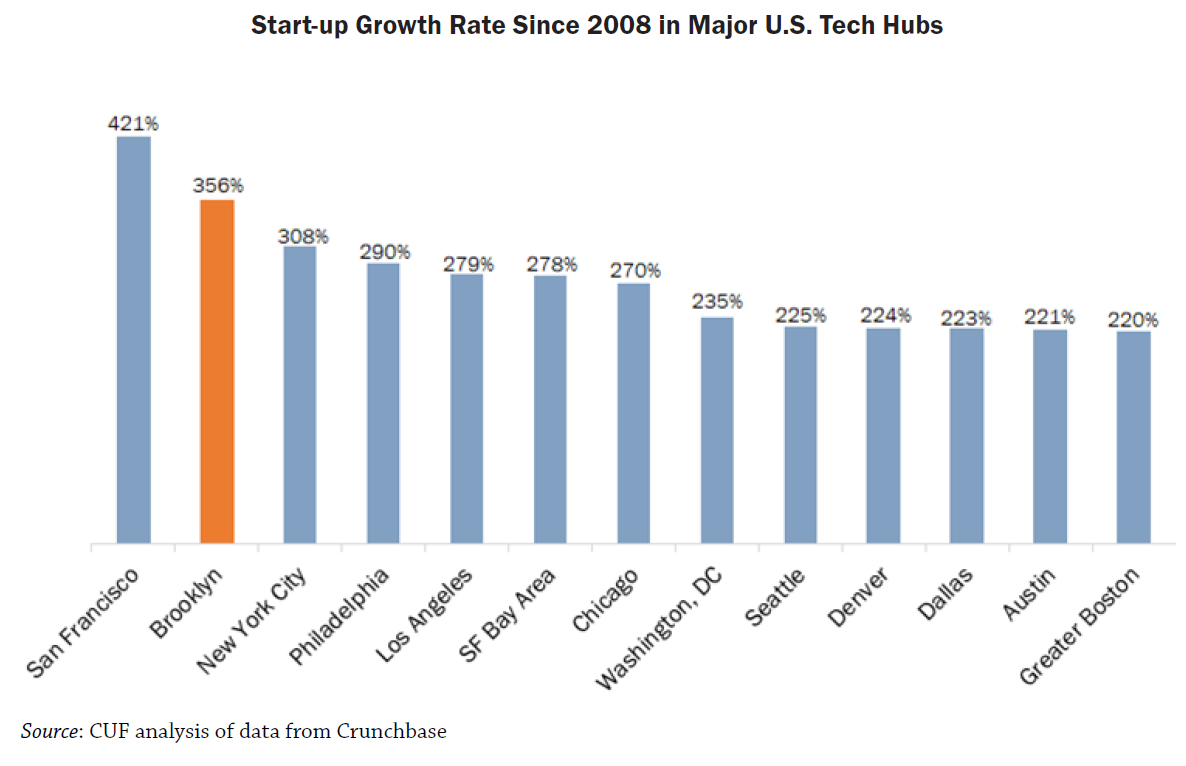 Nearly everyone we interviewed said that Brooklyn is well positioned for even more growth in the core industries of the innovation economy. Today, Brooklyn has a strong foundation of tech start-ups, creative companies, advanced manufacturers, and entrepreneurial makers that either started in the borough or have been planting roots here for several years. The borough is home to an unmatched pool of tech and creative talent. It also has a more diverse innovation economy workforce than most other cities, a point of strength at a time when many employers are understandably feeling pressure to diversify their workforces. And Brooklyn benefits from a robust innovation infrastructure—with vital R&D centers like NYU Tandon School of Engineering and New Lab, and roughly 60 incubators and co-working spaces.

In addition, our research identified a range of other challenges that could inhibit the growth of theinnovation economy in Brooklyn, if left unaddressed.
These include: 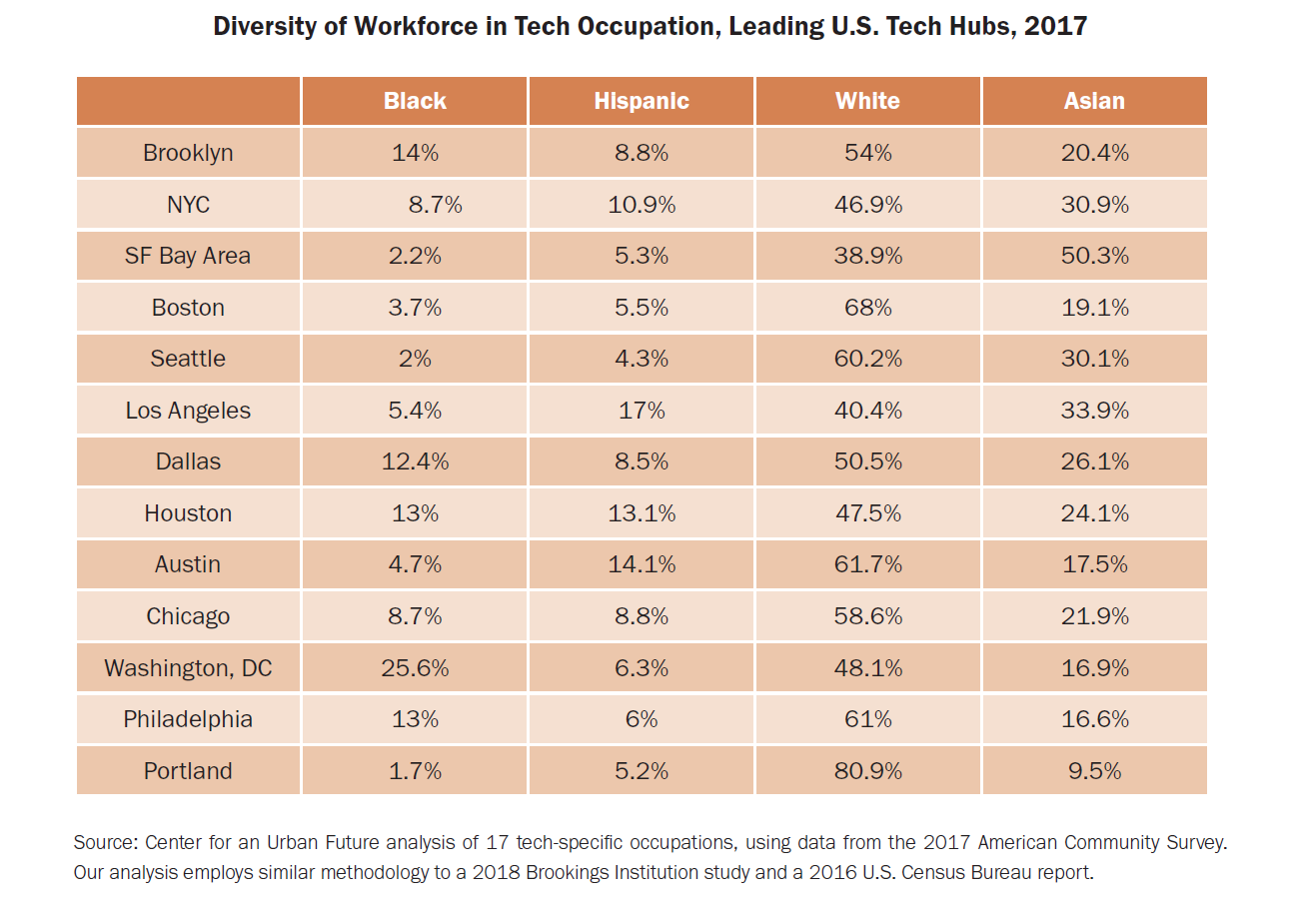 While Brooklyn has more to do to keep its innovation economy growing, it also will need to take steps to ensure that a lot more residents from Brooklyn’s lowerincome communities are able to access the well-paying innovation industry jobs being created in the borough.

Jobs in the borough’s innovation economy have the potential to become the middle-income career paths of the future, transforming the lives of New Yorkers from lower-income backgrounds. But to realize this potential, city and local leaders needs to make significant strides in equipping Brooklynites with the skills and experience necessary to succeed in the innovation economy. Indeed, it was abundantly clearfrom our site visits and interviews that Brooklyn’s innovation economy workforce does not adequately reflect the borough’s diversity.

Brooklyn is far from the only city with a troubling opportunity gap in the innovation economy. In fact, an analysis we conducted for this report shows that Brooklyn’s tech workforce is notably more diverse than several other leading tech hubs. According to our analysis of 17 tech-specific occupations, Black and Hispanic workers account for 22.8 percent of Brooklyn’s tech workforce (14 percent Black and 8.8 percent Hispanic).1 This is significantly higher than Boston (9 percent Black and Hispanic combined), the San Francisco Bay Area (7 percent), and Seattle (6 percent).

The comparatively diverse workforce is a clear strength for Brooklyn’s innovation economy. But there is still much more progress to be made in a borough where the overall workforce is 27 percent Black and 21 percent Hispanic.2 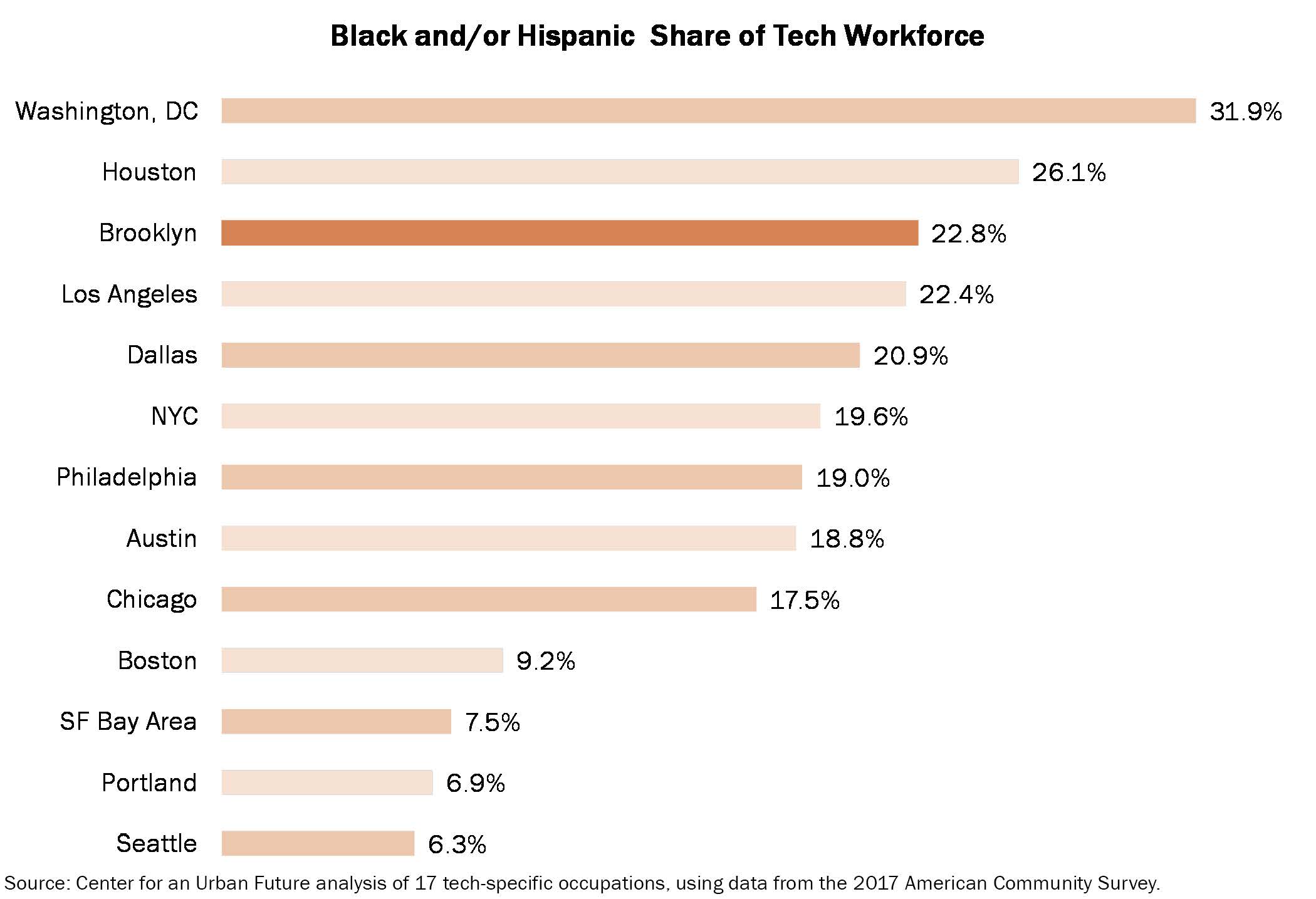 Our research took a close look at how to expand access to the jobs in Brooklyn’s innovation economy. We conclude that the borough’s leading stakeholders—including policymakers, leaders of academic institutions, heads of workforce development organizations, philanthropic foundations, and innovation economy employers—will need to make meaningful new investments to expand and improve the borough’s education and workforce training infrastructure. In particular, Brooklyn’s stakeholders will need to address the following specific challenges that were surfaced in our research:

​Brooklyn has a golden opportunity to make progress on  both areas that are the focus of this report: keeping its innovation economy growing and expanding access to the well-paying jobs in this sector. But it will requirepublic sector leaders—in Brooklyn and at City Hall— working closely with leaders from industry, academic institutions, and nonprofit workforce organizations to make new investments and institute new policies to help the borough overcome some key challenges.

This report outlines the key obstacles to growing Brooklyn’s innovation economy and creating new pathways into these jobs—and it puts forth a series of achievable recommendations to overcome these challenges and realize the borough’s immense potential to develop a larger and more inclusive innovation economy.

1. To examine the racial and ethnic composition of Brooklyn’s tech sector, we analyzed 17 tech-specific occupations, such as database administrators, web developers, and computer network architects, using data from the 2017 American Community Survey and employing similar methodology to a 2018 Brookings Institution study and a 2016 U.S. Census Bureau report.

2. Center for an Urban Future analysis of data from the 2013-2017 American Community Survey.

3. CUNY Office of Institutional Research and Assessment. Of the 594 engineering grads at CUNY senior colleges in 2016-2017, zero were at Brooklyn schools. All of the 594 were at City College, Baruch & CSI (and one at CUNY J School).

Growing and Diversifying Brooklyn’s Innovation Economy is a publication of the Center for an Urban Future. Researched and written by Eli Dvorkin and Cara Eisenpress. Edited by Jonathan Bowles, Eli Dvorkin, and Laird Gallagher.

Everything You Need to Know to Start and Grow Your Company in the Midwest
Inc.

Everything You Need to Know to Start and Grow Your Company in the Midwest
Inc.