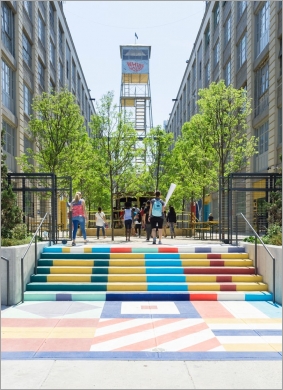 Why I Support the Industry City Rezoning

In this testimony before the NYC Council Subcommittee on Zoning and Franchises, CUF executive director Jonathan Bowles details his support for the Industry City rezoning, which can help New York build both a larger and a more inclusive innovation economy.

I support the proposed rezoning because I strongly believe Industry City is crucial to producing the well-paying, accessible jobs of the future.

The first report I authored at the Center – way back in 1999 – argued that New York needed to do a lot more to preserve and grow industrial jobs.

I was convinced that New York could stem the losses in the manufacturing sector, which had long been a ticket to the middle class for New Yorkers from low-income backgrounds.

Manufacturing jobs are still vital middle class jobs in New York. There just aren’t enough of them left to be the primary focus of our efforts to lift New Yorkers out of poverty.

We now need other strategies to move low-income New Yorkers into good jobs.

One should be to nurture the well-paying jobs that are already growing rapidly in New York – while dramatically increasing efforts to make those industries more inclusive.

Where good jobs have been growing, it’s largely been in the innovation economy, particularly in the tech and creative industries – exactly the kinds of jobs being created at Industry City.

These sectors will continue to drive job growth. Indeed, during the pandemic, both the tech and creative industries have held up better than nearly every other part of the economy.

Other cities are laying out the red carpet to poach these good jobs from New York.

We need to keep them here, and lay the groundwork for additional growth – now more than ever.

We can help by supporting this rezoning.

Finally, I’d also urge the Council to run with several of the policy recommendations my colleagues and I have made to expand access to jobs in the innovation economy, including scaling up successful tech training programs, boosting apprenticeships, creating new bridge programs, and investing in CUNY.