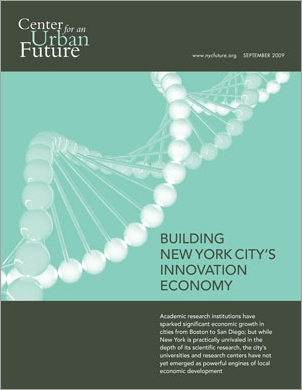 This report finds that New York City's leading universities and scientific research centers have not become catalysts for entrepreneurship and local economic development the way similar institutions have in other regions. It argues that this is a huge missed opportunity for New York, given the need to diversify the economy and create new engines of job growth. The study details why New York is falling short, showing that university leaders have not done enough to support start-up ventures.

The report is accompanied by the city's first-ever "Innovation Index," a package of 49 charts and graphs that show where New York stands compared to other cities and regions on a broad range of indicators measuring both existing science and technology assets and the city's level of success at commercializing these assets.

by Jim O'Grady and Jonathan Bowles

Click here to view the 2009 Index of the NYC Innovation Economy (PDF).

Can New York ever produce a Google?

How New York can become a genius magnet: The art of engineering a 21st century science center

To Attract the Next Google, the City Seeks a New College

NY’s Tech Community and the NYCEDC - A Meeting of the Minds?

Silicon Alley Gets a Boost

The Daily Start-Up: New York, A City Whose Universities Sleep?

Hot or Not? Technology Entrepreneurship in New York City

NY Start-up Environment Could Use Some Improvement

Can You Read My Mind Now?