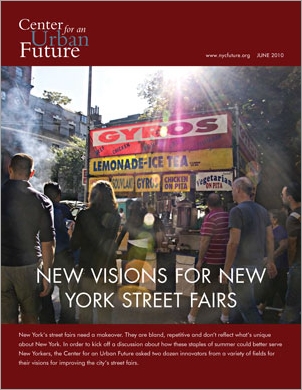 New York City street fairs need a makeover. But just what should be done to improve these much-maligned staples of summer? This report features the visions of 25 architects, urbanists, artists, developers and other innovative thinkers, including the founders of successful public markets like the New York City Greenmarket, Union Square Holiday Market and Brooklyn Flea, as well as the creator of Chowhound.com, the organizer of Red Hook Food Vendors and musician David Byrne.

Will There Be A Street Fair (R)Evolution?

Getting Rich Off Street Fairs?

Attack of the Tube Socks

How street it is, for kings of the fair as producers get lion’s share from cookie-cutter fests

The Pushcart Market Celebrates Vendors Instead of Fines Them

Study says street fairs are too dull, too frequent

How Do You Get New York’s Street Fairs Past Fried Dough?

Pol: Give NY’ers a ‘fair’ warning

Will There Be A Street Fair (R)Evolution?
Gothamist

Will There Be A Street Fair (R)Evolution?
Gothamist