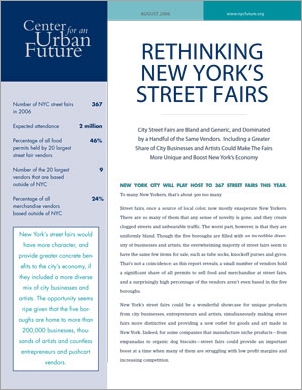 In this policy brief, the Center documents that city street fairs are dominated by a handful of the same vendors selling bland items like tube socks and t-shirts, and that a surprisingly high percentage of vendors are based outside of the city. It calls on the city to make the fairs less generic.

by Jonathan Bowles and Tara Colton

Update: October 2008 Update: Changes Ahead for NYC’s Street Fairs? Our 2006 report about the problems with New York’s street fairs may now be prompting the Bloomberg administration to consider wholesale changes in how the events are run. The New York Times reported that Mayor Bloomberg recently said that street fairs were too numerous and too homogeneous, echoing our critique that street fairs are overly generic and don’t reflect what’s unique about the city.


On Transient Retailing in NYC: Hold the Tube Socks!

The Blandness of the Asphalt Fairground

The Jewel Box of Union Square

Better Fare for the Fair?

Take it or leave it, Street fairs

Study Says New York Street Fairs Are All the Same

Back Rubs? Check. Chickens? Not at These Fairs.

On Transient Retailing in NYC: Hold the Tube Socks!
Curbed

On Transient Retailing in NYC: Hold the Tube Socks!
Curbed