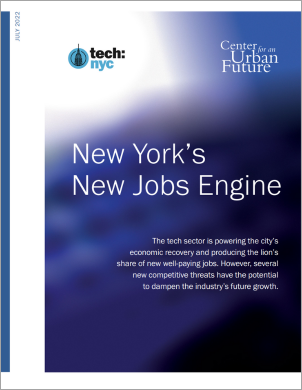 The tech sector has matured into New York City's single most dependable economic engine and reliable source of new well-paying jobs. However, New York will have to overcome new challenges and gathering headwinds to build a larger, more sustainable, and more inclusive tech ecosystem.

by Billy Richling with Jonathan Bowles

Help NYC continue to attract and retain talent by prioritizing investments in transit, parks, safety, and culture. Nothing has been as crucial to New York’s remarkable rise as a tech hub in recent decades than the city’s ability to attract and retain highly educated, creative, and entrepreneurial people. Simply put, tech companies big and small have chosen to locate and grow in New York, despite the nation’s highest costs of doing business, because of the city’s unparalleled pool of tech talent. Similarly, nothing would be more harmful to New York’s future growth prospects in tech than losing the city’s steady pipeline of talented tech workers. The most important thing city leaders can do to continue attracting and retain this workforce is by making investments that keep New York eminently livable, vibrant, safe, and easy to get around. This means boosting subway service, expanding and improving parks and open spaces, growing the city’s bike infrastructure, ensuring cultural vibrancy, and keeping the city’s streets safe and clean.

Create a plan to double employment in the city's tech sector by 2030. No other part of New York City’s economy has as much potential to add well-paying jobs in the years ahead, but it’s not a given that all this growth will occur. The Adams administration should develop a long-term strategy to ensure that New York realizes this considerable potential. Although city government isn’t going to double the size of New York’s tech sector, the wrong economic development, regulatory, and legal policies could cause the city to miss out on the sector’s extraordinary potential for future job growth.

Create a team at NYCEDC focused on helping NYC capture significant market share in several emerging tech sub-industries. New York has the potential to become a national or global leader in several emerging tech sub-fields, from blockchain and women’s and family tech to augmented reality and wellness. NYCEDC should create new staff resources to nurture and support these and other fields within the broader tech sector that have considerable potential for future job growth. This might be modeled after the “industry desk” system that NYCEDC used in prior years, in which dedicated staff were assigned to a sector—including life sciences, finance, media, and fashion—and charged with building relationships with industry leaders, understanding key challenges and opportunities facing the sector, and developing specially tailored programs and initiatives to support the sector. Under a new model, NYCEDC might assign staff to several different tech sub-industries, each of which faces unique challenges and opportunities.

Position New York to become an unmatched place for remote and hybrid work. While companies across the economy are adopting elements of remote and hybrid work, the uptake rate has been considerably higher in the tech sector. The fact that so many tech employees are opting to work from their homes doesn’t necessarily mean that New York will lose out, but it could spell problems over the long term if a growing share of New York’s tech employees decide to move elsewhere. New York City should get ahead of this trend, and make a series of infrastructure investments and policy decisions that enable New York to become the best place in the nation for remote and hybrid work. This might include investing in new pocket parks and open spaces in residential neighborhoods to make working from home in New York an even more attractive experience, and streamlining rules that make it easier for property owners in commercial strips outside of Manhattan to convert first or second-floor retail spaces into hubs for communal office work. It could also involve working with real estate leaders to ensure the development of new spaces in the city’s central business districts that aren’t offices but rather places that enable companies and workers to meet and build “connective fiber,” as urbanist Richard Florida has suggested.

Make NYC a test bed for new technologies. Nearly 40 percent of the companies operating at Newlab today relocated from outside of New York State. According to Newlab CEO Shaun Stewart, many of them opted to build their business here specifically because the Brooklyn Navy Yard is one of the only places in New York where early-stage companies can test their technology. Nearly everywhere else across the five boroughs, however, city regulations and rules make it incredibly difficult to launch the type of pilots that occur regularly in the Navy Yard—from testing pipe inspection devices under the buildings to piloting amphibious drones in the East River. City officials should change this and work with Business Improvement Districts (BIDs) and other community stakeholders to designate specific neighborhoods as spaces where startups can safely pilot urban tech like micromobility and autonomous vehicles, agriculture and food tech, and even certain types of manufacturing or quantum computing. The Downtown Brooklyn Partnership’s Living Lab initiative can serve as a model. Doing so would make New York attractive to entrepreneurs in the city and around the globe who are building the fast-growing companies of tomorrow.

Make it easier for startups to win city technology contracts. New York is the world’s second leading startup tech hub, but the city’s own procurement policies make it extremely difficult for any of the city’s small and mid-sized tech startups to compete for technology contracts. City officials should change this, re-evaluating its RFP system and eliminating barriers for small, local firms to win city contracts. Doing so would create powerful new growth opportunities for city startups, and potentially improve the effectiveness and efficiency of city government.

Step up efforts to attract international tech companies to NYC. It’s crucial that New York nurture the entrepreneurs and founders that are already here in New York, but the city can augment this job growth by becoming even more of a magnet for innovators to set up shop here. Although several dozens of tech companies from around the globe have either relocated to New York or established their American office here, many believe there is significant untapped potential. A concerted effort from NYCEDC could make a difference.

Launch a bold new city effort to expand access to tech jobs. While the tech sector has become the city’s most reliable source of new well-paying jobs, far too few New Yorkers of color have been able to access these jobs. To help change this, Mayor Adams should launch a bold, long-term plan to expand and improve the tech skills-building ecosystem, backed up by significant new public investment. This should include both an expansion of tech-focused training programs for adults and K-12 computing education. More specifically, we recommend prioritizing the following actions.

New York’s New Jobs Engine is a publication of the Center for an Urban Future and Tech:NYC. Researched and written by Billy Richling with Jonathan Bowles. Edited by Eli Dvorkin. Additional research by Charles Shaviro, JT Ennis, and Sophia Annabelle Klein. Designed by Stislow Design.

Tech:NYC is an engaged network of tech leaders working to foster a dynamic, diverse, and creative New York. We bring together New Yorkers to support a successful technology ecosystem, attract and retain top-tier talent, and celebrate New York and the companies that call it home.

Tech bros prosper in New York, but won’t overrun it

Editorial: As some Big Tech companies pull back, others are wise to still bet on New York

This report was produced in partnership with Tech:NYC.

Join us on 8/30 for our forum "Strengthening NYC's Human Services Nonprofits by Reducing Their Administrative Burde… twitter.com/i/web/status/1…
RT @HSC_NY: On AUG. 30, join HSC @nycfuture @PonceBank for a policy forum with govt & nonprofit leaders to learn how the City and State can…
RT @JohnSurico: This is great news for a very overlooked but integral part of city service delivery that has faced these issues for some ti…
RT @NYCommTrust: #NYC is home to 12% of the nation's #immigrant #artists. How can our city make it easier for these artists to create art,…
Follow @nycfuture