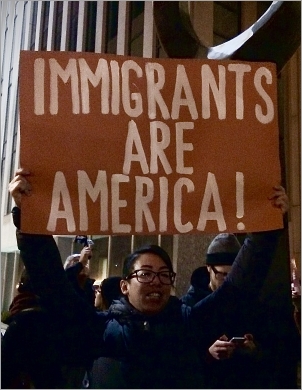 The Numbers Behind the Immigration Debate

After the Trump administration launched its ban on refugees and travelers from seven Muslim-majority countries last month, the Center for an Urban Future took a deep dive into our research on immigration to elevate the facts. Here is what we found.

When the Trump administration launched its ban on refugees and travelers from seven Muslim-majority countries last month, thousands of New Yorkers took to the streets to protest. At the Center for an Urban Future, we took a deep dive into our research on immigration to elevate the facts.

Over the past 20 years, the Center has frequently returned to the vital role of immigrants in New York City, both as architects of the city’s culture and engines of its economy. After all, although immigrants make up 37 percent of the city’s population, they comprise nearly half of its workforce.

This is among the great ironies of the immigration ban: For a president who claims to understand business and the economy better than anyone, his administration seemed to be ignoring a simple fact. Both in New York City and across the country, immigrants create massive economic dividends not only for themselves but for their entire communities.

In our response to the executive order, the Center created a series of Facebook posts exploring the role of immigration as an economic stimulus. The thinking was, rather than writing a blog post or penning an op-ed, we wanted to take our findings—drawn in part from last year’s A City of Immigrant Workers report—directly to the people.

If you happened to miss some, or all, of the posts in our #MattersOfFact series on the importance of immigrants to New York City’s economy, you can find them at the following links.

If you enjoyed this work, we hope you will follow us on Facebook, as well as Twitter, as we continue to experiment with new forms of outreach and advocacy.