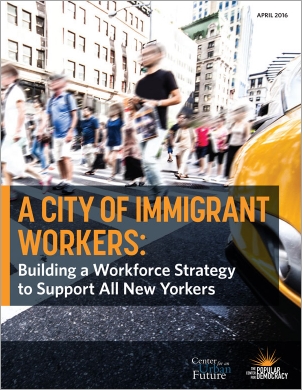 A City of Immigrant Workers: Building a Workforce Strategy to Support All New Yorkers

Immigrants make up nearly half of New York City’s labor force but face significant challenges when it comes to accessing decent paying jobs and connecting to city-sponsored workforce development programs. With Career Pathways, Mayor de Blasio’s ambitious new approach to workforce development, the administration has an important opportunity to better incorporate the city’s immigrant workers into its workforce development strategy.

New York City is a city of immigrants. New York is home to the most diverse immigrant population of any major city in the world and immigrants make up nearly half of the city’s workforce. Yet the city is faced with a paradox: while immigrants are employed at higher rates than native-born New Yorkers, they are disproportionately clustered in low-wage occupations and are frequently taken advantage of by both exploitative employers and predatory employment agencies. As the city government has begun restructuring its workforce development system, it has created an important opportunity to address these inequities faced by immigrant New Yorkers.

The study was made possible through the generous support of the Ford Foundation and the New York Foundation.

Commendably, New York City Mayor Bill de Blasio is leading a shift in the city’s approach to workforce development by moving away from a system that prioritized rapid job attachment regardless of job quality and working instead to create a more equitable career pathways framework—a systemwide framework that aligns and coordinates education, training, credential attainment, and early job exposure opportunities to serve workers at various stages of the job continuum. In November 2014, the Jobs for New Yorkers Task Force, convened by Mayor de Blasio, issued the Career Pathways report, recommending a sector-based strategy to build skills among workers based on employer needs, improve access to quality jobs, and feature greater system and policy coordination.

This report argues that to succeed in this transformation, the de Blasio Administration and the philanthropic community must fully account for the needs of New York’s immigrant workforce and incorporate a population-focused strategy to complement its sector-based approach. Specifically, the workforce development system should build the right career ladders while raising workplace standards and job quality for immigrant workers, and improve immigrant access to workforce development services through enhanced systems coordination.

At stake in this shift is not only the economic empowerment of immigrant New Yorkers, but also the economic vitality of the city as a whole. Immigrants already contribute significantly to the city’s economy. These contributions could be even greater if immigrants were ensured access to workforce development services that meet their needs. A coordinated strategy for immigrant inclusion is critical
for the long-term success of public and private investments in workforce development and local poverty-fighting efforts, and the overall continued economic growth of our city.

A City of Immigrant Workers
At almost 40 percent of New York City’s population and nearly half its total workforce, immigrants are undeniably integral to the city’s economy. Immigrants bring diverse skills and multilingual assets
to the workforce. They also make up significant percentages of key sectors where the city is investing tremendous resources to build industry partnerships and career pathways, including food service, construction, healthcare and retail. Yet at the same time, too many immigrant workers are trapped in lower-wage occupations within these sectors and lack opportunity or access to tools for advancement.

An inclusive approach to workforce development should address all of the most common barriers to immigrants’ ability to advance along a career pathway and fully contribute to the local economy.
These include:

A workforce development system that can help immigrants address these barriers would allow the city to fully benefit from immigrants’ diverse skill sets and work experiences while making it possible
for immigrants to reach their full potential as workers and residents of New York City.

A Fractured Workforce Development Ecosystem
The lack of coordination and of an immigrant-specific approach at the city level makes it difficult for immigrant New Yorkers to access the workforce development system. In addition, publicly funded workforce programs have not tracked or evaluated how immigrants in particular are being served by the current system. In interviews for this report, immigrant providers stated that publicly funded workforce programs tend to be poorly suited for immigrant needs, and are often nonexistent in the most immigrant-dense neighborhoods. In addition, undocumented immigrants are often ineligible to receive services from publicly funded programs due to federal funding restrictions. And while privately funded efforts have had success in reaching immigrant populations, they have generally done so only at a small scale. Community-based organizations that do serve undocumented immigrants rarely specialize in workforce development, and are faced with limited resources.

More coordination among and between public and private actors, both from within and outside of the city’s formal workforce development system, is needed to improve the system for all users, but
particularly for immigrant workers who have specific needs.

Recommendations
To be effective in a city where half of the workforce is foreign-born, New York City’s workforce development system must leverage sector-based and population-based strategies to ensure that immigrant workers and job-seekers can take advantage of workforce development services and thus participate more fully in the labor force. This will also ensure the overall success of the Career Pathways plan, given the sheer number of immigrants in the sectors it prioritizes.

New York City and the philanthropic community must address barriers to immigrant inclusion and the fractured workforce development ecosystem by adopting the following recommendations:

This paper was written by Kate Hamaji for the Center for Popular Democracy (CPD) and Christian González-Rivera for the Center for an Urban Future (CUF). It was edited by Connie Razza (CPD) and Jonathan Bowles (CUF). The study was made possible by the generous support of the Ford Foundation and the New York Foundation.

General operating support for CUF has been provided by the Bernard F. and Alva B. Gimbel Foundation, the Lucius N. Littauer Foundation and the M&T Charitable Foundation.

CUF is a catalyst for smart and sustainable policies that reduce inequality, increase economic mobility and grow the economy in New York City. An independent, nonpartisan policy organization, CUF uses fact-based research to elevate important and often overlooked issues onto the radar of policymakers and advance practical solutions that strengthen New York and help all New Yorkers participate in the city’s rising prosperity.