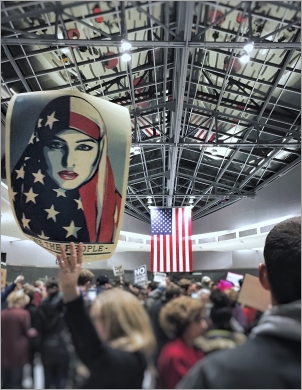 In this testimony before the New York City Council Committee on Economic Development, CUF's policy director, Matt Chaban, presents data from the Center's decades-long work documenting immigrants central role in New York's economy, and how the White House's travel ban and other policies might undermine this bedrock of the city.

Before the New York City Council Committee on Economic Development

Good afternoon, Chair Garodnick and members of the committee, and thank you for inviting the Center to share our work on this important issue.

My name is Matt Chaban, and I am the policy director of the Center for an Urban Future. We’re an independent, nonpartisan think tank based in Manhattan whose mission is advancing smart and sustainable public policies to reduce inequality, increase economic mobility and grow the economy for all New Yorkers.

Over 20 years, we have produced exhaustive research on these issues, including ways to help New York’s women entrepreneurs succeed; what it takes for small businesses to grow and thrive; the way the city’s capital construction system is failing its cultural institutions; the shortcomings in the high school equivalency system; and the issue that brings us here today: immigration’s central role in the city, and particularly its economy.

Thank you for this opportunity to testify.

So here we are at the Economic Development committee talking about an immigration ban. The two could not be more opposite, and nowhere is that truer than New York. Over our two decades, the Center has frequently returned to the vital role immigrants play in New York City, both as architects of the our culture and engines of our economy.

For four centuries, the city has been one of immigrants and commerce, where each invigorates the other. This will not change, no matter the actions of Washington, though the administration can still hurt New York when it has rarely been stronger.

The White House’s actions are risking business. While only one out of three New Yorkers are foreign-born, nearly half of the workforce hails from another country. And a surge in foreign-born New Yorkers since the 1980s has tracked closely with the city’s recovery. Their ranks have nearly doubled, according to the Center’s research, to more than 3 million, while the native-born population declined by a few percent.

Indeed, this is among the great ironies of the immigration ban: For a president who claims to understand business and the economy better than anyone, his administration seemed to be ignoring a simple fact. Both in New York City and across the country, immigrants create massive economic dividends not only for themselves but for their entire communities.

In 2013 alone, immigrants in New York accounted for $257 billion in economic activity, according to a 2015 analysis by the New York State Comptroller’s Office (PDF: http://bit.ly/2lgqoFz). This activity has nearly doubled since 2000, growing faster than the city’s overall economy; whereas immigrants generated 29 percent of the city’s economic output in 2000, this share reached 32 percent in 2013.

And these contributions come from all corners of the immigrant community, even those thought to live in the shadows.An analysis by the Institute on Taxation and Economic Policy (PDF: http://bit.ly/2lfQUOF) found that undocumented immigrants in New York State contributed $1.11 billion in local and state taxes last year. And they pay a greater share than other New Yorkers, with an effective rate of 8.9 percent, compared to 8.1 percent for the typical state resident. Furthermore, the institute estimated that were these New Yorkers granted full legal status, their contributions would rise to $1.36 billion, with an effective tax rate of 9.9 percent.

Such contributions to the city’s culture and coffers would not be possible without immigrants’ contributions to many of New York’s most important industries—including many people might not expect. We are familiar with the cabbie or the garment worker hailing from Africa or Central America; those jobs are 88 and 96 percent immigrant held. But well-paying, high-skilled jobs that keep us healthy and housed also rely on foreign-born New Yorkers: some 70 percent of life scientists, 59 percent of pharmacists, and 60 percent of civil engineers in the city hail from outside the country.

And in the creative industries—a growing bedrock of the city’s economy at roughly 7 percent of all employment—immigrants also play a notable role. Nearly 50,000 foreign-born New Yorkers are employed in creative occupations, and they account for an astounding 14 percent of all foreign-born creative professionals in the United States.

The most promising part of the city’s economic explosion has been a newfound entrepreneurial spirit, and here, too, immigrants are having an outsized impact. There are roughly 41,000 foreign-born business owners in the city, compared to 32,000 native-born ones, again despite the fact there are roughly twice as many native-born New Yorkers. And these enterprising immigrants employ all manner of New Yorkers, whether opening a Thai restaurant with American-born servers and delivery workers from the Middle East or creating a healthcare start-up with programmers from South Asia, Eastern Europe, and the West Coast.

As we have already heard, the actions of the White House are also impacting those temporary immigrants who have become such a vital part of our economy: tourists. New York has always been one of the top travel destinations on the planet, but the boom in tourism remains staggering, having nearly doubled over two decades to 60 million visitors last year. Because of the travel ban, many of the jobs these tourists make possible are now threatened.

The Center is now at work on a major new report documenting the growing economic importance of tourism to New York’s economy, which we look forward to sharing in the coming months. Already our research has shown that in 2014, more than 362,000 jobs were sustained by visitors to New York City, with total wage of $22.5 billion. In just two years, those jobs have continued to surge, growing 5 percent to 375,000 jobs.

These are not just jobs for tour guides and hotel concierge, either. In 2014, there were approximately 275,000 direct tourism jobs while 87,000 were jobs created through indirect or induced spending. That means the baristas at that underground roastery in Bushwick and the copy editors at the Time Out New York have just as much to lose should tourism fall.

Whatever comes to pass with the White House’s immigration policy, now is the moment for New Yorkers to come together and unleash the full potential of the city’s immigrant communities. Both the Council and the administration have supported these goals before, and it is now more important that they do so than at almost any time in the city’s history.

The opportunities for strengthening these critical, and vulnerable, communities are everywhere. It could mean easing the burden on immigrant entrepreneurs; improving our libraries, which are critical hubs for both immigrants and jobseekers; and helping highly skilled yet underemployed New Yorkers leave behind their brooms and taxis and return to the hospitals and offices where they can make the greatest impact on the city.

Thank you again for this important opportunity to share our work on this critical issue. I have included links at the bottom of our testimony, if you would like to find more information about our research, as well as recommendation on how to improve the situation of immigrant workers and entrepreneurs.

A City of Immigrant Workers: Building a Workforce Strategy for All New Yorkers

Creative New York: The Critical Role of the Cultural Industry