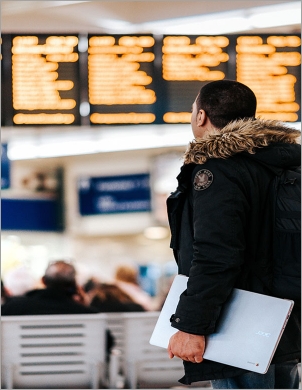 In October 2018 the Port Authority announced that it will begin offering unlimited, free wireless Internet service at all of its airports, while doubling download speeds. Previously, the city’s major airports offered just 30 minutes of free WiFi before requiring payment. Given more stringent security policies and record numbers of passengers, travelers are spending more time in airports than ever before. But the city’s major airports have long struggled with seriously lacking wireless Internet service. The expansion of free, unlimited WiFI makes New York’s airports—including LaGuardia, JFK, Newark Liberty International, and Stewart International—more competitive with other major destinations across the country, and will benefit millions of New Yorkers and visitors each year.

This announcement follows a key recommendation from CUF’s May 2018 Destination New York report, which called on the Port Authority to bring free, unlimited WiFi to New York's airports. The report found that tourism has become one of the four key drivers of job growth in New York City, but concluded that New York has never adequately planned for a city with 60 million tourists a year, or made sufficient investments in its tourism infrastructure to sustain this many annual visitors.