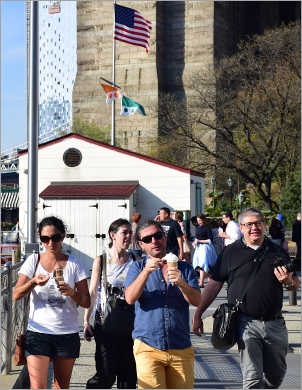 Over the past two decades, tourism in New York City has swelled from 33 million to nearly 63 million annual visitors. The city should make concrete efforts that recognize tourism’s role in the region’s economy, and plan to sustain it.

The 90 percent increase in tourists to New York City over the last two decades has sparked hundreds of thousands of new jobs in hotels, restaurants, retail shops, museums, airports, tour bus companies, and even travel-tech startups. More than 291,000 New Yorkers count on tourism for their jobs—putting it on par with the tech ecosystem, the creative economy, and the finance industry.

In this Gotham Gazette op-ed, Jonathan Bowles, executive director of Center for an Urban Future, Angela Pinsky, executive director of the Association for a Better New York (ABNY), and Tim Tompkins, president of Times Square Alliance, assert that the city needs to upgrade its tourism infrastructure. New York has never adequately planned for 60 million tourists a year, and it has not made enough of the infrastructure investments that are needed to sustain this many annual visitors.

This op-ed is a continuation of the Center for an Urban Future's extensive research on economic opportunity in New York, including the recent study Destination New York.

This op-ed was made possible by Times Square Alliance and the Association for a Better New York (ABNY).

General operating support for the Center for an Urban Future has been provided by the Clark Foundation, the Bernard F. and Alva B. Gimbel Foundation, and Altman Foundation. CUF is also grateful for support from Fisher Brothers for the Middle Class Jobs Project.