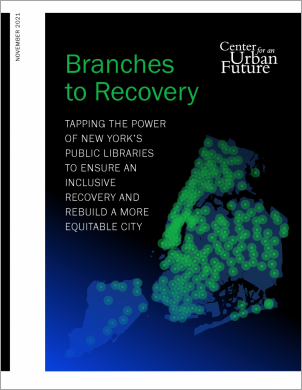 Branches to Recovery: Tapping the Power of NYC’s Public Libraries to Rebuild a More Equitable City

Libraries are already among the city’s largest and most trusted providers of programs and services aligned with New Yorkers’ greatest needs. With a clear citywide strategy and a new level of investment, their impact could be even greater.

Over the next five years, New York’s leaders should harness the unparalleled reach, trust, and capabilities of the city’s branch libraries to tackle the greatest challenges facing New Yorkers.

To unlock the full potential of the city’s public libraries to create and sustain a more equitable city for the long term, city leaders should commit to investing $1 billion annually—and focus that investment on achieving the following seven priority recommendations:

Helping New Yorkers Get Back to Work

Building Pathways to the Well-Paying Tech Jobs of the Future

The report was made possible by the Charles H. Revson Foundation,

Libraries Will Lead the Equitable Recovery

The NYPL’s temporary Grand Central branch won over the community. Now it might close

This study was made possible by the Charles H. Revson Foundation.

Libraries Will Lead the Equitable Recovery
Next City

Libraries Will Lead the Equitable Recovery
Next City