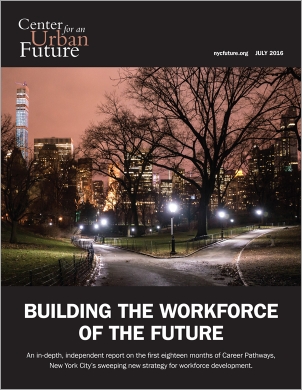 Building the Workforce of the Future

In November 2014, Mayor de Blasio launched a sweeping new approach to workforce development in New York City. Unlike the previous model, which prioritized connecting workers with available jobs as quickly as possible, the administration’s new Career Pathways framework focuses on helping jobseekers and workers to build the skills required to be more competitive in the labor force. Drawing from a broad range of stakeholders—including employers, providers of workforce services, and government officials, as well as representatives from labor unions, educational institutions, and private philanthropy—Career Pathways emphasizes training and education for workers and jobseekers, deeper connections with the city’s employers, and a commitment to improving working conditions for the city’s lower-wage workers.

This report is part of a series of policy briefs and commentaries about workforce development and human capital issues made possible through generous support from the Altman Foundation.

Refocusing the workforce development system could not have happened soon enough. The rapidly transforming labor market of the twenty-first century is making obsolete traditional ways of training and educating. Whereas a high school or college education supplemented by on-the-job training was once enough to ensure that workers were ready to perform their jobs well, today’s labor market demands that workers constantly upgrade their skills and learn new ones in order to remain competitive. Skills and credentials are the currency of the modern economy, and workers who lack them stand little chance of securing employment that assures them a decent living. Employers, too, choose to locate and grow where they have access to a talented labor pool, making a strong workforce development system an essential component of a comprehensive economic development strategy for New York City.

Now, more than a year and a half after the rollout, Career Pathways shows significant promise to reform and overhaul the way that the city funds, provides, and measures the success of skills-building programs. But what specifically has been accomplished so far, what challenges remain, and what additional steps should be taken in the months ahead by city officials, philanthropy, workforce providers, and employers to realize the ambitious vision set forth by Career Pathways?

This report aims to provide an independent assessment of the progress made since the launch of Career Pathways. Based on interviews with more than 30 workforce development experts, the study details where the administration’s new approach to workforce development has achieved success or taken important steps forward, where it has stalled, and what challenges have limited the new system’s effectiveness. The study also includes a series of recommendations to bolster Career Pathways.

This report is part of a series of policy briefs and commentaries about workforce development and human capital issues made possible through generous support from the Altman Foundation.