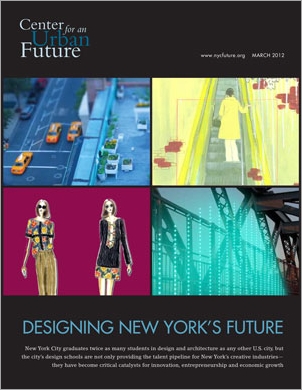 In addition, the schools have not yet managed to build the kind of interdisciplinary programs that can be found in a handful of top programs in other places. For example, Stanford’s d.school, a post-graduate, one-year certificate program, attracts a large number of business school students to its classes and studios; in fact, according to Ryan Jacoby, a d.school graduate and director of the New York office for IDEO, a large and innovative design firm based in Palo Alto, prospective business school students will oftentimes pick Stanford over other top schools just so they can participate in the d.school. Similarly, a four year-old, post-graduate program in London called Design London draws on the resources of three schools, at two major universities, to build interdisciplinary teams around projects with the potential to launch new businesses. Nothing quite like either of these programs exists in New York yet. Rather, many of the academic leaders we spoke to for this report say that building even modest bridges across different disciplines and schools has been a major challenge.

Now that Cornell and Technion Universities have been given the go ahead to build a 2,000-student applied sciences campus on Roosevelt Island, the school should consider developing a design component to one or more of their research programs. The Carnegie Mellon proposal for the Brooklyn Navy Yard was designed to capitalize on New York City’s creative community, particularly with respect to the film and digital media sectors. The Cornell/Technion partnership—or for that matter, Columbia and NYU—might consider doing something similar, or else they could build off of other local strengths like New York’s vaunted medical research institutions in Midtown. At a time when the returns on geographic proximity appear to be larger than ever, particularly in the knowledge and innovation economies, it seems like a big lost opportunity that so many new design contracts on medical products—a big and growing industry in its own right—go to firms in New England and California. 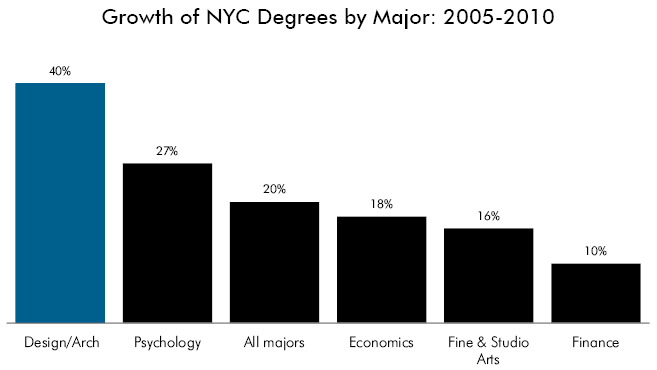 Over the last two years, economic development officials in the Bloomberg administration have pursued a number of important entrepreneurship initiatives. Besides the contest for a new applied sciences campus, they’ve supported a number of different incubators and work-share spaces, sponsored a high-profile competition for locally-based food manufacturers, and established several new programs to provide immigrant entrepreneurs with the linguistic help and training they need to get to the next level. However, with a few notable exceptions, they have not yet tapped into the entrepreneurial energy of the city’s design and architecture sectors or thought about how to leverage the more than half-dozen schools that supply those sectors with new talent.

But there’s a lot the city could be doing to capitalize on these strengths. For example, the city’s Economic Development Corporation (EDC) could take a leading role in bringing the different schools, museums and trade-show organizers together for a citywide and cross-disciplinary promotional event, something like London’s Design Festival, which links together hundreds of small venues and events in communities all over the city. The EDC could expand efforts to create work-share and incubator spaces: The agency has supported a number of these spaces in the high-tech and digital media sectors, but with the exception of a new fashion design incubator at the CFDA, it has not yet offered architects and designers the same support.

Creative businesses in the design and architecture sectors play a crucial role in the city’s economy, even when they don’t turn into multi-billion dollar corporations. In fact, even the smallest firms are capable of generating goods and services with a large number of applications. They keep older, larger firms honest by innovating new organizational structures and business practices and by breaking down industry silos. With a strategic plan centered on the city’s growing design and architecture schools, New York could encourage even more of this innovation and lay the groundwork for keeping the city’s whole creative economy among the largest and most dynamic in the world.

NYC a hot spot for architecture and design schools