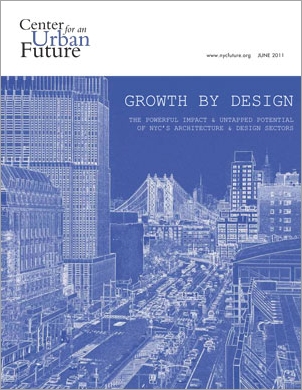 This report details the powerful economic impact of New York's architecture and design sectors. It shows that New York has far more designers than any other U.S. city, but concludes that far more could be done to harness the sector's growth potential.

Facing the possibility that New York City’s financial services sector will never again reach the job levels of 2007, city economic development officials are moving aggressively to identify ways to grow and diversify the economy. Policymakers have embraced sectors from digital media and biotechnology to clean tech. But thus far little attention has been paid to a part of the economy that has experienced phenomenal growth over the past decade and for which New York holds a significant competitive advantage: design.

Though fewer and fewer products are actually made in high-cost cities like New York, the Big Apple has cemented its status as one of the few global hubs for where things are designed. In 2009, the New York metro-region was home to 40,470 designers, which is far and away the largest pool of design talent in the country and among two or three of the largest in the world. In addition, no other American city has strengths in so many design fields—from architecture to fashion design, graphic design, interior design, furniture design and industrial design. 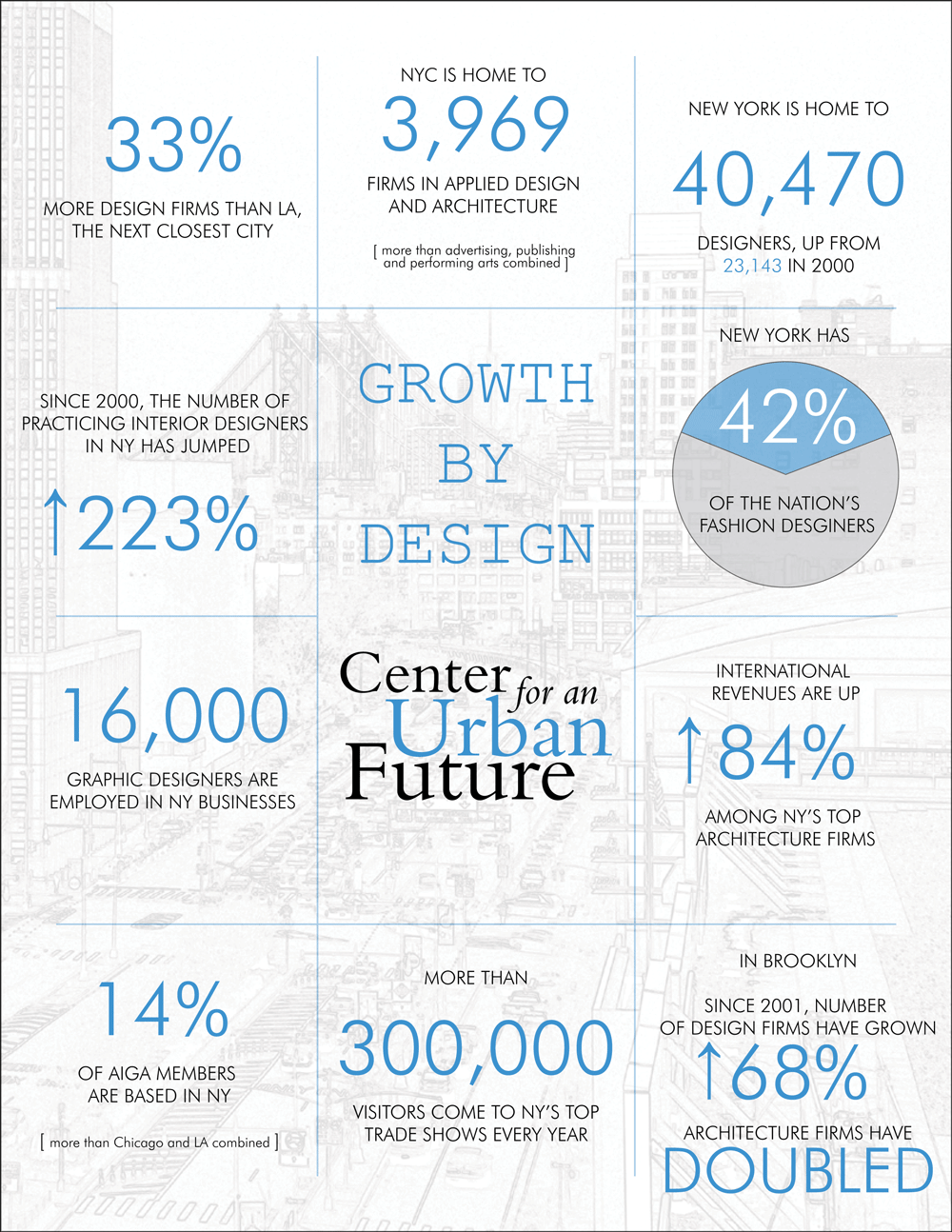 The design sector has also been expanding at a rapid clip. Between 2000 and 2009, design sector jobs in the New York metro area grew by 75 percent, with especially large jumps in the number of interior designers (which increased by 223 percent), graphic designers (139 percent) and industrial designers (127 percent). Moreover, increasing numbers of the city’s designers are now exporting their products, a huge plus for the city’s economy. Fashion design may be the best example of this, but there has also been a significant growth in the number of New York-based architects working on major building projects in Dubai, Abu Dhabi, Shanghai, Beijing and other fast-growing international cities. A number of New York graphic designers, interior designers and landscape designers are working internationally as well.

There is tremendous potential for future growth in design, and New York is well positioned to capture this growth. Yet, the sector also faces real challenges and growing competition, particularly from overseas cities. And as we document in this report, city and state economic development agencies have thus far barely begun to think about how to strengthen and support New York’s design industries.

The latest in a long line of Center for an Urban Future reports focusing on opportunities for New York City to grow and diversify its economy, this study documents the powerful and growing economic impact of a range of design fields in New York, including architecture, graphic design, fashion design, industrial design, interior design, and furniture design. The report concludes that design has become even more of a competitive advantage for New York in recent years and shows where New York stands in each design field among other leading cities. Based on interviews with more than two dozen designers, architects, representatives of design industry associations, academic leaders and government officials, as well as a focus group we held with seven young designers, the study also makes recommendations on what should be done to better support and grow this important, but often overlooked, part of the economy.

In some ways, technology has made geography less important for designers than it used to be. With the aid of the Internet and overnight courier services like FedEx, designers can now send mock-ups or floor plans to clients on the other side of the globe. They can build prototypes in their studios using sophisticated milling machines and 3D printers, and send the specifications to a manufacturer in China for mass production. However, in another sense, geography is just as important to designers and the design process as it has ever been.

Like other creative professionals, designers want to be near the production of art and culture in order to be inspired to produce new, cutting-edge ideas. They want to be near like-minded collaborators to join (or form) collectives, put on exhibitions, give lectures and teach at schools. Even completely informal gatherings at cafés and bars can turn into a future opportunity as Requests for Proposals (RFPs) are passed along or an unexpected brainstorming session leads to further collaboration. Economists have argued that such face-to-face interactions among creative professionals are an extremely important source of growth in a modern, post-industrial economy that depends heavily on innovation.

If so, New York has a lot to be optimistic about. 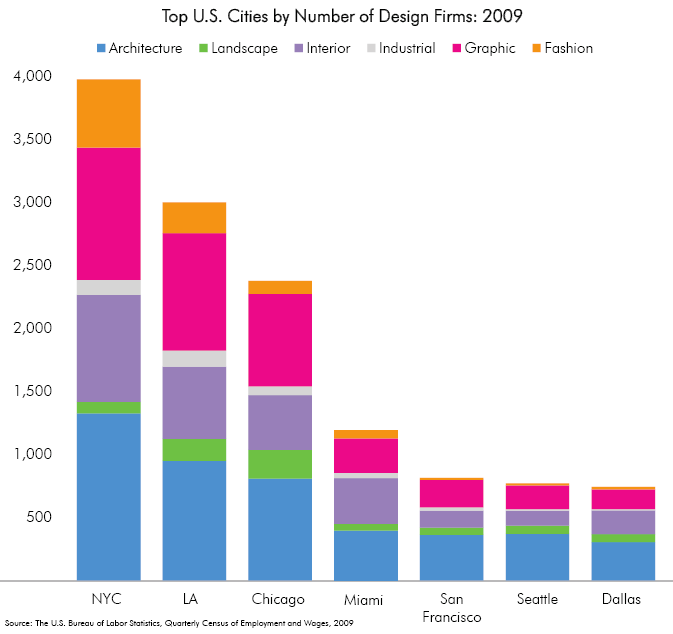 No other city in the country has as many leading firms in architecture, landscape architecture, fashion design, interior design, and graphic design. In 2009, for instance, the five boroughs of New York had 40 percent more architectural firms than the next closest U.S. city (Los Angeles) and two thirds as many as the third closest (Chicago). In Architectural Record’s annual list of top architecture firms by revenue, New York had more high grossing companies than any other U.S. city in the last five years. In 2010, New York had 18 firms in the top 250, while Chicago had 12 firms, Houston 11, Atlanta 9, and San Francisco 7. And that’s just measuring firms that are headquartered here; many of the largest firms that are based elsewhere have major offices here; for instance, Gensler, the number 2 firm on the list, is based in San Francisco but has its largest office in New York.

Similarly, over 800 fashion companies are headquartered in New York, more than double its next closest competitor (Paris).  New York also has 50 percent more interior design firms than Los Angeles, and nearly three times as many members in AIGA (formerly known as American Institute of Graphic Arts), an industry association for graphic design.

Landscape design is an area where New York lags in terms of its overall number of practitioners, but in this case the city is a clear leader in terms of innovation and influence. Several of the country’s most accomplished landscape design firms are headquartered in New York, including Thomas Balsley Associates, Michael Van Valkenburgh Associates, and Field Operations.

“New York is probably the global center for architecture, urban planning, urban design and landscape architecture,” says Tom Balsley, who has been practicing in New York for 35 years. “A friend of mine is a talent agent for Korean developers looking for New York-based architects. A lot of his clients may interview someone from Chicago or someone from San Francisco or L.A., but those places haven’t established themselves as global centers for architectural design like New York has.”

“There’s not a single publishing house in New York that doesn’t have a designer on staff. Random House, Knopf, FSG, and several others have a lot of them,” says Bill Drenttel, a partner at Winterhouse, a design consultancy, and co-founder of Design Observer. “Every magazine in the Condé Nast stable has at least five designers. The New York Times has around 40 or 50 designers. But also every finance firm has a marketing department with five or ten financial designers in it. For instance, Citibank has a huge design staff. Someone designs every store, every bank. It’s huge when you put it all together.”

New York’s design sector has never received as much attention as other key parts of the city’s creative economy, such as advertising, film, music or the performing arts. But, as we show in this report, there are actually more firms in the city’s applied design sector (2,554, not including architecture) than in any of the eight other sectors in the city’s creative core, a designation that includes publishing (1,028), film and video (1,855), music production (442), broadcasting (299), architecture (1,415), advertising (1,417), performing arts (1,048) and visual arts (805).

Perhaps even more importantly, design has been growing over the past decade. Both industry employment and occupational employment in design saw big gains during New York’s boom years between 2003 and 2008. Employment at design firms increased 45 percent in that time. But the growth in the number of designers working in the city was even greater (and more resilient in the face of the downturn that followed). In 2000, according to the U.S. Bureau of Labor Statistics’ Occupational Employment Survey, there were an estimated 23,143 designers working in the New York metropolitan area. By 2008, that number had almost doubled to 44,400.

Why Do Designers Have Designs in Brooklyn?

A Tale of Two Agendas

What’s the next vision for New York?

The Taxi of Tomorrow Is Great, But New York Needs More Design Thinking

Going With the Grain

There Are A Lot of Designers in New York City

Editorial: Creative Class on the Move

NYC is boomtown for design jobs