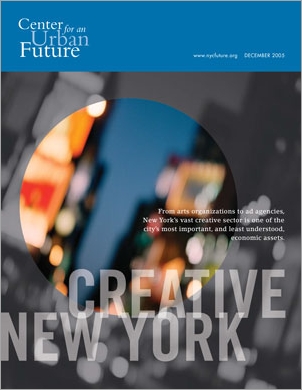 This groundbreaking report shows that New York's vast creative sector, from arts organizations to ad agencies, is one of the city's most important, and least understood, economic assets.


Creatives Are Being Priced Out of Gotham

Contradictions of the Creative Economy

Brooklyn’s ‘Creative Crescent’ In Danger of A Drought

Now that artists can’t afford the Arts District, L.A. needs to rethink its role as a creative city

Former Bankers Turn to a Creative Plan B

The City’s Next Steps to Ensure Vibrant, Creative Communities

Bust Can be Plus for Arts

Why is NYC’s Art Scene So White?

How To Make It In NYC As An Artist

How Brooklyn Got Its Groove Back

New York, Once A Lure, Is Slowly Losing the Creative Set

Creatives Are Being Priced Out of Gotham
Variety

Contradictions of the Creative Economy
The Clyde Fitch Report

Creatives Are Being Priced Out of Gotham
Variety

Contradictions of the Creative Economy
The Clyde Fitch Report