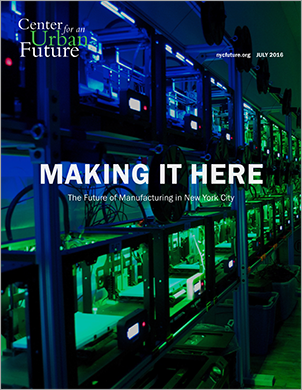 Making It Here: The Future of Manufacturing in New York City

A new wave of modern manufacturing companies are adding jobs across New York City, breathing new life into a sector that had been left for dead. Three of the city's manufacturing fields are particularly well positioned for growth in the years ahead: 3D printing, metal and wood fabrication, and food.

New York  City’s manufacturing sector received another dose of bitter news in January  when Cumberland Packing, the maker of Sweet’N Low, announced it was shutting down its Brooklyn factory and eliminating all 300 of its jobs in the borough. The decision was only the latest example of a large New York City–based manufacturer opting to close its doors or relocate operations out of the city, following recent exits by pita manufacturer Damascus Bakery, jewelry maker Frederick Goldman, Inc., matzo baker Streits, and adhesives manufacturer AP&G.

But unlike years past, the departure of traditional manufacturers like Cumberland is now being counteracted by a new wave of modern manufacturing companies that are adding jobs in the five boroughs and breathing new life into a sector that was all but presumed dead as recently as five years ago.

Previous publications in this series include “Manufacturing in NYC: A Snapshot” (November 2015) and “The Rise (and Fall) of Middle Wage Industries in NYC” (May 2016).

The city lost an average of 8,370 manufacturing jobs a year between 2001 and 2011, bringing the sector’s employment total below 75,000 jobs for the first time since the rise of the industrial city.  But since then, from April 2011 to April 2016, the city’s manufacturing sector has grown by 3,900 jobs, including 1,100 jobs in the last twelve months. This hardly makes manufacturing one of the city’s leading growth industries. Manufacturing accounted for just 0.8 percent of the 513,500 new private sector jobs added citywide over the past five years and the sector now makes up just 2.1 percent of all private sector jobs in the city, down from 5.7 percent in 2000 and 9.1 percent in 1990. But it represents the city’s longest period of sustained manufacturing growth in several decades and a much-needed shot in the arm for a sector that still provides a crucial source of middle-class jobs.

This report examines whether this growth can continue and which segments of the city’s manufacturing sector offer the greatest promise. The report—the latest publication of the Center for an Urban Future’s Middle Class Jobs Project, a research initiative funded by Fisher Brothers and Winston C. Fisher—also assesses what obstacles might inhibit additional job creation in the sector and what government policies could help ensure that the city’s manufacturing revival continues.

We conclude that there is clear potential for additional manufacturing growth in the five boroughs. However, our research suggests that some parts of the city’s manufacturing ecosystem offer significantly more promise than others. In particular, we find that three sectors are well positioned for future growth: 3D printing, metal and wood fabrication, and food manufacturing.

For this report, we asked dozens of industry experts—including company owners, leaders of industry associations and local development corporations, investors, economists, and academics—where they are seeing the most manufacturing growth in the city and which sectors are bestpositioned for future growth. 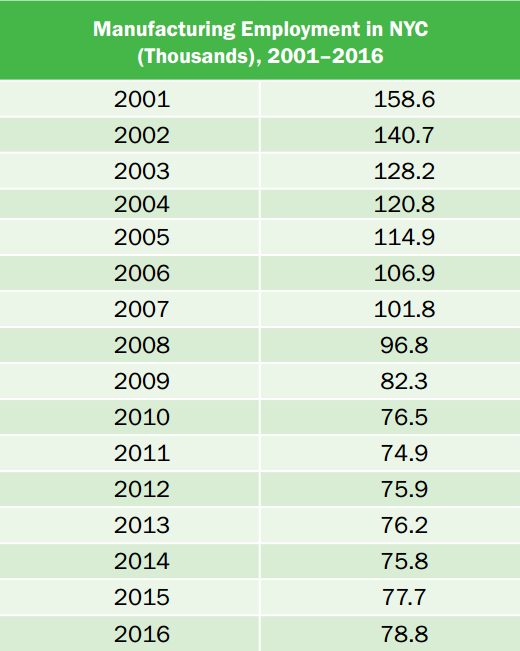 The broad consensus is that the city’s recent industrial growth is being driven by a new kind of manufacturing: small, entrepreneurial companies that are making specialty products mainly for individual consumers and businesses in the region. These makers and manufacturers are producing in small batches with quick turnaround times, investing in new technologies, capitalizing on connections to the city’s thriving creative industries—including design, fashion, and film—and taking advantage of powerful demographic, economic, and consumer trends. For instance, some are tapping into New York’s status as a leading center in the back-to-local movement, where a large and growing mass of consumers are demanding locally made, artisanal products. Others are benefiting from the city’s rapid growth in affluent residents, many of whom are willing to pay a premium for custom-made products.

Even the most optimistic manufacturing experts that we interviewed caution that many traditional manufacturers will continue to struggle. Indeed, even as employment in the sector has ticked up in recent years, the number of manufacturing firms citywide has declined from 5,976 in 2011 to 5,752 in 2015.

What we heard, again and again, is that New York’s competitive advantage in manufacturing today—and its best hope for growth in the future—is undoubtedly with small firms that operate in niche markets and take advantage of modern production processes. Labor market data supports this. In 2015, the average manufacturing company in the city had just 13.4 employees (down from 17.3 in 2000) and the average manufacturer in Brooklyn had 12 workers (down from 16.8 in 2000). In comparison, manufacturing companies in New York State employ 26.3 workers on average.

Small specialty producers are thriving in a variety of sectors, including fields where the overall employment trends have been negative, such as apparel manufacturing. With the right policies in place, opportunities exist to scale up companies in many of these sectors.

However, the experts we interviewed suggest that three of New York City’s manufacturing fields are particularly well positioned for growth in the years ahead: 3D printing, metal and wood fabrication, and food manufacturing.

3D Printing
There are no longer many manufacturing sectors where New York can boast a competitive advantage, but 3D printing is one of them. One of the industry’s leading online platforms, 3D Hubs, reported in July 2016 that New York “continues its reign as the 3D printing capital of the world.” According to its data, accessed in mid-July, New York is home to 3,739 makers and 516 3D printers, far ahead of second place Los Angeles (which has 2,557 makers and 410 printers), third place London (3,326 makers and 358 printers), and fourth place Paris (2,069 makers and 313 printers).

New York is widely known as the home base for 3D printing pioneers MakerBot and Shapeways. However, New York today is home to dozens of companies and thousands of makers in the 3D printing space. This includes companies that moved here from elsewhere—including Matter, a firm founded at MIT that relocated to Brooklyn in 2014—as well as a growing number of start-ups that were established by former staffers of MakerBot and Shapeways.

Although New York’s 3D printing industry has undoubtedly suffered setbacks in the past year—MakerBot recently announced that it would be outsourcing production and eliminating 200 Brooklyn jobs—the industry experts we interviewed are optimistic that the city is poised for additional growth. Indeed, many of those experts say that the industry is entering a new phase of growth, going beyond the production of individual products to develop applications for a wide range of businesses, from aerospace to healthcare. Overall, the 3D printing industry is expected to grow from $4.98 billion in 2015 to $30.19 billion by 2022, according to private research firm MarketsandMarkets. As we detail in this report, New York is well positioned to capture some of this growth.

Fabrication
Metal and wood product fabrication is hardly the best known industrial sector, but it is the city’s third-largest manufacturing industry, and one of a handful that has experienced employment growth in recent years. From 2011 to 2015, employment in the sector increased by 6 percent, from 6,570 to 6,980 jobs.

The city’s metal and wood fabrication companies have benefited from growing demand for high-end interiors, finishes, and furniture. Much of this has been fueled by the city’s sharp rise in affluent residents, whose luxury condos and second homes in the Hamptons often include custom furniture, metal railings, contemporary chandeliers, spiral staircases, and other handcrafted wood and metal furnishings. The explosion in high-end retail stores and restaurants has created additional market opportunities for New York’s skilled fabricators, as has the booming office market, the thriving film and television production sector, and a healthy museum and gallery sector.

As the city’s massive luxury consumer market continues to grow, there are ample opportunities for New York’s metal and wood fabricators to expand further.

Food
Of the twenty largest American cities, only two experienced a greater percentage increase in food manufacturing employment between 2005 and 2015 than New York. In the five boroughs, employment in the sector increased by 27 percent during this period, from 13,929 jobs in 2005 to 17,682 in 2015. That’s a faster rate of growth than Houston (where food manufacturing jobs increased by 15 percent), Seattle (+10 percent), San Francisco (-3 percent), Los Angeles (-11 percent), Chicago (-11 percent) and every other large U.S. city other than Phoenix (+45 percent) and San Jose (+28 percent).

A growing number of the city’s food and beverage manufacturers have succeeded in distributing their niche products beyond the five boroughs. However, there are clear opportunities to scale up more of the city’s food production companies.

Each of the three manufacturing sectors profiled in this report—3D printing, metal and wood fabrication, and food—have the potential to add hundreds if not thousands of additional jobs in the years ahead. There are also opportunities for growth in other manufacturing sectors, especially among small-batch manufacturers that cater to the local market and invest in technology.

But as we heard in our interviews, none of this growth is certain. Given that so many of the most successful manufacturers in the city are making products for consumers and businesses in the region, a slowing local economy could easily erase many of the recent employment gains. At the same time, manufacturing firms in the city face enormous hurdles. Some of the barriers—such as the diminishing availability of affordable industrial space—have plagued local companies for years. But other obstacles are fairly new. For instance, many of the manufacturing company executives interviewed for this report—particularly in 3D printing and fabrication, but also in apparel manufacturing and other sectors—cited challenges finding employees who have the advanced skills required for the kinds of jobs that are currently growing.

To its credit, the de Blasio administration has taken several important steps to address some of these barriers and support manufacturing. But more could be done. This report lays out ten recommendations to strengthen and support the kinds of manufacturing that have the strongest growth potential in the years ahead.
With the right support, New York can benefit from ongoing job growth in manufacturing—a sector that continues to provide New Yorkers from a range of backgrounds with a crucial pathway to the middle class.

Support for Center for an Urban Future has been provided by the Bernard F. and Alva B. Gimbel Foundation, the Lucius N. Littauer Foundation, and the M&T Charitable Foundation.


Brooklyn Lawmakers On The Move

Self-storage industry gears up for a fight with de Blasio

A Banker Turned Builder in Queens

New York employment bounces back from a lousy May

The city’s booze business is back, and the whole state is catching the buzz