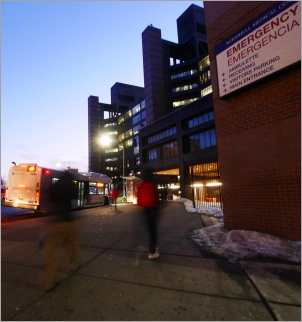 In this testimony before the MTA's Transit and Bus Committee, CUF policy director, Matt Chaban shares findings from a recent report on how healthcare workers have the worst public transit commutes of any New Yorkers, as well as ways the MTA can not only improve transportation for them but millions of other lower-income New Yorkers, as well.

Before the Metropolitan Transportation Authority Transit and Bus Committee

Good morning Chair Ferrer and members of the Transit and Bus Committee. My name is Matt Chaban, policy director at the Center for an Urban Future, a non-partisan think tank dedicated to growing and diversifying the city's economy and expanding economic opportunity for all New Yorkers.

At last month’s meeting, the new NYC Transit chief, Andy Byford, expressed interest in a bus action plan commensurate with the efforts to revitalize the subways. A week later, my organization released a report that we believe illustrates just how desperately both are needed. Entitled An Unhealthy Commute, the report highlights how healthcare workers, who make up the city’s largest industry, have the worst transit commutes of any in the private sector.

Among these half-million workers are plenty of doctors walking or driving to work, yet the vast majority are nurses, medical technicians, administrators, and home health aides. Most earn low to moderate wages, and, like so many other working New Yorkers, they are increasingly moving to neighborhoods along the periphery in search of affordable rents. But this also leads to grueling commutes of multiple bus and subway transfers to get to work. Compounding the issue is that fully two-thirds of all healthcare jobs are located outside Manhattan  —  a trend that is reshaping New York City’s economy and challenging the radial design of thetransit network.

The result is that the subways are far from the only thing causing pain for New York commuters. The lack of efficient and reliable service within and among the boroughs outside Manhattan is a transit crisis all its own. Nor will fixing the subways tame these issues.

Addressing the alarming condition of the subways is a clear first priority. But in order to tackle this parallel transit crisis beyond Manhattan, more resources and attention must be paid to the city’s struggling bus system and critical transit gaps. Focusing on achievable solutions to improve the efficiency and reliability of bus service, for example, would be a boon not only to the healthcare industry  —  whose job it is to save lives and provide care  —  but for millions of New Yorkers. More than 41 percent of the city’s workforce is employed outside  Manhattan, a share that has risen by more than 20 percent the past decade. As more and more New Yorkers scatter across the boroughs to live and work, it only increases the demand for more reliable mass transit.

The challenges facing the healthcare sector are both unique and universal. While almost everyone's commutes have risen the past two decades, this has occurred at almost three times the rate for healthcare workers, bringing the median commute to 51 minutes, 12 seconds. Partly to blame is the fact that one-third of healthcare facilities, including 21 hospitals and 67 nursing homes, are more than eight blocks from a subway stop. Yet so are buses that never arrive or speed by in over-capacity bunches.

In fact, while bus ridership has seen a recent decline system-wide because of such issues, it has risen dramatically on a number of lines that serve major healthcare institutions, where buses are often the only affordable option. The B4, serving Coney Island Hospital, Sheepshead Nursing, and Shore View Nursing and Rehabilitation, is up 39 percent between 2011 and 2016; the Q20 rose 9 percent and serves NYPresbyterian/Queens, Centerlight Healthcare, and Silvercrest Center for Nuring and Rehabilition; and the Bx24, whose route includes Calvary Hospital and Williamsbridge Manor, is up a whopping 134 percent.

The booming growth of healthcare workers outside Manhattan reflect wider residential and employment trends citywide. As more and more New Yorkers scatter across the boroughs to live and work, it only increases the demand, and strain, on mass transit.

Already this committee has shown a willingness to innovate in these areas, whether through Select Bus Service or the proposed Freedom Ticket to reduce commuter train fares within the boroughs. We urge you to be bolder still. Developing and implementing a Bus Rescue Plan that applies best practices from our report and the great work of the Bus Turnaround Coalition will be key. Better bus service is a goal within reach, and at a cost far below what it will take to restore the subway system.

In addition, commendable efforts to redesign decades-old routes, as in Staten Island, should be expanded to other bus-dependent neighborhoods throughout the city, and phase two of the Staten Island redesign should move forward swiftly. Cities like Houston and Baltimore, where the car rules, have reimagined their bus networks already. No reason that New York should be stuck with routes that still largely follow those of old trolley cars.

Yet the simplest step forward could also prove to be particularly effective. The MTA should create a healthcare working group in partnership with NYC DOT and employers and unions in the industry, that can tackle the issues facing the city’s half-million healthcare workers directly. It could be the first of many such working groups, and the start of a proactive approach to transit planning that looks not just at ridership numbers but employer needs, economic development, and the everyday struggles of hardworking New Yorkers.

As important as the city’s largest sector is, this issue goes well beyond healthcare workers. More and more low- and moderate-income New Yorkers are commuting within and across the boroughs outside Manhattan. The result is a perfect storm of brutal commutes, which reflects a deeper problem: that the MTA and New York City need to address major transit deficiencies outside the core subway service into Manhattan. Millions of workers not only in healthcare but also growing fields like education services, retail, and construction struggle with this reality every day. But with a commitment to revitalize the bus system and address transit gaps, this is a problem that can be solved.

MTA’S Uber Plan To Give Late-Shift Workers a Lyft