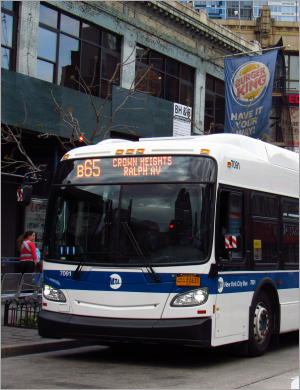 The MTA's launches a comprehensive plan to improve all 300 bus routes follows the recommendation of CUF's recently published report.

After months of anticipation—and decades of need—the Metropolitan Transportation Authority released the NYC Transit Bus Plan at the end of April. This sweeping proposal could transform nearly every corner of the city’s bus network, and by extension the city, which is what makes it so important and promising. While the subway crisis must also be addressed, reimagining the bus network for the 21st Century has the potential to affect even more New Yorkers, given its lower overall cost and the continued growth of jobs and population outside Manhattan.

The Center highlighted the enormity of this need in its January report, An Unhealthy Commute, by looking at the challenges facing transit riders in the city’s largest industry, healthcare. The report concluded little would change without a serious emphasis on fixing poor service and serious gaps within the bus network. This could only truly be achieved through a top-to-bottom review of the system, with an eye on growth not only of population but employment; the MTA plan draws on at least a half-dozen recommendations laid out in the Center’s report. Indeed, these issues go well beyond healthcare: though two out of three workers in that industry do not travel to work in Manhattan, 39 percent of all workers in the city are not bound for the borough on a daily basis.

The MTA’s Bus Plan recognizes this new reality and will take a detailed look at each of the city’s local and express bus routes to figure out how to serve communities locally and citywide. Those communities, along with the city’s police and transportation departments, are called upon for greater collaboration and integration, which should speed the deployment of new technologies while stepping up enforcement. In line with the report’s recommendation for such technologies and best practices, the new plan calls for steps such as all-door loading, signal prioritization, enforcement cameras, and next-generation fare collection.

Crucially, An Unhealthy Commute emphasized the enervating frustrations of a decades-old layout that failed put consider the needs of the modern riding public. The new NYC Transit president, Andy Byford, has emphasized a customer-first approach since arriving at the agency in January, and that extends for arguably the first time to transit planning, as well. Data and dialogue will drive new routes and programs. An important place both could start would be to draw on the Center’s recommendation to launch advisory committees or partnerships with major industries and employers in the city, starting with the healthcare industry. This could help inform the MTA’s planners not only of the demographic shifts that will shape the system, but also the economic ones.

Much work remains to be done to implement and fund this plan, yet it would not exist with all the work that has come before. As far back as 2011, the Center highlighted the trends of job and population growth necessitating this system-wide redesign in its report Behind the Curb. And tireless campaigning by the Transit Center, the Riders Alliance, the Bus Turnaround Coalition, and other advocates, as well as labor leaders like those at 32BJ SEIU, helped reach this point.

In February, the Center testified at the MTA’s monthly Transit Committee meeting on the importance of creating this plan to benefit working New Yorkers.

Some of CUF’s other recent studies and op-eds on the transit gaps outside Manhattan include The Transit Crisis Without a Rescue Plan and Weather Emergencies and Emergency Rooms.