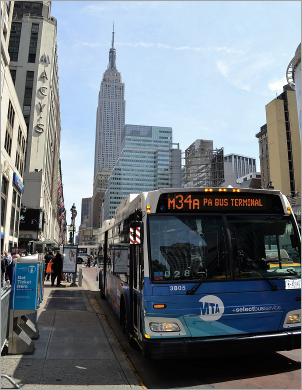 Op-Ed: The Transit Crisis Without a Rescue Plan

Even as the subways reach the breaking point, hundreds of thousands of New Yorkers face an additional commuting crisis: the lack of fast, reliable transit service in huge swaths of the boroughs outside Manhattan. No industry has felt the effects of these punishing commutes more than the city's healthcare sector.

With a new transit chief and subway action plan, New York City may finally be on the way to fixing the trains—a critical first step in turning around a failing system. Yet transit will forever remain on life support unless New York tackles the poor service plaguing neighborhoods citywide. No one is more effected than the city's healthcare employees, who face the longest mass transit commutes of any private-sector workers citywide — more than 51 minutes. The workers who heal us are hurting the most.

In this Gotham Gazette op-ed, CUF Executive Director Jonathan Bowles and Policy Director and Fisher Fellow Matt A.V. Chaban argue that this transit crisis lacks a rescue plan. For our city to run smoothly and efficiently for all of its residents, New York City and State need to prioritize improving transit service in the boroughs outside of Manhattan.

This op-ed is a continuation of the Center for an Urban Future's research on the links between the city's infrastructure and economic opportunity, including An Unhealthy Commute: The Transit Challenges Facing New York City's Healthcare Sector, a major report assessing the transit crisis and its effects on the healthcare sector.

This research was made possible by TransitCenter.

General operating support for the Center for an Urban Future has been provided by the Clark Foundation and the Bernard F. and Alva B. Gimbel Foundation. CUF is also grateful for support from Fisher Brothers for the Middle Class Jobs Project.


MTA’S Uber Plan To Give Late-Shift Workers a Lyft