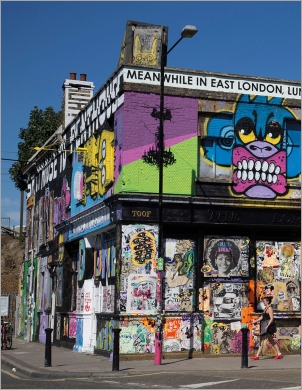 From escalating rents and operating costs to licensing and funding restrictions, the dance studios, music venues, theaters, workshops, and even skateparks that make London a global cultural capital are under unprecedented pressure. In New York, the echoes are unmistakable: at least 24 independent music venues closed between 2011 and 2015, and rents rose by at least 32 percent from 2000 to 2012 in the city’s neighborhoods most closely associated with art and creativity. Unlike New York, London has launched a plan to tackle this affordability crisis head-on: the Cultural Infrastructure Plan. Mayor Sadiq Khan's ambitious proposals seek to protect and grow spaces for artists to live, work, exhibit, and perform, while creating new training pathways for Londoners to access jobs in the creative economy.

In this op-ed for ARTnews, CUF Executive Director Jonathan Bowles and Editorial & Policy Direcor Eli Dvorkin argue that NYC should follow London's lead by developing new policies and progams that confront the affordability crisis facing the arts and nurture grassroots cultural spaces across all five boroughs.

Read the op-ed on ARTnews.

This op-ed is a continuation of the Center for an Urban Future's extensive research on the arts and culture in New York City, including the study Creative New York, which was generously supported by New York Community Trust, Robert Sterling Clark Foundation, Laurie M. Tisch Illumination Fund, Rockefeller Brothers Fund and Edelman, and the data brief "Artists in Schools: A Creative Solution to New York's Affordable Space Crunch."


The Deficiency of Bill de Blasio’s Plan for Cultural Equity

RT @KatelynAndrewss: Reading through the new @nycfuture recommendations to support older New Yorkers and I have to say, I LOVE the first on…
RT @gregmocker: Coverage tonight as the clean up from a big water main break goes on @PIX11News is the city investing in infrastructure? ht…
RT @CM_MargaretChin: Senior services only make up 0.5% of the City budget. We need to push every agency to step up to meet the needs of NYC…
NYC has made progress in replacing water mains the last 2 years. But over the past decade, NYC DEP has been consist… twitter.com/i/web/status/1…
Follow @nycfuture