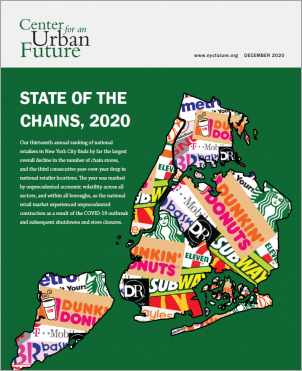 Our thirteenth annual ranking of national retailers in New York City finds by far the largest overall decline in the number of chain stores as the national retail market experienced unprecedented contraction due to the COVID-19 outbreak and subsequent shutdowns and store closures.

More than 1,000 chain stores across New York City—or a little less than one out of every seven chains that were open this time last year—have closed their doors over the past twelve months, underscoring the immense difficulties facing retail businesses large and small during the pandemic. Overall, the number of chain stores in New York City declined by 12.8 percent—with 1.7 percent closing temporarily and 11.1 percent not indicating whether the closures are permanent or temporary. This is by far the largest year-over-year decline in chain stores since the Center for an Urban Future began our annual analysis of the city’s national retailers thirteen years ago, eclipsing last year’s 3.7 percent drop and the 0.3 percent decline in 2018.

Our thirteenth annual analysis of national retailer locations in New York City, which is based on data from store locators compiled between November 16 and December 5, 2020, shows that the 319 retailers listed in last year’s ranking reduced their total footprint by 1,021 store locations (including 886 closures and 135 temporary closures). The number of chain stores declined from a total of 7,948 stores in 2019 to 6,927 stores in 2020—a 12.8 percent decrease.

While every borough experienced notable declines in chain stores, Manhattan had the biggest losses, with the number of chain store locations in the borough shrinking by 17.4 percent (of which 2.2 percent were closed temporarily). In fact, Manhattan accounted for more than half of all chain store closures (518 out of 1,021) citywide. Brooklyn had the second-largest decline (decreasing by 12.3 percent, with 2.4 of those temporarily shuttered), followed by Queens (down 9.4 percent, with 0.6 percent temporarily closed), the Bronx (declining by 8.7 percent, including 1.4 percent temporarily closed), and Staten Island (down by 7.6 percent, with 0.7 percent temporarily closed). This is the second consecutive year in which all five boroughs have registered declines, but it is the first year in for any borough to see a decline of more than 10 percent. Last year, the sharpest drop was a 4.9 percent decline in Queens (-91 stores).

Few retailers avoided store closures. Dunkin’ experienced a year-over-year decline in stores in the city for the first time since we began tracking chain stores thirteen years ago. Although Dunkin’ still has far more store locations in the city than any other national retailer, it has 18 fewer than this time last year. The city’s other big coffee chain, Starbucks, closed even more stores (49). Metro PCS, the city’s second-largest chain retailer, shuttered 135 stores over the past year—a bigger decline than we’ve recorded in any borough since this study began. Meanwhile, Sprint closed all 89 stores, though much of that likely stems from its merger with T-Mobile, which was approved earlier this year.

For the first time, our chains analysis includes a category of ‘temporarily closed’ to describe those store locations that retailers themselves indicated on store locators as temporarily shut-down (perhaps as retailers await a vaccine, or rosier economic climate). It is certainly possible that other closures that have taken place are also temporary but were not indicated as such on their store locators.

For example, restaurant chain Dig Inn (-19) has temporarily closed all but six locations, each of which is located in Manhattan. Clothing and accessories retailer Jimmy Jazz (-26) lists all 26 of its New York City locations as temporarily closed. Among health clubs and exercise studios, Soul Cycle (-21) reported significant temporary closures of 18 locations.

For several merchandise retailers selling clothing, shoes, accessories, jewelry, cosmetics, pet supplies, and vitamins, this year’s store closures likely have more to do with growing competition from e-commerce than with problems brought on by the pandemic. Apparel chains BCBG2 (-6), Motherhood Maternity3 (-7), and Justice4 (-6) closed all of their respective New York City locations in the pre-pandemic months. Athletic apparel retailer Modell’s5 shuttered all of its 43 locations after filing for bankruptcy in March. Stationery and greeting card retailer Papyrus announced its shutdown in January, and home décor retailer Pier 16 (-5) shuttered its remaining New York City locations, after filing for Chapter 11 bankruptcy in February. Clothing companies New York & Co.7 (-17), Dress Barn8 (-10), and Thomas Pink9 (-3) each closed all of their New York City locations.

The combination of the pandemic and headwinds from e-commerce prompted many other merchandise retailers to close a significant share of their stores in the city, including:

For most chains, however, store closings were a direct result of the COVID-19 economy. Burger King (-7) announced significant store closures in August, McDonald’s (-5) revealed plans in late July to close hundreds of stores nationally, Le Pain Quotidien (-25) sold its US assets via a Chapter 11 bankruptcy proceeding in May 10, and in September, Flywheel Sports11 (-11) closed all of its 11 NYC locations.

The pullback was broad-based among all sectors, with meaningful declines among sandwich shops, fast food burger chains, ice cream and yogurt chains, as well as among health clubs and exercise studios. 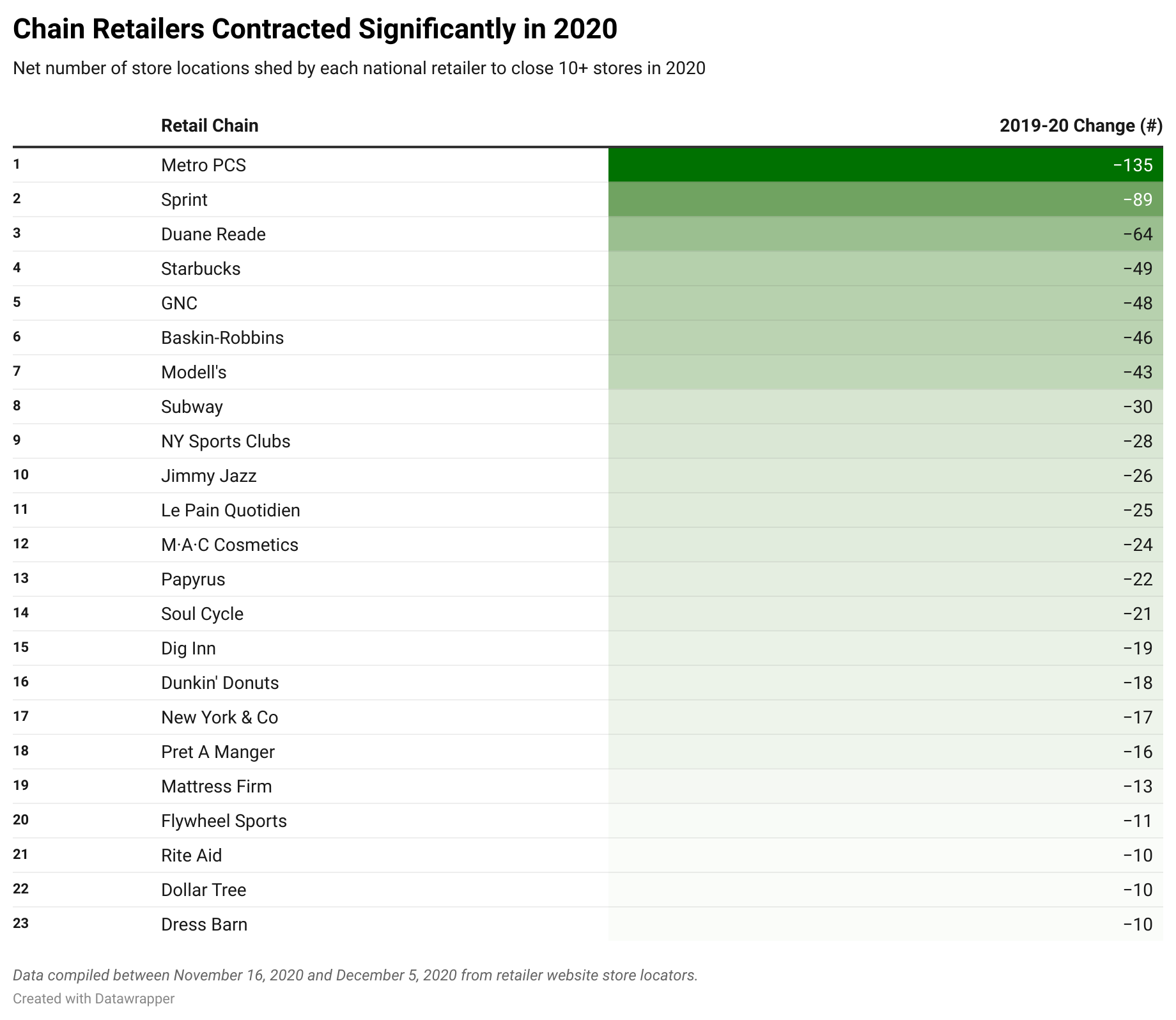 Among retail categories, all sectors were impacted by the decline in growth, with only five exceptions, shoes (+5), and home centers, wholesale clubs and jewelry and watches, which saw a gain of just one store each.

For the thirteenth consecutive year, Dunkin’ tops our list as the largest national retailer in New York City, with a total of 618 stores, a net decrease of 18 stores since 2019. Metro PCS is still the second-largest national retailer in the city, with 333 stores, despite losing 135 stores over the past year, largely due to their consolidations with parent company T-Mobile. Rounding out the top ten national retailers in New York are Starbucks (with 302 stores), Subway (257), T-Mobile (256), Duane Reade/Walgreens (253), McDonald’s (198), CVS (172), Baskin-Robbins (171) (with a significant 39 temporary closures), and AT&T (135). There are 14 retailers with at least 100 stores across the city, down from 15 last year.

Starbucks has more stores in Manhattan than any other national retailer, with 185 locations. In all other boroughs, Dunkin’ is the top retailer with 190 locations in Queens, 140 locations in Brooklyn, 88 locations in the Bronx, and 37 locations on Staten Island. In fact, Queens, Brooklyn, and the Bronx all share the same list of top three retailers: Dunkin’, Metro PCS, and T-Mobile.

Among the large pharmacy chains, Duane Reade/Walgreens remains the top pharmacy in all five boroughs except Staten Island, where CVS/Pharmacy sits at the top spot. After Dunkin’ Donuts, Subway remains the most popular fast-food chain in Staten Island, although in Queens, it's been surpassed by Baskin Robbins’ 71 locations. Once again, Starbucks is top among all food retailers in Manhattan; in Brooklyn, McDonald’s 50 locations still outpaces Starbucks’s 45 and Subway’s 44.

Only eight (3.7 percent) of the city’s 219 zip codes saw increases in the number of chain store locations. The biggest increase was in the 10456 zip code in High Bridge/Morrisania in the Bronx, and in Howard Beach (11414) in Queens, each of which saw a very modest increase of 2 locations.

1. Early in the year, Basin-Robbins expanded significantly, adding more than a dozen new stores across the city. Then, as a result of the pandemic, it temporarily closed 39 stores—including many of the new outlets, along with several of the longstanding locations. Overall, we show a net decline of 46 stores for Baskin-Robbins.

2. “Here’s A List Of 117 Bankruptcies In The Retail Apocalypse And Why They Failed”. Retrieved from: https://www.cbinsights.com/research/retail-apocalypse-timeline-infographic/

5. “Modell’s to close its remaining stores after bankruptcy filing”. Retrieved from: https://nypost.com/2020/03/12/modells-to-close-all-its-remaining-stores-after-bankruptcy-filing/

6. “Pier 1 Imports officially going out of business, closing all stores”. Retrieved from: https://www.nj.com/business/2020/06/pier-1-imports-officially-going-out-of-business-closing-all-stores.html

General operating support for the Center for an Urban Future has been provided by The Clark Foundation and the Bernard F. and Alva B. Gimbel Foundation.

This report was written by Marco Torres and edited by Eli Dvorkin and Jonathan Bowles.

NYC saw most chain store closures in over a decade in 2020: report

Over 1,100 chain stores have closed in New York City amid COVID pandemic

The growth of “pharmacy deserts”

One in seven - or 1,000 - chain store branches in NYC closed this year

One of Every Ten Brooklyn Chain Stores Closed in 2020

Where we are now: New York City after a year in the grip of pandemic

More chain stores close on Staten Island in 2020 than ever before, study says

Chain Stores Shut Down On Upper East Side In 2020, Report Finds

Starbucks closing some city locations as it moves to a smaller, pickup model

More than 1,000 retail chain stores have closed in New York City in the past year, new report says

Why SoHo Struggles and Indie Shops in Brooklyn Are Doing Fine

Over 1,000 NYC chain stores have closed this past year, the biggest drop in a decade

Chain Stores Take a Hit in NYC, Including on the Lower East Side

NYC saw most chain store closures in over a decade in 2020: report
Retail Dive

NYC saw most chain store closures in over a decade in 2020: report
Retail Dive