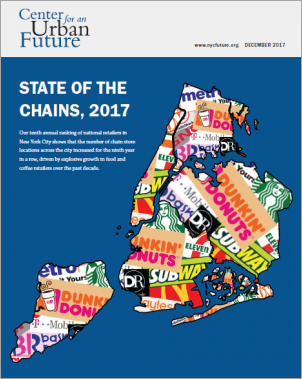 Our 10th annual ranking of national retailers in New York City shows that the number of chain store locations across the city increased for the ninth year in a row, but fewer chains have expanded this year than in the past.

The tenth annual ranking of national retailers in New York City by the Center for an Urban Future (CUF) shows a 1.8 percent increase in the number of store locations over last year.1 Though this is the ninth consecutive year with a net increase in national chain stores across the five boroughs, the growth was limited to a relatively small number of retailers.

In a year in which the challenges facing brick-and-mortar retail have burst into view, this report finds that New York’s national chains are not immune to the pressure. Although food establishments continue to show strong growth, retailers that compete most directly with online outlets—such as shoe and electronics stores—have experienced significant contractions. Overall, a fifth of all national retailers in the city closed stores in the past year, and only one-in-seven retailers on our list increased their footprint—the smallest share since we began keeping track a decade ago.

For the ninth consecutive year, Dunkin’ Donuts tops our list as the largest national retailer in New York City, with a total of 612 stores, a net increase of 16 stores since 2016—and 271 since 2008. But this year there is a new retailer in the second position on our list: MetroPCS now has 445 stores in the five boroughs, adding 119 locations over the past year and surpassing Subway, which is now third, with 433 stores.

Fast-casual dining chain restaurants in the five boroughs increased 105 percent over the past decade, from 141 to 289, while the number of fast-food restaurant chains grew 14 percent, from 1,107 to 1,261.2 And there are now 952 chain coffee shops in New York, 65 percent more than a decade ago, led by Dunkin’ Donuts. Food-related chains are responsible for 41 percent of the growth in national retailer locations in New York over the past ten years, the most of any category.

At the same time, there are fewer than half as many electronics shops in New York today as there were in 2008: down to 53 locations in the five boroughs, compared to 144 stores ten years ago. During the same period, the number of shoe retail chains decreased 16 percent, from 239 locations to 207.

CUF’s analysis shows that the 296 retailers listed in last year’s ranking expanded their footprint in New York City by 94 store locations, growing from a total of 7,223 stores in 2016 to 7,317 stores in 2017—a 1.8 percent increase. Chains gained locations in every borough except Staten Island. Only four retailers grew by more than 10 locations: Dunkin’ Donuts; Crumbs Bake Shop, which recovered last year from a near-bankruptcy under new ownership; and MetroPCS and T-Mobile, which are owned by the same company. MetroPCS grew faster than any other chain in this year’s survey. The cell phone retailer has now added far more stores since 2008 than any other brand (438, compared to second-place Dunkin’ Donuts’ 271 stores).

In addition to our customary analysis of the year-over-year change in the number and distribution of national retailer locations, this tenth edition also captures some trends for the entire past decade. In addition, we have organized the list of national retailers into business categories to break down broader trends across restaurants, pharmacies, clothing stores, and other segments of the retail industry.

In reviewing the past decade for New York’s national retailers, one thing is clear: the growth of restaurants and food retailers is leading the charge.

Cell phone stores have dominated the consumer electronics market in the decade since the iPhone was first released.

Other retailers competing directly with online marketplaces are showing signs of retreat.

For the ninth consecutive year, Dunkin’ Donuts tops our list as the largest national retailer in New York City, with a total of 612 stores, a net increase of 16 stores since 2016. MetroPCS has overtaken Subway to become the second-largest national retailer in the city, with 445 stores, after gaining 119 stores over the past year. Rounding out the top ten national retailers in New York are Subway (with 433 stores), Starbucks (317), Duane Reade/Walgreens (260), T-Mobile (236), Baskin Robbins (221), McDonald’s (215), Rite Aid (179), and CVS (149).3 Like last year, there are 12 retailers with at least 100 stores across the city.

The vast majority of national retailers—66 percent—maintained the same number of locations as last year, in contrast to the year before, when just one-third of all retailers remained flat. Only one in seven national retailers on this year’s list increased their footprint in the city by at least one store over the past year, compared to one out of five last year—the smallest share since we began keeping track a decade ago. About a fifth of all chains closed locations in the past year, including three chains that shuttered all New York City locations: Second Time Around and American Apparel, both clothing retailers facing stiff online competition, and Bally Total Fitness, which went out of business.

Manhattan still has more national retailer store locations than any other borough, through Brooklyn has been slowly eroding Manhattan’s share of the city’s national retailers. Over the past five years Queens’ share of the city’s chains has remained steady at 23 percent, the Bronx’s share has remained at 12 percent, and Staten Island’s at 6 percent. But Manhattan’s share has dropped from 39 percent in 2012 to 37 percent in 2017, while Brooklyn’s share has increased from 20 percent to 22 percent.

Starbucks has more stores in Manhattan than any other national retailer, with 223 locations. In Brooklyn, Queens, and Staten Island, Dunkin’ Donuts tops the list—it has 187 stores in Queens, 161 in Manhattan, 139 in Brooklyn, and 36 on Staten Island. But for the first time since we have been tracking this data, Dunkin’ Donuts’ lead in the Bronx has been overtaken by MetroPCS, which has 98 locations in the Bronx compared to Dunkin’ Donuts’ 89. In Brooklyn, MetroPCS is just one store shy of tying with the longtime leader. MetroPCS is the top cellular phone services retailer in each of the five boroughs.

Among the large pharmacy chains, Rite Aid is the top pharmacy in the Bronx, Brooklyn, and Queens. Duane Reade/Walgreens is the most numerous in Manhattan, and CVS has the top spot on Staten Island. After Dunkin’ Donuts, Subway is the most popular fast-food chain in each of the five boroughs.

Though both national retailer expansions and contractions were rarer this year than in previous years, there are still some areas of growth. The following retailers experienced significant store growth over the past year:

The largest national retailers are expanding all over the city. The following shows where the ten largest retailers added locations or contracted over the past year. For example, the number of Dunkin’ Donuts locations increased by 16 stores citywide since last year, including an increase of eight stores in Queens, four each in the Bronx and Manhattan, one in Brooklyn, and a loss of one on Staten Island.

1. CUF defines a “national retailer” as one that has at least two locations in New York City and at least one location outside the city limits.
2. For the purposes of this analysis, the category of fast-casual restaurants includes limited-service restaurants with made-to-order food and seating, such as Chipotle Mexican Grill and Chop’t Salad, as well as casual chain restaurants with table service, such as Applebee’s and IHOP. The category of fast-food restaurants includes traditional limited-service and/or takeout-focused chains such as McDonald’s, Subway, Burger King, and Popeyes.
3. Duane Reade was acquired by Walgreens in 2010. Although there are still Duane Reade- and Walgreens-branded stores throughout the city, we counted these stores together.
4. RadioShack has since closed its last three stores in New York.

This report was written by Christian González-Rivera and edited by Eli Dvorkin. Research support from Nicholas Hoynes and Lucas dos Santos.


Coffee’s in, shoes are out as New York’s retail sector competes with online shopping, report finds

The State of National Retailers in NYC; Dunkin’ Donuts Tops The List Again

Lower East Side Is Not Seeing More Chain Stores, Even as Mom-and-Pops Fold

Which chain stores opened and closed the most locations in Queens this year?

Number of Chain Stores Grows in the Bronx Again

Why Your Brooklyn Starbucks Will Be Closed This Afternoon

Don’t freak out (too much) about Five Below on Fifth, brokers say

Why That New Chain Store Just Landed on Your Block