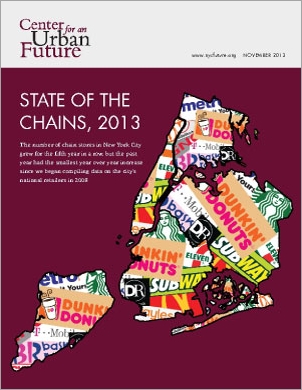 The number of chain stores in New York City grew for the fifth year in a row, but the past year had the smallest year-over-year increase since we began compiling data on the city’s national retailers in 2008.

Our analysis shows that the 302 retailers that were listed on last year’s ranking expanded their footprint in New York City from a total of 7,190 stores in 2012 to 7,226 stores in 2013, a 0.5 percent increase. This marks the sixth straight year there has been a net increase in the number of national chain stores in the five boroughs.

For the sixth consecutive year, Dunkin Donuts tops our list as the largest national retailer in New York City, with a total of 515 stores. Over the past year, Dunkin Donuts had a net increase of 39 stores in the city (an 8 percent gain). Subway is still the second largest national retailer in the city, with 467 locations across the five boroughs. It had a net gain of 28 stores since last year (a 6 percent increase). Rounding out the top ten national retailers in New York are: Duane Reade/Walgreens (with 318 stores), Starbucks (283), MetroPCS (261), McDonalds (240), Baskin Robbins (202), Rite Aid (190), T-Mobile (161) and GNC (138).

There are now 15 retailers with more than 100 stores across the city, up from 14 last year. Over the past year, 7-Eleven became the latest retailer with at least 100 locations in New York; it expanded from 97 stores in 2012 to 124 today. Other retailers that expanded their presence over the past year include Just Salad, L’Occitane, Trader Joes, Chop’t and Claire’s Accessories.

Despite expansions like these, 29 percent of the national retailers on our list reduced their footprint in the city over the past year, compared to 24 percent last year—with prominent retailers like Daffy’s and Blockbuster closing their New York stores entirely during the past year, and others such as Qdoba, Brookstone, Staples, Tasti D-Lite and Sunglass Hut downsizing significantly. Also, fewer retailers expanded their presence in the city this year; 27 percent of retailers on our list had a net increase in stores versus 29 percent last year.

Of all the boroughs, Brooklyn experienced the largest percentage increase in the number of chain stores over the past year. Between 2012 and 2013, the number of national retail locations in Brooklyn increased by 2.8 percent, going from 1,470 stores last year to 1,511 stores this year. It is the second straight year of significant growth for Brooklyn, which had a 2.6 percent increase in chain stores between 2011 and 2012. The number of chain stores also increased in the Bronx (+1.6 percent–from 849 stores in 2012 to 863 stores in 2013) and Staten Island (+1.7 percent–from 413 stores to 420), but declined in Queens (-0.4 percent–from 1,659 stores to 1,653) and Manhattan (-0.7 percent–from 2,799 to 2,779). Manhattan’s decline in national retail stores largely stems from closures in or around the South Street Seaport; indeed, while the borough had a net loss of 20 chain stores over the past year, the zip code representing the Seaport (10038) registered a decline of 24 stores, by far the biggest drop of any single zip code in New York. Many stores at the Seaport were shuttered as a result of the recent closure of the Pier 17 Pavilion, which is being demolished before undergoing a major redevelopment. Some other retailers in the 10038 zip code were forced to close due to damage from Hurricane Sandy and have yet to reopen.

Starbucks has more stores in Manhattan than any other national retailer, with 212 locations. In each of the other boroughs, Dunkin Donuts tops the list—it has 154 stores in Queens, 123 in Brooklyn, 72 in the Bronx and 32 on Staten Island.

Among the retailers with the largest numerical growth over the past year:

Among the retailers with the largest percentage growth over the past year:

Among the retailers that closed the largest number of stores over the past year:

Among the retailers that closed the greatest share of their stores, but still have locations in NYC:

Every year, we add new national retailers to our ranking. This year, we added four new retailers including: Buffalo Exchange, Buffalo Wild Wings, Moe’s Southwestern Grill and Second Time Around. Overall, there are 306 retailers on our list this year. Together, they have 7,250 stores across the five boroughs.

This year, for the first time, the 10001 zip code in Midtown/Koreatown that is home to the Manhattan Mall has more chain stores than any other zip code in the city. There are 184 national retailer locations in 10001 this year, overtaking the zip code on Staten Island (10314) that is home to the Staten Island Mall, which finished a close second with 183 chain stores. Other zip codes with large numbers of retailers include 10003 in Manhattan’s East Village, 10022, 10019, and 10036 in Midtown, and 11373 in Corona/Elmhurst, Queens. Brooklyn Heights 11201 is tied with 11234, home to Kings Plaza Shopping Center in Flatlands for the zip code with the largest number of chain stores of any zip code in Brooklyn. In the Bronx, Parkchester (10462) has the highest number of chain stores of any zip code in that borough.

Many zip codes also saw significant increases in the number of locations over the past year. The East Flatbush, Brooklyn zip code 11226 gained 12 chain stores since last year, going from 72 stores last year to 84 this year.  In Manhattan 10002 (Chinatown/Lower East Side) added 10 stores. In the Bronx, 10462 (Parkchester) gained five stores, while on Staten Island, 10309 (Pleasant Plains/Princess Bay) gained 5 stores, the most of any zip code in their respective boroughs.

A challenger to Dunkin’ Donuts and Starbucks emerges from South Korea

Why Are Brooklyn Neighborhoods Getting So Hard To Tell Apart?

RadioShack’s troubles spell opportunity for some

More Chain Stores Opened in Brooklyn Than Any Other Borough

A Dairy Queen Comes to Manhattan