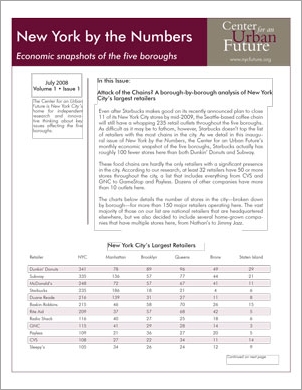 Attack of the Chains?

This inaugural edition of New York by the Numbers, a new monthly CUF feature, features a ranking of more than 150 national retailers with multiple stores in New York City, from Dunkin' Donuts (341 stores) to Crate and Barrel (2 stores). We provide a borough-by-borough breakdown of the number of stores each retailer has here.

Even after Starbucks makes good on its recently announced plan to close 11 of its New York City stores by mid-2009, the Seattle-based coffee chain will still have a whopping 235 retail outlets throughout the five boroughs. As difficult as it may be to fathom, however, Starbucks doesn’t top the list of retailers with the most chains in the city. As we detail in this inaugural issue of New York by the Numbers, the Center for an Urban Future’s monthly economic snapshot of the five boroughs, Starbucks actually has roughly 100 fewer stores here than both Dunkin’ Donuts and Subway.

These food chains are hardly the only retailers with a significant presence in the city. According to our research, at least 32 retailers have 50 or more stores throughout the city, a list that includes everything from CVS and GNC to GameStop and Payless. Dozens of other companies have more than 10 outlets here.

The charts below details the number of stores in the city—broken down by borough—for more than 150 major retailers operating here. The vast majority of those on our list are national retailers that are headquartered elsewhere, but we also decided to include several home-grown companies that have multiple stores here, from Nathan’s to Jimmy Jazz.

Dunkin’ Donuts: the Starbucks of Brooklyn

Are chain stores taking over NYC?

And what a year it was The Bronx saw its share of high drama, low comedy in 2008

Dunkin Donuts is the Top Chain

A Ceasefire in the Sunset Park Pizza War

Donuts are King by Number of Stores in New York City

Queens is running on Dunkin’: Report

No ‘shore-tage’ of doughnut shops