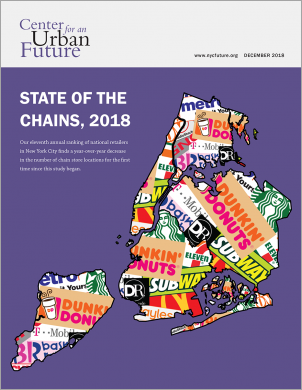 Our eleventh annual ranking of national retailers in New York City finds a year-over-year decrease in the number of chain store locations for the first time since this study began.

The number of chain stores in New York City declined by 0.3 percent over the past year, marking the first year-over-year drop in national retail locations since the Center for an Urban Future began our annual analysis of the city’s chain retailers more than a decade ago.

Our eleventh annual analysis of national retailer locations in New York also finds that a record 124 retailers—37 percent of the 331 national retail companies in our study—reduced their footprint over the past year. This compares to 99 retailers that registered a net gain in stores over the past year, and 108 retailers whose footprints remained unchanged. In fact, the number of retailers reducing stores is up by 91 percent; last year, just 65 of the retailers in our report registered a net decline in stores.

Overall, our analysis shows that the 331 retailers listed in last year’s ranking reduced their total footprint in New York City by 27 store locations, declining from a total of 7,876 stores in 2017 to 7,849 stores in 2018—an 0.3 percent decrease. The slowdown is led by Manhattan, where the number of chain store locations shrank by 2.3 percent—the sharpest single year decline to date. In every other borough, the number of chain stores increased again this year.

The pullback was most pronounced among merchandise retailers that are struggling to compete in an age of e-commerce, with broad-based declines among retailers selling clothing, shoes, accessories, jewelry, and cosmetics.

Although more than three dozen national food retailers increased their presence over the past year, there were roughly as many retailers in the food sectors closing stores, with the biggest losses among fast food sandwich shops and ice cream stores. The retailer with the single biggest drop in stores was Subway, which had a massive 103-store decrease in shop locations.

The biggest gains by far were among cellular telephone services locations, which added 129 stores citywide since last year. All five cellphone chains on our list gained locations: AT&T (+58), Metro PCS (+28), Sprint (+26), T-Mobile (+16), and Verizon Wireless (+1). Coffee shops had a net gain of 27 locations, with the growth concentrated in half of the eight coffee chains on the list, Starbucks (+15), Dunkin’ Donuts (+12), Blue Bottle Coffee (+2), and Joe Coffee (+1). There were also considerable gains among chain food retailers, with some surprising increases among traditional fast food restaurants, continued growth by fast casual chains, and sharp gains among bubble tea shops.

The number of chain stores decreased by 2.3 percent in Manhattan, which amounts to a loss of 67 locations. The other boroughs gained stores; however, Brooklyn and Queens each registered a net gain of just three stores. Among all boroughs, the fastest growth occurred on Staten Island (a 3.2 percent increase, or a gain of 14 stores) followed by the Bronx (a 2.0 percent jump, or an increase of 20 stores).

Starbucks has more stores in Manhattan than any other national retailer, with 227 locations. In Brooklyn, MetroPCS has overtaken Dunkin’ Donuts with 149 locations in the borough to the donut and coffee shop’s 141. This happened last year in the Bronx, where the cell phone retailer now has 104 locations to Dunkin’s 90. In Queens, and on Staten Island, Dunkin’ Donuts retains its lead, with 192 locations and 35 locations, respectively.

Among the large pharmacy chains, Rite Aid is the top pharmacy in the Bronx, Brooklyn, and Queens. Duane Reade/Walgreens has the most locations in Manhattan, and CVS has the top spot on Staten Island. After Dunkin’ Donuts, Subway is the most popular fast-food chain in each of the five boroughs.

Fewer national retailers expanded this year than at any other time over the past 11 years. However, the following retailers did experience significant store growth over the past year:

Clothing retailers have had more losses in retail locations than any other category in our analysis. Of the 86 clothing and accessories retailers we analyzed, 32 lost stores and 48 did not add locations. Of the 16 that expanded their footprints, none added more than four locations.

Every year, we add new national retailers to our ranking. This year, we added 9 new retailers: The UPS Store, Nordstrom, H-Mart, Dairy Queen, Key Food, Associated Supermarkets, Stop and Shop, Carter’s, and Foodtown. Including these new retailers, our complete list of 337 retailers has 8,175 store locations across the five boroughs.

Only 38 percent of the city’s zip codes saw increases in the number of chain store locations, the lowest share since we started tracking this information. For the second year in a row, the biggest increase was in the 10007 zip code in Lower Manhattan/Tribeca, which saw an increase of 16 locations, followed by a nine location increase 10027 (Central Harlem/Morningside Heights, Manhattan) and an eight-location increases in 10002 (Chinatown/Lower East Side, Manhattan). In the remaining boroughs, 10475 (Baychester/Co-op City, Bronx), 10309 (Pleasant Plains/Princess Bay, Staten Island), and 11413 (Springfield Gardens, Queens) all gained seven locations, while 11222 (Greenpoint, Brooklyn) gained six.

Notably, JFK Airport lost 11 chain store locations, the biggest drop of any zip code. This amounts to 19 percent decrease compared to last year. Brooklyn zip code 11234 (Flatlands) was a close second, losing 10 locations, followed by Manhattan’s 10024 (Upper West Side) at a loss of nine locations. In the Bronx, 10451 (Highbridge /Morrisania) lost the most chain store locations in that borough, at 7, and 10312 (Eltingville) on Staten Island lost 2 locations.

1. Duane Reade was acquired by Walgreens in 2010. Although there are still Duane-Reade- and Walgreens-branded stores throughout the city, we counted all of these stores together.

This report was written by Christian González-Rivera and Jonathan Bowles and edited by Eli Dvorkin. Research support from Guy Mika.

The Sweet Spot: How Dunkin’ Has Kept the Dough Rising Despite Retail Woes

National retail chains closing at a rapid rate in NYC

Rate of empty storefronts jumped by 45% - and it could get worse, report says

Chain Stores Are in Decline, Time to #ShopListener

Retail chains scale back in NYC in 2018, report shows

How to work retail in the middle of the retail apocalypse

Number of Chain Stores Continues to Decline Across NYC, Including Brooklyn

Five NYC Retail Chains Expand in 2019 While Others See Shrinkage

The Sweet Spot: How Dunkin’ Has Kept the Dough Rising Despite Retail Woes
Commerical Observer

The Sweet Spot: How Dunkin’ Has Kept the Dough Rising Despite Retail Woes
Commerical Observer